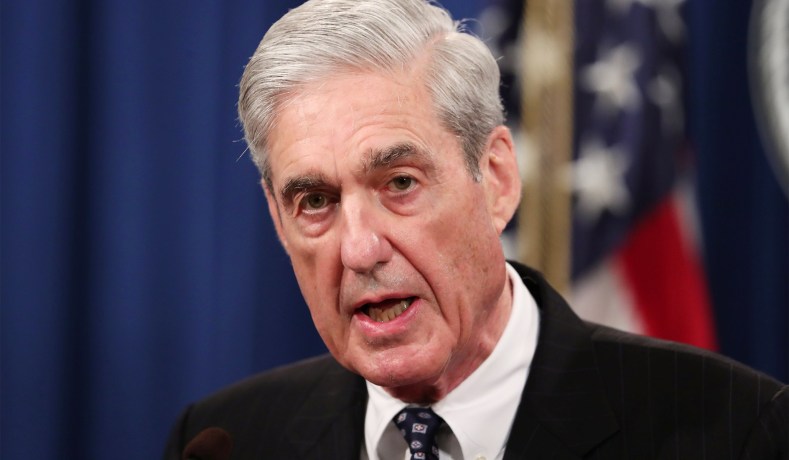 “Our government is busy making a weapon out of justice and unsanctioned thought, and you, friend, will be the target soon enough.”

Honestly, I thought that my April 24th article on Robert Mueller (here) would be my last.

Sadly, no one has ever lost money on underestimating the integrity of Mr. Mueller and the depths of his hatred – an emotion that is the most potent poison known. Once ingested, it’s always fatal.

Yesterday Mr. Mueller held a press conference after conveniently resigning from the Department of Justice first (surely Attorney General Bill Barr would have fired him immediately afterward for practicing law without a license had he still been employed).

Even for Mr. Mueller, his press event was a cobbled together string of non-sequiturs, misdirection, and half-truths. But it was delivered in the measured cadence designed to impart to the listener that he was the model of reasonableness and seriousness.

However, in one sense Mr. Mueller’s press conference is a perfect follow-up to the now infamous Mueller Report, which was itself a remarkably poorly written and defended collection of hokum, while part two sounded like the notes from a high school pajama party.

Inadvertently, between Mr. Mueller’s report and his press conference, we have yet another clear, flashing red warning light – DANGER AHEAD – as we swerve into the new America. And you best be on guard.

Our government is busy making a weapon out of justice and unsanctioned thought, and you, friend, will be the target soon enough.

These two separate lanes of concurrent events in our national affairs may seem unrelated at first, but the redefinition of justice and the race to criminalize unsanctioned thought, are very much on the same road.

The first, justice in our Constitutional system, is defined so that guilt must be determined through evidence, not suspicion or consulting Ouija boards. Mr. Mueller’s report and his press conference yesterday pulverized this legal bedrock.

The new standard is now “guilty until proven guilty.”

Mr. Mueller said he had no evidence but insisted that he didn’t have enough evidence to state that President Trump wasn’t guilty of obstruction of justice. Got it?

In the last few decades, the “legal industry” made up of all the interconnected parts of the legal machinery, like all huge businesses, has sought ways to keep the system it has created working at full capacity. In part, this has been a key driver for the creeping redefinition of justice that Mr. Mueller unambiguously endorsed yesterday.

This trend, which in fairness started decades ago, is beyond troubling; the legal industry is deciding for itself the limits of its power and the manner and legality of the processes it uses to deliver its justice.

In the second lane of events, our government agencies, government-sponsored agencies, and increasingly corporations are busily redefining free speech, freedom of conscience, and freedom of commerce. In the past, I’ve written about federal agencies and government-sponsored agencies that have taken it upon themselves to infringe on those activities that they have determined should be stopped.

As an example, I’ve written about the FDIC starting an internal program secretly pressuring member banks to drop all business arrangements and dealings with various legal businesses the FDIC didn’t like. Or, how the IRS took it upon itself to deny tax status to various conservative organizations they didn’t like, using the same reasoning.

Now, New York Governor Andrew Cuomo and his powerful state bureaucracy are attempting to intimidate banks and insurance companies into dropping their current or future business relationships with the National Rifle Association (NRA). Implicit is the threat that these financial institutions will come under intense government scrutiny if they don’t comply. (Many larger banks have been dropping businesses that sell firearms already.)

The City Council of San Antonio recently denied an airport location permit for Chick-fil-A, the third largest food chain in the country.

“Make no mistake, this was never about a chicken sandwich,” City Councilman Greg Brockhouse bragged after a subsequent vote upholding the Council’s original denial of permit rights. “It was about respecting everyone in our community, honoring faith and being all-inclusive.” One fears this is merely a precursor of things to come. Tow the radical vision or pay the price.

Also, the tech giants like Google and Facebook, are clearly setting up stringent speech codes using algorithms aimed at social and fiscal conservatives, using standards that will never be applied to the violent left, socialists or even communists.

There is no question that the limitation of free speech under various guises is coming if there is not a determined public outrage and pushback. It’s not hard to believe that orthodox Christians and Jews will soon be legally tested with “hate speech” codes of conduct and that financial institutions will be pressured to sever banking relationships; landlords will be forced to pull leases; and that the full power of the state will be employed to regulate speech and conscience anywhere, anytime.

These type of tactics are already being used in Europe and the UK, where citizens have been ordered to report to police stations to answer questions about their questionable social posts. In the UK last month, one man was sentenced to a jail term for a social media post concerning Islam.

China, of course, is introducing its “social credit score” whereby it grades its citizen’s behavior, job performance, social media posts, spending habits and loyalty to the communist dictatorship. Reuters reported recently that millions of Chinese have already found themselves unable to board an airplane, get credit, or change jobs under the system. And it is only in its early stages of implementation. (This is the same government that has imprisoned 1.5 million ethnic Uighur Muslims in concentration camps, and is breaking up and uprooting Christian house churches as fast as they can find them.)

Is this where we are headed?

The rule of law is being turned upside down, and freedom of expression, freedom to dissent, and freedom of conscience are being attacked like a skunk at the lawn party. All with the eager participation of the radical socialist left that has a stranglehold on the Democratic Party, and with the national corporate media complex cheering them on. The Republicans? They remain bystanders largely.

Once the demolition of these two foundational Constitutional precepts has begun, can it be reversed?

It’s the fight of our times.

﻿The New America; Guilty Until Proven Guilty was last modified: May 30th, 2019 by Michael Giere