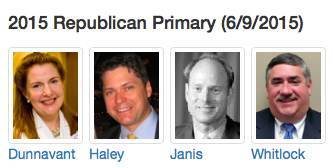 It seems we have a competitive campaign on our hands in the 12th Senate district to replace Senator Walter Stosch, with Vince Haley apparently having the edge according to a recent straw poll.[read_more] 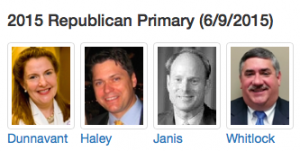 All candidates have turned in strong fundraising numbers, especially given the fact that it is a four-way race. Dunnavant is probably the most surprising with her numbers since she entered the race so late.

In the 12th District, four candidates are seeking the Republican nomination to run for the seat of retiring Sen. Walter A. Stosch, R-Henrico. There is no Democratic candidate.

Lawyer Vincent Haley, a Newt Gingrich operative, reported raising $80,736 in contributions, but more than $50,000 in expenditures. He ended the period with $24,264 in cash on hand.

All these candidates are doing their due diligence to reach out to the grassroots and key activists. None seem to be taking anything for granted. However, in a Henrico straw poll this week at a Henrico candidate forum, Vince Haley won convincingly (raw vote tally below):

I know or have met all these candidates. They all have something to offer Virginia and their local constituency, but Vince seems to have the early lead. He also enjoys the support of the many fantastic grassroots supporters who helped getÂ Dave Brat elected. In fact, Vince Haley even has hired Dave Brat’s campaign manager! HaleyÂ certainly seems to have the current momentum.

It will be interesting to see if the retiring state senator, Walter Stosch, chooses to endorseÂ one of these candidates or decides to sit on the sidelines. StoschÂ has a very moderate Republican voting record, so it could potentiallyÂ hurt the candidate in a primary. I guess we shall see…

If Janis can turn his peeps out Monday for the Henrico GOP forum, there will be a straw poll. If it looks like a poor turnout, Ray Allen will refrain from having a straw poll. That is the way he operates.

The candidate forum was well publicized by all four candidates. All 4 worked hard to get their people out. Turns out, several Haley supporters like myself were in Hanover the same night for a critical South Anna Magisterial District Chair vote. So the numbers would have been another 6 or 7 for Vince easily.

I do know 2 Whitlock supporters were with me. So Eddie would have 5 votes. Sorry, Eddie. I like you a lot, but it is time to step aside. Seriously.

Vince missing his vote for Dave Brat is nothing to dismiss. It has driven home to him the importance of voting absentee in advance to avoid this debacle. I can assure you the vast majority of Brat primary supporters are STRONGLY behind Vince.

The other two candidates have STRONG ties to the slating travesty pertetrated on the grassroots last year. They are to be avoided like the plague.

And one of them has direct ties to Ray Allen and Eric Cantor. In addition, he has a documented history of walking out if committee votes on crucial issues such as higher taxes and assaults on out Second Amendment rights.

One last item. Can someone please ask the good doctor why she has “scrubbed” the Stolle name from ALL campaign materials???? What is she ashamed of?

It was a fair forum, well-attended and very helpful to see all four candidates side by side, answering the same questions. Vince won by speaking coherently and with clarity…and by giving voters a real choice this primary. No one deserves to be crowned the nominee. Vision and a plan matter.

Funny how Eddie Whitlock claimed to be the clear winner. What was he thinking? Why would you only bring 2 supporters?

A straw poll from a Henrico TEA party meeting. Not exactly an objective poll, Jamie…

This meeting was a public forum in a public venue (not the regular TEA party meeting venue) hosted by the HCTP and both Janis and Dunnavant, as well as the Henrico GOP publicized this event.

So Haley didn’t support Brat in the primary, but he has a good excuse?

I know more than one person who missed that vote who was supporting Dave, and one, if not more who supported Cantor and missed the vote. Are you saying they didnt support who they supported as well? That makes no sense man.

You just sound like a bitter Cantor clinger who is supporting Bill Janis.

In fact, here is the schedule for the train… http://www.vre.org/service/schedule.htm. It would appear that a “late” train could be no more than about 15 minutes off due to the frequency of stops… Anybody smell BS? Yeah… Me too. Another thing that stricken me here is Haley wrapping himself in Dave Brat when Brat has NEVER endorsed him, I mean, it makes total sense for a guy who has made a career working with Newt Gingrich, but I’d look more closely at who he’s been with for a decade (all while never donating a dime to a Virginia race) than the guy who he forgot to support in the primary… Just saying.

Bitter Cantor Clingers complaining because Dave Brat had one fewer REPUBLICAN vote in the primary. What makes you more upset, the fact that Cantor is a loser or that Bill Janis isn’t getting the support of the people who took down Cantor (aka WINNERS)?

Boo hoo Eric lost. Boo hoo Janis is more of a waffle chef than a legislator. Boo hoo boo hoo boo hoo. CVS has klenex on sale, I will let you borrow my CVS card if you need it.

People really dislike Janis and he is a lacky for the establishment and a career politician. Haley is running on big ideas and policies. Just accept that your candidate is inferior and move on. There will be plenty of other races to support Ray Allen candidates.

Your link to the “Train Schedule” shows when the trains are “schedule” to arrive at those stops. It will not show when a train is late due to unforeseen problems that can and do come up. You have no way to disprove what Vince said about the train being late unless you were on that same train the same day and time. Bogus argumentative point.

Kevin, as a witness to the public badgering Bill Janis gave Dave Brat prior to the primary and as a witness to Mr. Janis wanting to be Dave’s BFF after he won, you have no ground to stand on. Dave is NOT endorsing anyone, regardless of how many photos Bill puts of he and the Congressman on his Facebook page. Anyway, even if Dave did vote for Vince, that would just be one vote. But it’s the thousands of Brat supporters who are wrapping ourselves around Vince. That’s what he and you should be concerned with.

There’s a rumor going around that Vince Haley didn’t even vote in the Brat Cantor primary. Can someone confirm this for me?

Thanks for publicizing a rumor that’s going around.

Ok, so let’s put this rumor to rest and report the truth. As the Henrico County Coordinator for Dave Brat in both the Primary and the General election, and in doing my due diligence vetting any candidate I’m asked to look at, I checked out Vince’s voting record. You are correct, he did not vote in the Primary. I had a conversation about this with Vince and this is what he shared. “The Sunday before the primary, a volunteer came to our door with the Dave Brat campaign. Afterwards, I told my wife that Dave Brat wants my vote and I’m going to give it to him.” Vince commutes to his DC area job by train, and guess what happened, the train was delayed that day and he didn’t get back in time to vote. He now knows the importance of an Absentee Ballot. Now you know the truth but know this too, as an original Brat Packer I am all in with Vince, as he best represents me, my principle and values. He is a constitutional conservative who believes that we need to limit the power of government, particularly what the EPA wants to do, reduce and eliminate taxes and put the power and money back into the hands of the people. He understands what self governance really is! I have gotten to know Vince over the past 6 months, and what I’ve seen is that he is a good man, an honest man, a man who wants to do what is right by the people.

I tell everyone: “If you like Dave Brat, you’re gonna LOVE Vince Haley.” If you voted for Eric Cantor, ……..well.

Those were the most expensive waffles in Virginia history. Good to know Bill Janis will stand down when the RINO leadership asks him too. Yep, a guy who stayed home from work and missed a huge vote is spreading rumors about a guy who missed a vote because he was at work. Don’t you just love chicago politicians like Bill Janis?

There is a rumor going around that Janis badgered Dave Brat multiple times why video was rolling, at a Henrico GOP breakfast.