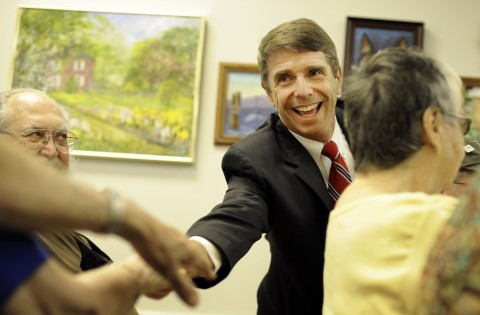 The 2017 Governors Race continues its disappointing ebb and flow, at least for liberty-voters and historical conservatives. Congressman Wittman’s announcement that he will not be seeking the Republican Party’s nomination for Governor has left thousands of conservatives across the Commonwealth asking themselves whether or not there will be any candidates worth voting for in the primary.

While Ed Gillespie continues to roll out prominent endorsements from easily recognizable TEA Party leaders, there is a great deal of divisiveness and confusion amongst the conservative grassroots over whether or not they can rally around a TARP architect and prominent D.C. lobbyist Ed Gillespie.

The Bull Elephant published an endorsement of Gillespie by Rick Buchanan, who argued that “Ed is a tireless campaigner who has proven he can share our conservative ideas in a way that appeals to all Virginians.”  All Virginians? Maybe compared to his opposition at present.

I asked Waverly Woods, a prominent TEA Party activist, founder of Virginia Freedom Caucus, and Corey Stewart supporter, why she wasn’t supporting Ed Gillespie. She said, “Because I want to drain the swamp, not drink from it.”  Woods also explained that several TEA Party leaders “had a private meeting of about twenty people, the likes of Dick Black, Jamie Radtke, Bob Marshall, Martha Boneta, and Rick Buchanan being some of the people in the room, who I have since dubbed the Gang of Twenty,” in order to galvanize support for Gillespie.

While the leaders of the conservative movement in Virginia are sold… are you? Should you be?

Woods admitted that these are “strong conservatives with good values and principles,” but that they are not “the pied piper of We the People.” In other words, these prominent conservative leaders don’t speak for, or shouldn’t speak for, all of the people in Virginia’s diverse TEA Party population.

Ed Gillespie has a remarkable willingness to reach out to local leaders, to listen, to hear concerns, and to address those concerns; which no doubt is the explanation for all of the support he has received. I can personally attest to the fact that Gillespie is reaching out to Conservatives, is listening to their concerns, and is adopting feedback.

However, when my Congressman, Rob Wittman, first told me that he was thinking about running for Governor, the first thought that crossed my mind was that he, unlike Gillespie, had a life long history in the Commonwealth and was a staunch supporter of our military. First, he represented us as a town councilman in Montross, Virginia, and then as Mayor. Then Rob Wittman was elected to his local Board of Supervisors. Then he was elected as a Delegate to the General Assembly in Richmond. Then he was elected as a Congressman from the historic 1st District.

My Congressman and I have had some legislative and ideological differences, but I also thought, “here is a guy who understands every level of State Government, who won’t forget the farmers, the clerks at the coffee shop or the antique store, the franchisee, the unit chairmen, or the astute conservative activist.” The idea of Congressman Wittman running for Governor felt right. He listens to his constituents; and when they are unhappy he makes an attempt to reflect their will in his votes in our nation’s Capitol. Congressman Wittman would have represented the average Virginian in the Northern Neck, in the Southwest, in Coal Country, in Danville, in Roanoke, in Blacksburg, in Norfolk, and in Loudoun County.

With Wittman’s exit, what are our choices? There is the popular choice of Ed Gillespie, who has been reaching out to every sector of the Commonwealth’s political universe since November of 2014. There’s Prince William Board of Supervisor and Trump’s one-time Virginia surrogate Corey Stewart. And there is Democrat-lite, scourge of Virginia Beach and Norfolk, State Senator Frank Wagner.

What’s a conservative to do?

Cruz, Rubio, and Kasich people are unlikely to back populist firebrand Corey Stewart. Republicans who don’t have substantial financial interests currently on the line in Richmond aren’t going to back Frank Wagner. And yet, here Gillespie is, rolling out the endorsements, making the phone calls, winning hearts and minds. What do you think is going to happen?

I won’t pretend that I am entirely neutral. People who know me know that I do not endorse Corey Stewart. However, those same people also know that I won’t make public the depth and breadth of my complaints. However, some conservatives in Virginia look at Stewart as the aggressive, loud populist who marshaled Trump’s unsuccessful campaign in Virginia. Others view him as the radical populist who got fired from the Trump Campaign for sticking up for “the people.” Regardless, Corey seems interesting to folks looking not to vote for Gillespie. He’s the anything-but candidate. Stewart is the candidate who appears to be there for “the people.” It’s just that, at the State Convention, he wasn’t there for me.

For all the pros and cons on Wagner, let’s just let the Democrats offer their defense. It would be simple to have two democrats in the same general election right?

Again, what is a conservative to do?

We can settle for Stewart or settle for Gillespie. This isn’t a suggestion, mind you. It’s what we see all around us. TEA Party – Grassroots – Activists. They are picking sides, one direction or the other. With Rob Wittman no longer in the race, unless someone else throws their hat in the ring, what else are we to do?

Conservatives do not have to settle if they do not want to do so. Reach out to your candidates. Demand your voices be heard. Demand representation. Clearly, promises are being made to leadership in your local organizations. Those same promises should be made to you. I know we’re all looking for someone to fight against the corporatism and corruption in Richmond. Maybe that’s Gillespie. Maybe that’s Stewart. We’re all going to have to decide.

We need a candidate that all Virginians can get behind. Have we found them?

Or have they found us?