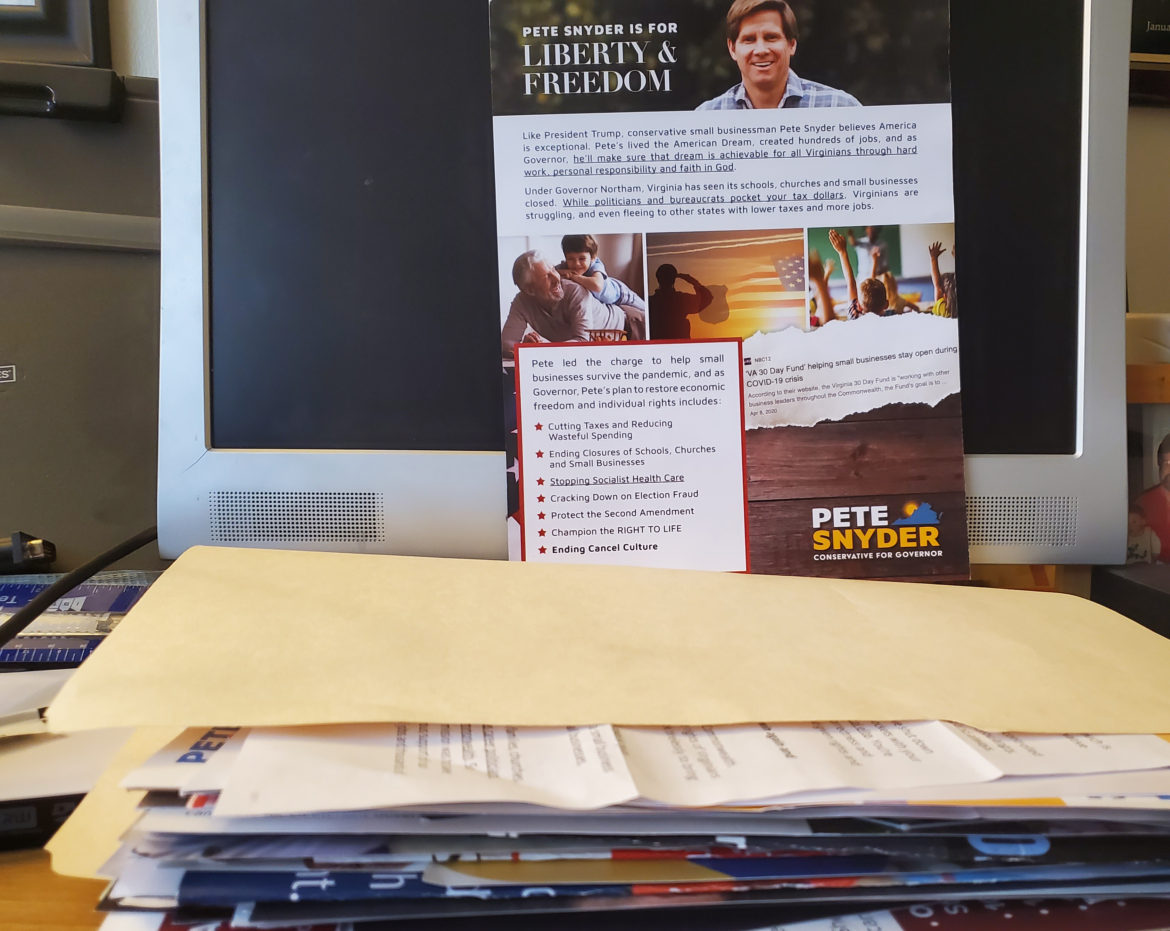 A 2-inch stack of direct mail from the recent GOP nomination campaign for all candidates and races -- but much of it designed to help Pete Snyder and trash his opponents. He lost.

2021 Convention Recap – GOP delegates picked a great ticket, but will Chase ruin it for them and House of Delegate candidates?

Did Pete Snyder lose due to being overzealous and over strategizing?

The Republican ticket for the Nov. 2 election for governor, lt. governor and attorney general, led by  former Carlyle Group CEO and devout Fairfax County Christian Glenn Youngkin, is a great one, given our difficulties as a party to gain traction with voters in an increasingly “Blue” Virginia.

While I voted Youngkin  No. 3 in the rank-choice voting at the May 8 unassembled convention, Youngkin brings a lot of value to the race, given the real possibility former Gov. Terry McAuliffe, a multi-millionaire in his own right, will be leading the Democrats after their June 8 primary.

The presence of Winsome Sears of Winchester as Lt. Governor candidate for the GOP  — believed to be the first African American woman nominated for a statewide  office in Virginia history  — plus Virginia beach Delegate Jason Miyares, whose mother fled Castro’s Cuba, is also amazing.  We have regional and racial balance, which is so lacking in our party.

In addition, the estimated 98 Republican candidates seeking to be the ones to give us six seats to take over the House of Delegates should be pleased.  Youngkin, unlike other statewide candidates we have nominated since 2009, will not embarrass these candidates and force them to keep their distance.  Rather, they will embrace Youngkin, if only for his significant financial and manpower resources.  They will complement each other, and Sears and Miyares will, too.

We can thank the 30,566 of 53,914 registered Delegates for not giving the governor’s nod  to extremist state Sen. Amanda Chase, who would have dragged the ticket down and resurrected “Trump” as the only reason for Virginians to vote.

I still wonder if Chase will be pushed by the Trump wing of the party to go independent.  Deadline to file the 2,000 signatures on petitions is June 8, and Chase told me to my face in March that she was carrying petitions.  (the State dropped the 10,000-signature requirements)  Should she go indy, it not just hurts Youngkin, but the rest of the GOP.

I am still intrigued how Pete Snyder lost since he entered the campaign in a great position.

Snyder had the media savvy, too, with years as a Fox News analyst.  He had the money and the good looks as well – and a record of helping businesses in distress due to lockdowns.

Snyder had the State Central Committee in his pocket, which chose the convention over a primary after months of infighting – in the hopes of killing Chase’s chances winning a plurality and nominating the least RINO of candidates.

Only part of the SCC majority’s “strategy” worked.  Chase was kept off the ticket, but Youngkin was not the most conservative candidate to win.  And, Chuck Smith, a favorite to the pro-Trump “RINO cleansing ” wing of the party, also.  Sears, their other champion, only pulled it out after six rounds of ballot counting.

Besides the SCC, Snyder had an amazing coalition of backers, including former RPV Chair John Whitbeck (StratPoli strategizing) Trumpsters, Cucc-bots (including Ken Cuccinelli himself), plus Big Business and country club  Republicans.

While I can’t prove it, I believe the political action committee (PAC) ads and direct mail deluge against Youngkin and Chase were done at Snyder’s behest – and delegates turned against him due to the negativity. Most of my pile of direct mail (seen in the photo) is from those PACS and thus, voters did not put Snyder in their top 3, which sunk him

In short, Snyder lost, I believe, because like King Saul, he was overzealous in the pursuit and tried to destroy Youngkin as Saul failed with David.  I talk a lot about “campaign zealotry” in my book on running for local office, too.

My hope for Pete is that he learned some lessons about overzealousness and seek elected office again, though this is his 2nd failed attempt for the GOP nomination for statewide office (lost nomination in 2013 for Lt. governor).

For the rest of us GOP activists and voters, please unite behind this ticket and put aside disagreements so we can Keep Virginia Virginia and not let the Democrats turn it into New Jersey or California.

2021 Convention Recap – GOP delegates picked a great ticket, but will Chase ruin it for them and House of Delegate candidates? was last modified: May 13th, 2021 by Guest Contributor Ken Reid

[…] the RPV was so afraid of “Trump in Heels” Amanda Chase being our gubernatorial nominee that it chose a convention vs a state primary to stop her.  That unassembled convention, while messy and divisive to establish, turned out to be a […]