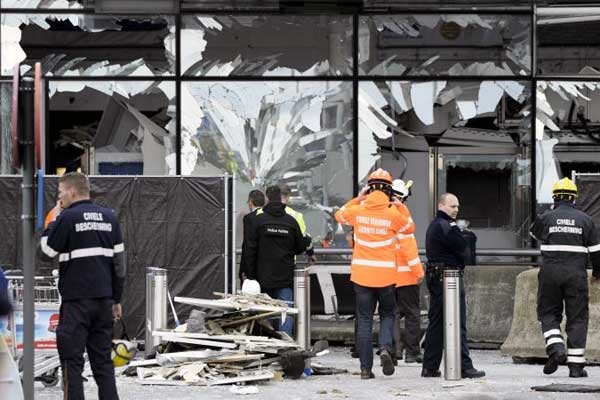 Brussels and Beyond; What’s Hard to Understand?

If you knew that a gang was moving house to house in your neighborhood, some of whom where actually criminals engaged in murder, rape and looting as they went, what do you do? Would you unlock your front door and put out a sign inviting them in, trusting that they wouldn’t do to your family what they were doing to others?

But, isn’t that exactly what has been going on for decades as tens of millions of Muslims and other third world migrants that have flooded into Western Europe and the United States?

We have been assured – some might say indoctrinated – over the years by the politicians of all stripes both in Europe and the U.S., the media, entertainment and educational complex, the vast “administrative states,” and many of our friends in the professional refugee business, that multiculturalism – and the implementation of open border immigration policies that make it possible – is in and of itself something very noble (even though we never see the adoption of those policies in the rest of the world, such as Asia, the Middle East, Mexico, Central, or South America).

The defenders of this dichotomy, suggest that opening our borders to both Muslims and the third world is a form of penitence for the crime of Western cultural and economic success, while claiming, over and over again, that the “vast majority” of these newcomers are both peaceful and productive additions to Western culture.

The attacks in Brussels – merely the latest in a very, very long and bloody list of terror attacks – reminds us that the first assertion is a failed theory conjured up behind the safe granite walls in the capitals of the West; and the price of its error is borne by the innocent.

While most Muslim immigrants to the West may be peaceful, sizable minorities of up to 30% in the West (and larger percentages around the world), are openly sympathetic to violence to advance Islam, according to numerous polls, and outright majorities around the world favor the implementation of oppressive, anti-freedom sharia law in their adopted countries.

One can only conclude that their assimilation into the cultures in which they have willingly moved has been piecemeal and painful with no signs of improvement.

These are the excruciatingly hard truths that very few political and cultural leaders in either the U.S. or Europe want to face.

In addition, the radical restructuring of immigration laws in the U.S. – specifically – in the past decades has detached immigrants from the responsibility of coming to the U.S. to assimilate into American culture; and the previous requirements of financial self-reliance or family support have been eliminated.

Unlike generations past, both legal and illegal immigrants to the U.S. have at least some access to a wide menu of public assistance, including healthcare. Currently, over half of the first generation immigrant families use some form of welfare, and in second generation households the number only falls to slightly less than half, at 48%.

Open, uncontrolled immigration has become the perfect storm. On the one hand we have large populations of immigrants, including some who want – demand in some cases – to change our culture to accommodate the cultures they have left; on the other hand, we have a massive influx of semi-literate and unskilled immigrants who have collapsed salaries and driven native born Americans (mostly minorities) out of low-skilled industries, while greatly inflating both state and federal welfare budgets.

In spite of this, Senator Jeff Sessions, R-AL, reports that new legal immigration will add the equivalent of one new Los Angeles every three years.

Europe may have already passed the point where it can no longer control its own destiny; their fate may be sealed.

But in the United States, we have unique responsibilities. We carry the world’s only Constitution founded on the principle of individual and corporate liberty. We have rights as citizens that supersede the power of the government we establish.

But, with that liberty and those rights, comes a duty for vigilance.

The core rights of a free people – freedom of religion, speech, assembly, travel and commerce – are all under a brutal assault. The attack is being directed by those who would strip the Constitution and our heritage, melding the U.S. into the Old World order of government by might; of rights dispensed at the whim of an earthly king.

Massive, uncontrolled and indiscriminate immigration is one of the blunt instruments of choice for the radical left, and their enablers on the right, including a Congress elected in 2010 and 2014 in large part to change the immigration paradigm.

In this election cycle, the issue of illegal immigration has at least been pushed towards the front of the discussion. But a real, robust debate on the actual “goal” of ever increasing, uncontrolled immigration without assimilation or civic responsibility is needed.

The question for every politician is obvious: How do we as citizens, insure ourselves that those invited into the American family become assimilated and responsible citizens who cherish our values and preserve the “shining city on a hill?” Has the time come for a moratorium on all immigration until we can control our borders and insure assimilation and self-reliance?

No politician of any party should be allowed to skirt this discussion – or our fate may slip from our control as well.

Brussels and Beyond; What’s Hard to Understand? was last modified: March 31st, 2016 by Michael Giere

China for the Chinese, Africa for the Africans, Japan for the Japanese, Mexico for the Mexicans, India for the Indians…Europe and America, for everyone.
I’m reading a novel written in 1973 called “The Camp Of The Saints” by Jean Raspail. It deals with an allowed invasion of Third Worlders to France.
This book is considered a classic in certain circles; I think it’s prophetic.

Here’s some news for all you Trump haters… Go ahead blow him away… and right now Obama is in the midst of another immigration surge… Between a new catch and release program, a de facto executive amnesty that is still going on (Obama is closing immigration cases by the thousands) and more and more refugee resettlement programs:

Your stupid GOP is done.

Well done, Mr. Giere, you write exceptionally well. Islam presents a unique problem set for some of the reasons you already cited. Here are some more. First of all, most Moslems in many countries believe the Koranic directive to kill apostates. Too many Moslems think that those who leave the faith should be killed. That ain’t American. It ain’t Western. And it certainly ain’t humane. Second, according to the Koran,. a Moslem man can marry a non-Moslem woman, but a Moslem woman is forbidden from marrying a non-Moslem man. That ain’t kosher and it smacks of Jim Crow white supremacy which allowed white men to have dalliances with black women but lynched black men for even daring to get friendly with white women. I know many – if not most – Moslems don’t strictly adhere to the Koran, but too many of them do.
But let us also be mindful that we are at fault too, as a society. How can we blame immigrants for not assimilating when we don’t even bother to educate our own school children about our own culture and civilization?

mark… you voted for Rubio… the absolute most vile POS, lying scumbag on immigration. You lost your right to say anything about immigration other than we need more of it!