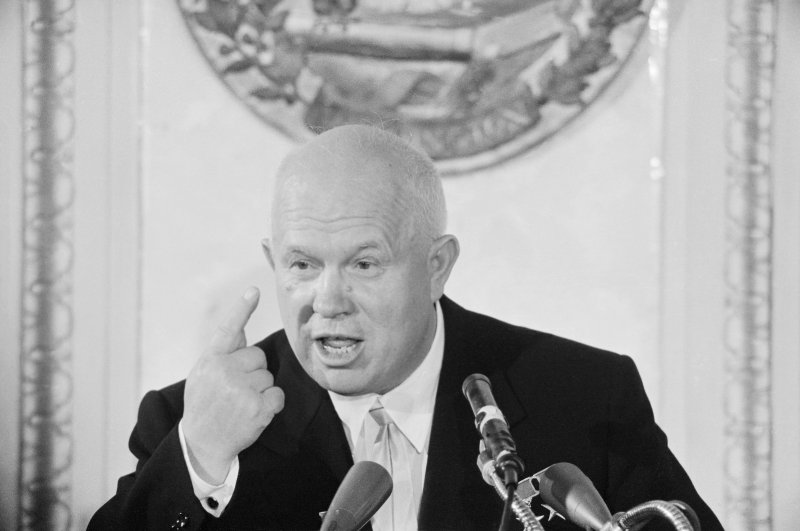 I don’t put much value in polls. They can be often skewed by the composition of those polled and the honesty with which they answer questions, however, I paid attention to a Gallup poll which claimed that 4 in 10 Americans want socialism, the precursor to communism. If this poll is correct, then Khrushchev’s “conquest without war” would have come to pass decades after his death.

Those asked about their views on socialism, generally have no ability to explain it, or why they desire it; they just think it’s a good idea and they want “free stuff.” Such advocates of socialism have never opened a history book on socialism, nor have they studied the basic Principles of Economics.

They hate capitalism while enjoying the freedom to say so without fear of being sent to a gulag, and owning goods produced by the very capitalism they loathe. To say that they are uninformed fools and tools of the few who are designing the one-party state (Democrat Socialist), is an understatement.

None of the advocates of socialism understand that the European socialist welfare they admire, is supported by high taxes and strong capitalist corporations with shareholders and investors, who pay taxes to the state in order to support such lavish welfare.

In 1903 Lenin founded what was to become eventually the Communist Party with a group of “close knit dedicated professional revolutionaries” who would blindly follow without question the decisions of the leaders. It is important to focus on the word professional, indicating people who were well-trained in political activism, community organizing, and manipulation of the masses. Their goal was to establish “the one-party state” better known as the Party.

The Party allowed “democratic centralism,” meaning that discussion was permitted within certain parameters, until a decision was reached. Once the decision was “adopted,” all minions had to follow it faithfully. The Party was illegal as they were aiming to overthrow the Czarist regime, an act which eventually came to pass.

Membership was limited to those who wished to join. “Only workers, peasants, and intelligentsia who are enlightened, active, and devoted to communism are admitted.” They had to understand communism and be “its active soldiers,” supporting its ideas as Karl Marx had envisioned.
One representative (deputy) per 300,000 Russians was chosen to be in the Soviet of the Union, one of the two houses of the Supreme Soviet. These representatives were nominated by the Party, trade unions, cooperatives, youth and cultural organizations, all under the boot of the Party’s control. An electoral commission could reject any candidate without giving a reason. The unopposed candidates always received 99 percent of the votes.

In the long line of communist leaders of the Soviet Union, Nikita Khrushchev is less known today than Stalin, his contemporary who is responsible for the death of millions. I’m not sure how many victims Khrushchev left behind during his tenure as supreme leader.
During Khrushchev’s formative years, the socialist propaganda was intended for the working class, quite a “minority in overwhelmingly rural Russia.”

The socialist propaganda in today’s America is aimed at affluent college indoctrinated Millennials who decry their “whiteness and white privilege” which happened at the expense of other races. How that suddenly occurred in the 21st century in one of the most tolerant and law-abiding countries in the world where discrimination of any sort is punishable by law, is unclear and irrational.

The “Party schools” in the Soviet Union were indoctrination centers for the Communist Party membership. It was a privilege to be admitted to such schools, not the phony variety “white privilege” Democrat Socialists in America suddenly claim. Soviet privilege consisted of living in substandard conditions in crowded, unheated dormitories with little food, setting the standard for future modest living conditions under communist dictatorships around the world.

The curricula were composed of interminable meetings during which daily life was deconstructed into Marxist terms and the students’ behavior and attitude toward the “class struggle” was carefully monitored and dissected. They were taught how to better control “the lives of others” through carefully scripted guidelines of mental and physical oppression, depriving the population at large of any choice and of their freedom.

After the Russian Revolution of 1917 and Lenin’s death in 1924, a contagion spread across Europe – Russian communists stirred upheavals in Germany, and in other capitalist nations.

The Soviet leadership offered a new brand of “socialism for a new class.” Stalin launched the slogan “socialism in one country,” a socialism that would not turn out to be the promised egalitarian society, but a society in which the Communist Party members would be the sole beneficiaries.
Subservient communist functionaries became the apparatchiki, the bulldozing machine of control through fear, snitching on neighbors and relatives, jail, repressions, and purges. Even the Marxist Trotsky was beaten and exiled as a “left winger,” and the “right wingers” were labeled “petty bourgeois” by Stalinists.

Apparatchiki forced peasants to give up their land, equipment, and animals into collective farms (kolkhozes). If apparatchiki wavered, they were swiftly eliminated as “untrustworthy elements.”

Apparatchiki also watched one another. “Socialist vigilance required the uncovering of deviations and deviationists, the unmasking of the class enemy who might have wormed his way into the Party.”

When the Ukrainian peasants were not delivering enough grain in 1927 and 1928 to feed the urban population, Stalin sent the Party apparatchiki and the secret police on a requisition drive, “liquidating” with machine guns the “kulaks,” peasants they saw as enemies because they were “unwilling to satisfy the demands of the Party agitators.” Peasants resisting collectivization were not just attacked as “kulaks” but as “enemies of the people.”

Stalin “decreed the liquidation of the kulaks as a class,” and peasants, who could hire workers and owned their farms and agricultural equipment, existed no more.

After “squashing the enemy” of the Party, the “socialist construction” expanded by building up Stalin’s “cult of personality.” The purges that followed eliminated people and confiscated their property which was later distributed to loyal party members for their personal use. The Communist Party was infallible, so scapegoats were found for every failure of the system.

When Stalin died in 1953, a period of “de-Stalinization” began. Khrushchev promised a “great leap forward” for his proletariat who would outproduce the U.S. in per capita meat, milk, and butter and “to make Soviet toilers wealthier than the capitalist slaves.”
Not at any time did the Soviet proletariat live better or wealthier than the “capitalist slaves.” To this day, the Russian overall standard of living is lower than the American standard of living even though the cost of living in Russia is cheaper. The average monthly disposable salary is five times higher in the U.S. https://www.nationmaster.com/country-info/compare/Russia/United-States/Cost-of-living

By the end of the 1960s Khrushchev “stopped the terror of the secret police, emptied the concentration camps, gave his people enough to eat, new apartment housing, and promised détente and peace.”  He even wore a very bourgeois sable-lined winter coat. (Conquest Without War, pp. 39-41)

In his lifetime, Khrushchev failed “to see the communist flag fly all over the whole world” as he so zealously desired, but progress is made in the 21st century U.S.A. through domestic communist activists, anti-American politicians, and the MSM.

Communism, conceived as a world philosophy and a world movement, “Proletarians of all lands, unite” (The Communist Manifesto), declaring that social class, not nationality, not race, is the important link between humans, has killed 100 million innocents in its quest to conquer the whole world.

Krushchev believed in the “inevitable triumph” of socialism because, he said, “Capitalism is a worn-out old mare while socialism is new, young, and full of teeming energy.”

If the Soviet version of world-wide socialism were to triumph, it logically follows that large countries like Russia, China, or both, with plenty of experience in socialism, would become the world power.

I should also mention that Lenin taught followers in his lifetime that war was inevitable if “imperialism” existed.

An interesting question begs asking, if the socialist proletariat, prompted by the elites of the Communist Party, does conquer the whole world, what are they going to do with it?