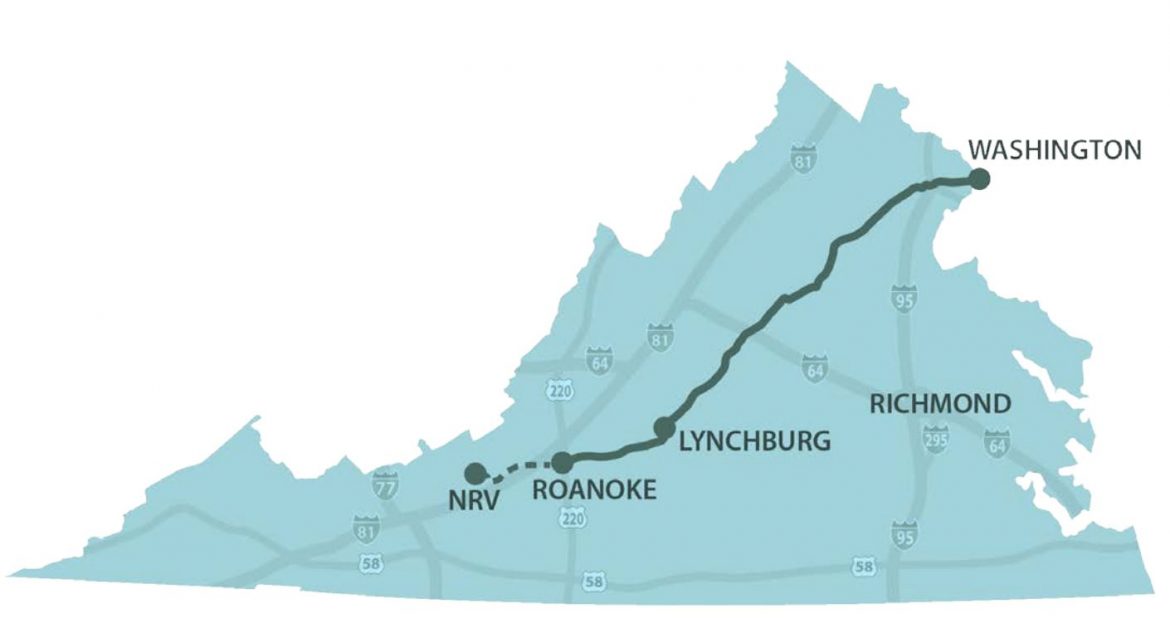 In his proposed budget unveiled yesterday, Governor Ralph Northam provides $50 million to extend Amtrak passenger rail service from Roanoke to the New River Valley. The money would go to “right-of-way and easement acquisitions and anything that would help reduce bottlenecks to make way for a passenger train in the New River Valley,” reports the Roanoke Times.

“This is an important down payment on extending passenger rail connections in Southwest Virginia,” Northam said. But it’s not a done deal yet, says the Times. There is no firm timeline for when the state and Norfolk Southern Corp. will strike an agreement.

Fifty million dollars is a non-insubstantial sum. As Northam acknowledges, it is only a “down payment.” It does not cover, for instance, the cost of building an Amtrak station in Christiansburg. Some documentation exists online about projected ridership, revenue, and costs available, but I could not find a study that weighed the costs and benefits of the proposed route compared to alternative investments of the money.

Let’s review the numbers, such as we have them.

One reason for optimism is that Amtrak service to Christiansburg would be an extension to an already-profitable rail service to Lynchburg and Roanoke, which is one of the strongest performing state-supported train routes on the Amtrak system. A single daily train carried more than 223,000 passengers in 2019, and the route saw a 14% year-to-year gain in the first two months of 2020 before the COVID pandemic threw all numbers off. In a passenger railroad rarity, Roanoke train revenues actually have exceeded operating costs.

An indicator of potential demand for inter-city rail service is that the Virginia Breeze bus line linking Blacksburg and Washington, D.C., carried nearly 29,000 riders in 2019.

The New River Valley, with a population of 180,000, has the fastest-growing region west of Richmond. The 40,000 students attending Virginia Tech and Radford are expected to be a core market for passenger rail. Forecasts suggest that a daily train service out of the New River Valley, routed through Roanoke, Lynchburg, and Charlottesville to Washington, would attract 16,000 to 20,000 riders a year, according to the Times.

That’s all well and good, but it does not tell us whether $50 million is a good investment of state funds. An economist always asks, what are the alternative opportunity costs — how else could the money be spent? A couple of questions.

I’m not saying that investing $50 million in extending public rail service to the New River Valley is a bad idea. The service to Lynchburg and Roanoke has worked out pretty well, and this might, too. But one can’t judge the value of a public infrastructure investment in isolation. It must be compared to alternative uses of the money. If such an analysis has been performed, I would like to see it. So should anyone who cares about the stewardship of public dollars.