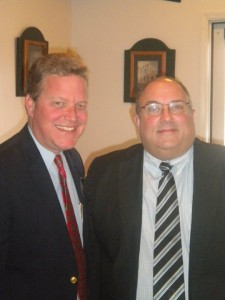 Senator Bill Stanley and Mark Lloyd have shown Virginia how it is done the past four years. The two men have known each other before either one were involved in politics. They chose different paths in politics, but those paths quickly converged. Senator Stanley started off as a local GOP Chairman and then served as 5th District Chairman. Mark Lloyd has been involved in the Campbell County GOP since the 90s, but his public profile came as president of Lynchburg Tea Party and then later as Chairman of the Virginia Tea Party Patriot Federation. Both men worked together and showed that it was possible to build a broad conservative coalition for victories in the 5th District. All that changed on Saturday.

In 2010 Congressman Hurt found himself in a heated 7-way primary. He was the least favorite of the tea party crowd, but with six other tea party candidates splitting the vote Congressman Hurt won the primary with 48% of the vote. The Lynchburg Tea Party chose to not endorse, but that didn’t stop Mark Lloyd from personally getting involved. He rolled up his sleeves, recruited a large team of volunteers and worked hard for Congressman Hurt, who won the general election with only 50% of the vote.

Mark Lloyd’s abilities were quickly recognized by others and they hired him to independently help Senator Garrett’s victorious state senate election. Mark went on to work in many campaigns, continuing to show his prowess at building a successful grassroots ground game.

Senator Stanley and Mark Lloyd produced what many others have been unsuccessful at accomplishing – a cohesive and united team of Republicans and Tea Party supporters working together in the 5th District and winning! In fact, Campbell County (Mark Lloyd’s county) had the highest voter margin percentage for Congressman Hurt, beating even Hurt’s home county of Pittsylvania! 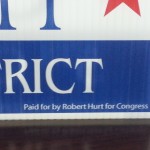 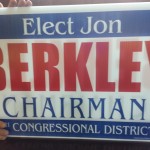 Fast forward to this past Saturday. The  strategy and behavior of Hurt in the 5th District Chairman race is baffling to hundreds. Hurt spent tens of thousands of dollars paying for Berkley signs, busing in delegates, making calls, and mailing literature. But the bulk of that money paid his consultant to dismantle the unity in the 5th district, beat down Mark Lloyd, and publicly humiliate his own 5th district state central members.  This bizarre move may have helped Eric Cantor and Ray Allen in their quest to control RPV, but Hurt had to pay a significant public relations price to meet their demands.

Congressman Hurt attempted to distance himself from the Campbell slating, but the connections are too obvious and his actions this past Saturday only reiterated his true intent. Hurt’s consultant (Chris LaCivita), Mike Thomas, Ray Allen and Eric Cantor have all been close political allies for more than 20 years and Mike Thomas was one of the key individuals responsible for slating in Campbell county, with the help of Democrats.

On Saturday, Hurt was asked if he would make a motion to seat all the delegates from Campbell County,  after all, Campbell County had supported him more strongly than even his own home county. But Hurt flatly refused. Further, when the motion was made to seat NO delegates from Campbell County, Robert Hurt stood up to support the measure rather than remain neutral. Hurt had a number of individuals who saw him stand and they went over to plead with him. It was a sad sight to watch. A confused lady sadly pleaded, “But we knocked on doors for you! We made phone calls for you! We believed in you! Why won’t you seat us?”

Hurt’s response was dismissive, “I understand that and I thank you, but I just think we ought to do what the 5th District Committee recommended, which was to seat nobody.” I told Hurt that the 5th District committee had recommended that ALL delegates be seated when they ruled that the slating in Campbell had been illegal, and that, in fact, Senator Stanley had sent an email to the credentialing committee mandating that all Campbell County delegates be seated according to the RPV General Counsel ruling.

Hurt stated emphatically that he did not agree with the General Counsel ruling – as if that was his determination to make. He also asked me, “Is slating illegal, Jamie? IS IT ILLEGAL?” My response was that it is legal according to Robert’s Rules as long as it is executed properly, but the 5th District Committee had ruled it was illegal implemented in Campbell County.

Hurt’s complete lack of sympathy and refusal to seat the delegates caused hundreds of delegates in and outside of Campbell to leave the convention saying, “I won’t lift a finger for Hurt ever again!” It was shocking that Hurt showed very little regard for  hundreds of his own volunteer activists.

Amazingly Hurt continued with his scorched earth tactics. He punished those who opposed his nominee (Jon Berkley) by engineering a vote to revoke the voting privileges on the 5th District Committee of the five state central committee members  (more to come on that in a later post) who had worked hard for Mark Lloyd. 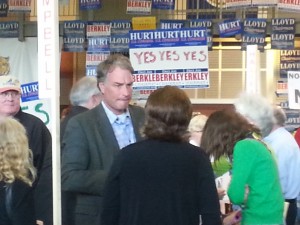 Congressman Hurt destroyed four years of relative unity and harmony that few other congressional districts have been able to attain. It is still puzzling to understand why Hurt chose to start this civil war, when he was one of the lucky few that had Republicans and tea party members working together in elections. It is sad that he has allowed himself to become a tool of high-paid consultants and Eric Cantor. Unfortunately, in one Saturday Hurt dismantled what Senator Bill Stanley and Mark Lloyd spent the last four years building within the Republican Party and Tea Party of the 5th District—unity for victory. It is clear that the only one who really got hurt on Saturday was Hurt. As Mark Lloyd said in his speech, you don’t win with subtraction and division. Hurt may have to learn that lesson the hard way.