On a rainy Saturday morning over 2,000 Republican delegates arrived at the JMU Convocation Center in Harrisonburg, VA and proceeded to flip the script on a campaign narrative of chaos and contention. Allegations of a rigged convention gave way to the reality of a fair, organized, and professionally run process with a unanimously adopted rules of order.  Claims of mass challenges of delegates were wiped away by a unanimous report of a credentials committee that seated nearly everyone that arrived to vote, including over 120 people who claimed they filled out delegate pre-file applications that were never turned in to the unit committees, so they were never approved at a mass meeting.

Conventional wisdom about this convention was also turned on its head when it came to balloting.  Most people believed that, with the campaign to replace Bob Goodlatte morphed into an “anybody but Cynthia” dynamic, the Dunbar campaign’s only shot was to win on the first ballot, yet it was the Cline campaign pulling out all the stops to ensure a single ballot victory by engineering the withdrawal of Chaz Haywood before the first round of voting began.

How big was Haywood dropping out? A lot bigger than some might have you believe. Out of a registered 4200 delegates, about 50% of them actually showed up to vote.  Estimates based on polling and voter contacts from the Dunbar campaign put Haywood’s initial signed up delegates at somewhere between 500 – 600 delegates.  If you assume a 50% drop in delegates from those signed up to those that showed up (as occurred for the convention overall) you could estimate anywhere from 250 -300 delegates in Harrisonburg ready to vote for Chaz. Compare that number to the raw vote totals for the first round: 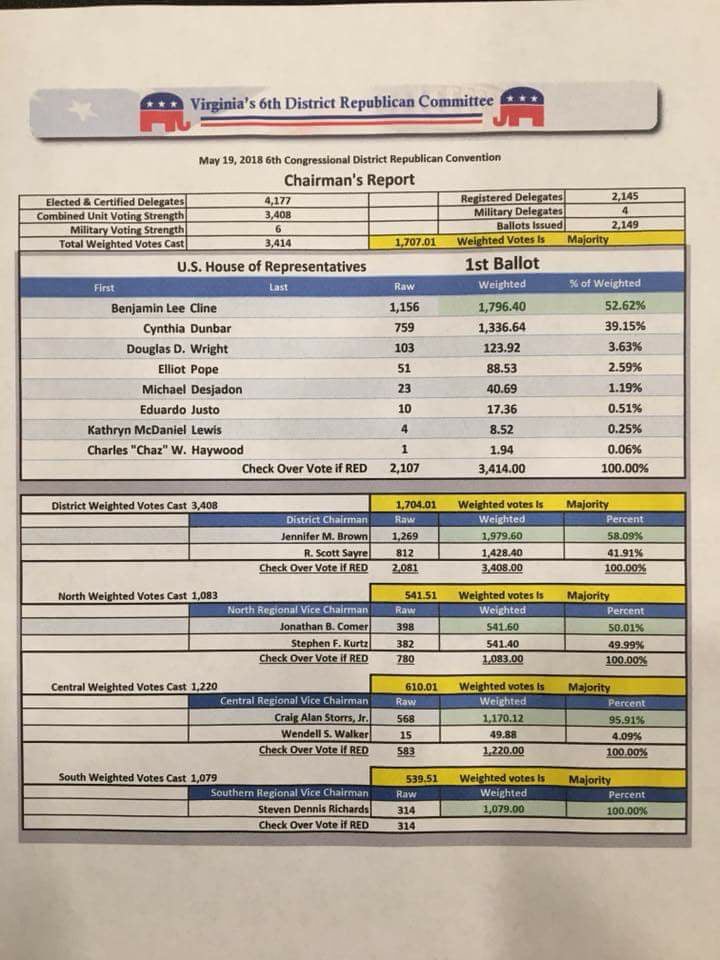 At just over 100 votes, Douglas Wright pulls 3.6% of the vote.  If Chaz had as many as 250 delegates present, and he threw all his support to Ben Cline, then it is fair to say that Haywood’s presence on the ballot could have reduced Cline’s vote totals by anywhere from 6 to 8%, pulling him below 50% and forcing a second round of balloting.

Would a second round of balloting produced a different result?  Quite possibly.  After the vote for temporary Chairman, there was quite a bit of confidence running through the Cline supporters at the convention.  With Jack Wilson getting over 60% of the vote, many felt a Cline victory was a foregone conclusion.  Then there were numerous delays in the process that delayed the first round of balloting longer than usual.  There was a three hour gap from the election of the temporary chairman to when the first round of balloting begins.  With the delay in activity, combined with a growing confidence in victory, many pro-Cline delegates began to leave the convention as soon as they had cast their ballot in the first round.  By the time the speeches by our Senate candidates were completed, a quick look at the convention hall revealed large swaths of empty stands where the pro-Cline Rockingham and Roanoke delegations had been, while the pro-Dunbar areas still looked nearly full.

While there was some excitement about the Congressional ballot, the vote for temporary Chairman made the vote for 6th District Chairman rather anti-climactic.  Jennifer Brown won easily with 58% of the vote, but soon may feel that she has won the battle but lost the war. It was reported that two last minute FEC complaints were filed before the convention.  One of them is focused on the 6th District Committee and it’s campaign finance reports.  While intended to be used against Scott Sayre, the fallout of this complaint will actually land on the 6th District and its new Chairman, Jennifer Brown.

The second complaint is actually much worse. It seeks to have Sayre Enterprises put under review by the Inspector General’s of the GSA and the Defense Department, to have its Federal contracts revoked, and be barred from bidding on new ones. This would most likely result in Sayre Enterprises going out of business and all of its employees on the unemployment line. What was the crime committed by Mr. Sayre to deserve this potential punishment?  He allowed the 6th District Committee to meet in one of his conference rooms for free.

Whether these complaints were actually filed or whether they were just last minute stunts is yet to be determined.  For the sake of the 6th District let us hope that they were never filed, or if they were that they are able to be withdrawn, especially since Mr. Sayre could most likely remedy the threat to his company by submitting a large bill to the 6th District Committee for unpaid rent, and the committee would have that much less money to help Ben Cline’s election efforts.

Both the Cline and the Dunbar campaigns deserve congratulations.  The Cline team was able to deliver a big win in a hard fought primary battle.  The Dunbar campaign was strong enough that a first time National Committeewoman was considered a real threat to defeat a 16 year incumbent Delegate. After the results were announced Cynthia Dunbar made the first move towards trying to bring the party back together by moving to nominate Ben Cline by acclamation.