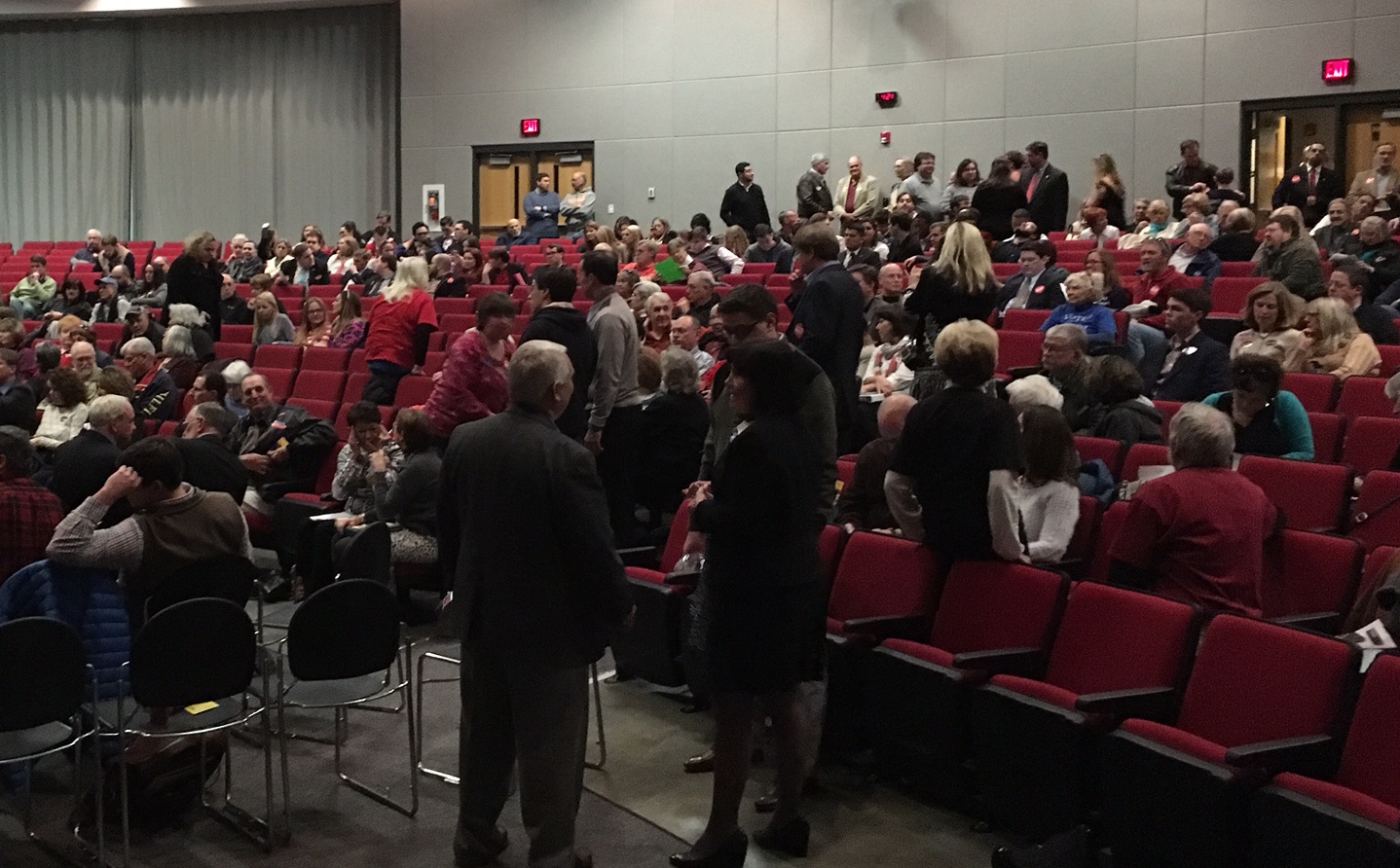 In what would have been inconceivable at any time in recent memory, Virginia’s 7th District Republican Committee voted to nominate the district’s GOP candidate for the U.S. House of Representatives via a party run convention instead of a primary. The committee met in Goochland on Saturday, and scheduled the convention for May.

The committee is composed primarily of local GOP chairmen in the district. Also in attendance were hundreds of supporters of Rep. Dave Brat who had come to cheer on the popular freshman congressman, and a contingent 30 to 40 College Republicans, who had just wrapped up their annual convention in nearby Richmond. (Congrats to new College Republican Federation of Virginia Chairman Benjamin Dessart!)

For those not familiar with congressional district committee functions within the Virginia GOP, such meetings are usually attended by no more than a handful of members of the public. The interest in this particular meeting, however, was significantly elevated by the efforts of a faction in the district still upset at Eric Cantor’s having lost the 2014 primary to Brat. That faction had aimed to have a primary (either party-run or state-run) to choose the district’s nominee, in the hopes of attracting so-called “establishment” money in their effort to oust Brat and his conservative allies in the party.

Brat himself was on hand to make clear his preference for a convention. Arriving to sustained applause and cheering from the crowd, Brat delivered an impassioned speech about how, given the uncertainty surrounding Congressional redistricting and how it is possible that a final nominee might not be determined until late summer after the courts settle on the final district lines, only a convention would put the eventual nominee in a place necessary to secure victory. 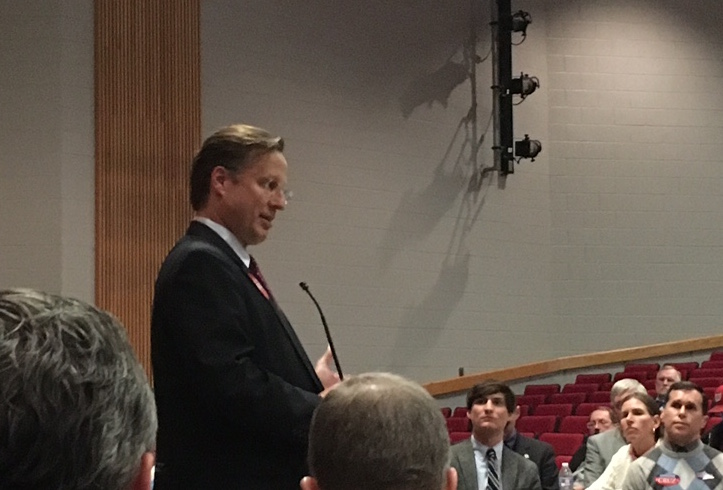 Rep. Dave Brat addresses members of the public and the 7th District GOP Committee on Saturday in Goochland

The committee’s choice of a convention is largely a function of vacancies in two State Central Committee seats from the 7th created by imposition of new Congressional district lines in the recent action by a federal district court. The two seats on the committee held by people who suddenly found themselves living in a different district had to be filled by the committee yesterday.

When the time came for a vote, the pro-Brat and pro-primary sides were evenly split. A motion by Chesterfield GOP Chairman Donald Williams to vote on the vacancies using a secret ballot failed on an 8-to-8 tie, as did a subsequent vote on a motion by Spotsylvania GOP Chairman David Ross to conduct the election via roll call vote. Consequently, the vote was done with a show of hands, and longtime stalwart conservative activist Nancy Smith was elected. Smith’s vote added to the narrow pro-Brat majority that then elected Tea Party workhorse Mark Hile to the final vacant position.

With a solid majority in the pro-Brat camp, the committee then proceeded to vote on the method of nomination. Seeing the writing on the wall, most of the folks who would have preferred a primary ended up joining in a show of unity by voting for the convention preferred by Brat, which passed with a nearly unanimous vote.

Although the Brat-friendly crowd cheered wildly at the results, enthusiasm on this topic must be tempered by the knowledge that this outcome may be fleeting. The U.S. Supreme Court is likely to rule any day now on the GOP Congressional delegation’s request for a stay of the lower court’s order giving immediate effect to the new district lines until at least such time as the high court has a chance to rule on their appeal on the merits of underlying case.

Should the Supreme Court grant a stay (which seems more likely than not at this point), that would probably mean immediately reverting to the old lines for this year’s intra-party and Congressional nomination processes. Under the old lines, the committee was composed of a majority who favored a primary. This is why, to the confusion of some in the crowd, Donald Williams gave notice at the end of the meeting of his intention to bring the method of nomination back before the committee at its next meeting, a smart parliamentary safeguard against any moves by the pro-Brat chairman, Fred Gruber, to rule such a motion out of order.

For the moment, though, congratulations to Rep. Brat, Fred Gruber, Ben Slone, Nancy Smith, Mark (and Anita) Hile, and the entire team for a job well done!

Full Disclosure: At the request of chairman Gruber, I served as parliamentarian during Saturday’s meeting.

Now that the SCOTUS has denied the stay, could you update the article, or comment here on the ramifications?

Thank you Steve for keeping that mess of a meeting in order, anything on the mandatory v. voluntary fees??????/

totally disagree…he is doing the job we sent him to do. In order to do that he needs to win…Cantor couldn’t have cared less what we wanted/needed much less what was good for the country. His district encompasses many counties…not just one so what would be the point of “controlling the county”???

Donald Williams is a smart man. I could not stomach Cantor, but it only took Brat one term to become as arrogant as Cantor.
If Brat is SOOOOOOO popular, he should not be afraid of a primary. And if they have a convention, a Brat win is not automatic.
Hopefully, the map will keep me OUT of the 7th.

I cannot imagine the word arrogant and Brat in the same sentence. Brat will continue to win as long as he keeps doing the things he promised his district he would. I would call him confident …hardly arrogant. I have met him many times and find him intelligent, funny, self deprecating and very easy to talk to…have you actually met the man???

We need many, many more Dave Brats at all legislative levels of our Republic

One can but hope that the at-large committee members will remember that they should be representing their respective units’ membership, not the cabal that seems determined to exact revenge for Cantor and to split the district.

Gosh, that’s a bit of a mess that a supreme court decision can change your committee’s makeup. Couldn’t a clause be added that the residency requirement is only at the time of election, or each Jan 1st, or something like that?

And a big thanks to you, Steve, for your straight-forward parliamentarian oversight that kept the meeting on track. Echo congrats to Dave, Nancy, Mark, Fred and Ben,

I wish I could attend that convention, but things are pretty dull here in the 1st District. The only exciting thing that happens is when Eric Herr posts pictures of his dog, Quincy, on Facebook.

Sad news that this issue may not be settled and that the GOPe wing of the 7th district (Cantor’s losers) may yet impose a primary. They must be reminded however that we’ll never go back to the arrogant, out of touch, big spending, amnesty loving ways of our former congressman. We have real representation now and not a U.S. Chamber of Commerce toady.

While much progress has been made – much work remains.

The Tea Party is meant to represent a populist movement. It’s a sad and telling sign that these leaders have chosen to impose a party-controlled convention rather than embrace an open, competitive primary. What would have been the response had Cantor used this maneuver to thwart Dave Brat’s challenge? We should have opposed such a blatant attempt to shield an incumbent from public scrutiny. I believe most here would have.

Candidates should be given the opportunity to present their visions to the public, and the voters â€“ not party insiders and operatives â€“ should decide. This year’s presidential election shows more clearly than ever that this is the proper way to confront and overturn establishment complacency.

Excellent choice, and indeed a rare sight to have so many observers at a congressional district committee meeting.