8 Reasons to Vote Against Corey Stewart

Elections should not be about voting against anyone, and Virginia Republicans are lucky to have a candidate for Governor in Ed Gillespie that they can cast a proud vote for.

That being said, after the vitriolic, lie-riddled, and downright petty campaign waged by Prince William County Board of Supervisors Chairman Corey Stewart, he deserved one more post. This is the penultimate list of reasons to vote against Corey Stewart.

Corey Stewart thinks Virginia voters are stupid. He is currently running ads on social media touting his stint as Donald Trump’s campaign chairman for the state. Ads like this: 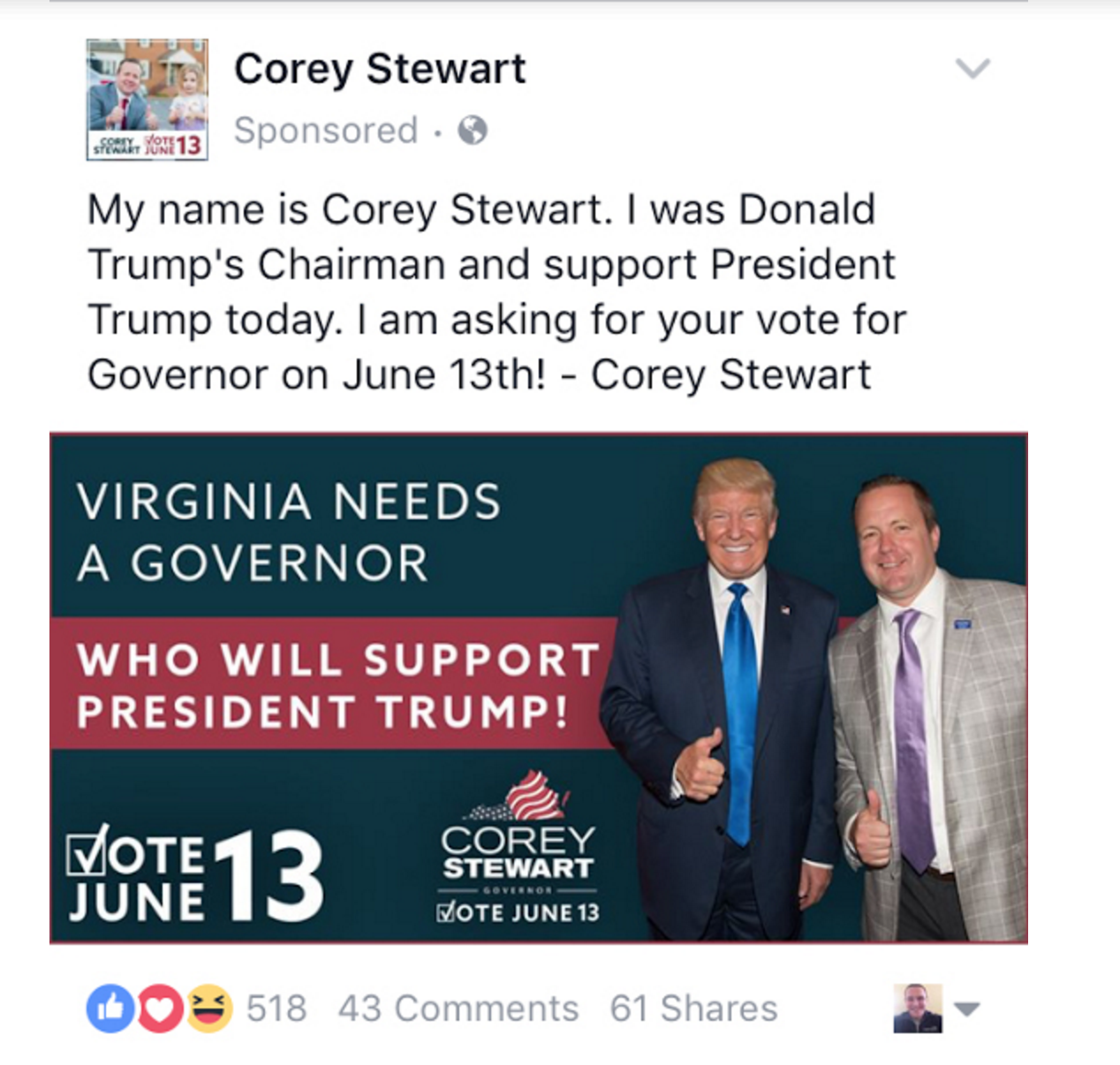 While the ad is technically true, it’s misleading. Stewart was Trump’s chairman in Virginia until he was fired for prioritizing his own gubernatorial campaign and staging a publicity stunt protest against the man who is now Trump’s Chief of Staff.

Corey was tone deaf to that the entire time but he was solely focused on running for Governor. And I implore every Trump voter out there to listen to us when we say we love Donald Trump, we worked for Donald Trump. Do not vote for Corey Stewart just because you think that he’s the heir apparent to Donald Trump.

Stewart is now touting an undefined plan to cut taxes in the Commonwealth, but you shouldn’t trust him. Stewart raised taxes in Prince William County.

In fact, after hiking taxes by 4.5% in 2014, one of the Democrats on the board in Prince William County even joked that Corey was looking like a Democrat:

Frank J. Principi (D-Woodbridge) was the only supervisor at Tuesday night’s final budget discussion to advocate for a higher tax rate, calling on supervisors to pick the highest rate that they could, the advertised tax rate of $1.158. He eventually voted for Stewart’s proposal and told Stewart, “You’re looking more and more like a Democrat every day,” which Stewart jokingly said he did not appreciate.

Stewart is again claiming that he has kept taxes low in Prince William County, which is an absolute falsehood.

3. Corey Stewart Did Trump No Favors in Prince William

Not to keep beating the Trump campaign chairman drum, but Stewart did the President and his campaign no favors in Prince William County. Regardless of where you stand on Trump, this speaks to Corey’s efforts.

Donald Trump lost Prince William County in the Republican primary to Marco Rubio. This is despite Stewart having been Trump’s chairman at the time.

How do you think Trump fared in the suburban county in the general election?

Mitt Romney ran 4 points better than Donald Trump in Prince William County. To make matters worse, despite Corey’s “support”, Donald Trump is the only Republican candidate in recent history to lose every single magisterial district in the county.

I’m going to make this one short and to the point. Corey Stewart used the loaded sexual and racial term “cuckservative” to describe another Republican, and Virginians can do better than that. This is language that even the most anti-politically correct people on our side wouldn’t touch with a ten foot pole.

5. Corey Stewart is a Loser

Corey Stewart has decided to attack Ed Gillespie for being a “loser”, because Ed came within a breath of defeating the most popular elected official in the state, Mark Warner, in his race for U.S. Senate.

I suspect Corey Stewart is jealous that Gillespie even had a chance to appear on the general election ballot, as Stewart is already a statewide loser.

In 2013, Stewart attempted to become the Republican nominee for Lieutenant Governor. After running a mostly negative campaign which included a number of dark money mail pieces attacking each of his opponents, Stewart was absolutely crushed. In the nominating convention, Stewart finished third, never receiving more than 20% of the vote.

I point you to conservative anti-tax activist Bill Petrak, who also lives here in Prince William County and has had a front row seat to Corey’s governing. He wrote an op-ed for The Bull Elephant where he urges Republicans to vote for anyone but Corey:

As a resident of Prince William County for 13 years, I would highly recommend you DO NOT vote for Corey Stewart to represent the Republican Party for the upcoming election for the Virginia Governor. Those of us in PWC who know Corey Stewart like to joke about how we love “election year Corey.” During the year before Mr. Stewart runs for re-election, he is the most solid conservative in the Commonwealth. As soon as the election is over, Mr. Stewart runs quickly to the left and becomes a solid liberal when voting as the Chairman. His philosophy has been that we, the commoners, will forget about all his liberal indiscretions and focus on his most recent conservative achievements. In other words, he believes the electorate has a very short memory.

I highly recommend reading the entire piece. Corey Stewart campaigns as a conservative, but that’s not how he governs.

7. Stewart Wants Taxpayers on the Hook for a Lavish Ballpark

Supervisors listened, and to move ahead with a non-binding agreement that calls for the prospect of building a $35 million baseball stadium with as many as 7,000 seats for the Potomac Nationals to lease from the county for 30 years. In addition to construction costs, county taxpayers would be on the hook for up to $7 million in site work to prepare the stadium site and cover the cost of a $450,000 annual rent payment to JBG Companies, the owners of the Stonebridge at Potomac Town Center where the new stadium would be built.

The annual rent payment would be the most expensive in all of Minor League Baseball, said Michelle Attreed, who works in the county budget office.

While Stewart rails against big government and special interest handouts on the campaign trail, he’s giving developers a big fat gift back at home.

8. Stewart’s Own Colleagues Pick Someone Else

Shouldn’t it tell you something that Stewart’s colleagues on the Board of Supervisors in Prince William County and his own Sheriff are supporting Ed Gillespie?

A group of five Prince William County elected Republicans are lending their endorsements to GOP strategist Ed Gillespie in Virginia’s gubernatorial primary, delivering a sharp rebuke to Board of Supervisors Chairman Corey Stewart and his own bid for the governor’s mansion.

To make matters worse for Stewart, Sheriff Glendell Hill was initially backing Corey, but withdrew his support because of Corey’s divisive, negative campaign:

“He is a friend, but his campaign has become more focused on division, rather than the unifying values and the history of the Republican Party,” Hill said in a statement.

If Stewart can’t rally his own colleagues around him, how can we expect him to unify the Republican Party to win in November?

The Choice is Clear

Corey Stewart runs as an election year conservative and governs as a Northern Virginia moderate. In this election, facing longshot odds, Corey has embraced fringe rhetoric and will say anything to try to win. Voters must reject him.

Justin Higgins is a digital media consultant and Republican activist residing in Manassas, Virginia. He previously served as Deputy Director for Content on Marco Rubio's presidential campaign and as the Woodbridge Magisterial Chairman for the Prince William County Republican Party. He can be found at justinlhiggins.com/