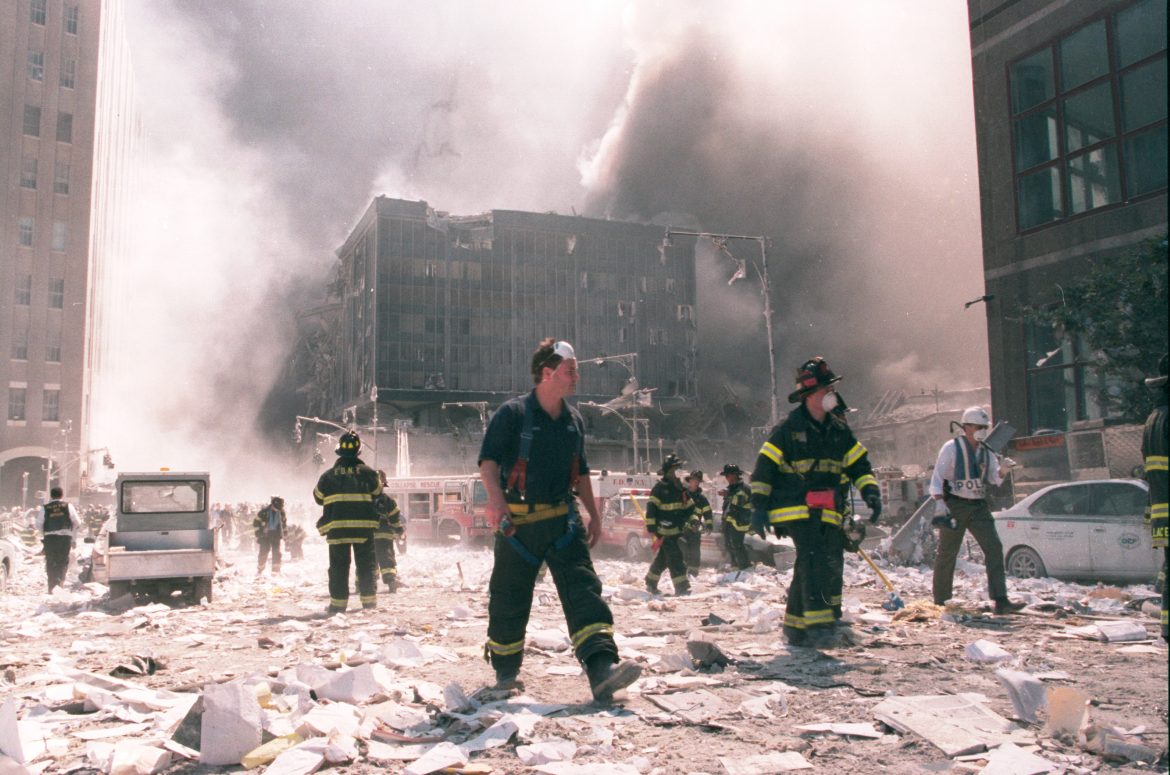 “But, war’s true nature is known only by warriors. “

The smoke twisted out of the North Tower of the World Trade Center like a foretoken from Hell, coiling into the cloudless blue sky, driving its evil reality deep into the national consciousness.

But nearly two decades on, the horror of the day seems oddly absent, even forgotten. The twenty-four-hour hate fest that now constitutes the national news media has little time for yesterday.

Workers and visitors who were between the ninety-third and ninety-ninth floors at 8:46 AM on that September morning were either killed outright or trapped by the horrendous impact, explosion, and fire as a Boeing 767, Flight 11, slammed dead center into the Tower at 465 miles per hour. Stairwells and elevators were destroyed, and a fireball of jet fuel rocketed down one elevator shaft and blew out part of the lobby. Within four minutes, several hundred dazed occupants trying to find a way out either stumbled or intentionally flung themselves through the six-story gaping wound in the North Tower to escape the inferno, falling over 900 feet to their deaths. Some were never identified.

At 9:03 AM, while thousands of stunned New Yorker’s crowded into the streets and hundreds of firefighters, emergency medical personnel, and police were still converging on the WTC complex, New York Center air traffic control was tracking a second Boeing 767 jetliner that was not responding to radio communications. The aircraft had already had two near collisions with other commercial air traffic.

The controllers watched helplessly as the 300,000-pound aircraft plunged into a steep dive, dropping over five thousand feet a minute, racing towards Manhattan at 590 miles-per-hour.

Flight 175 struck the South Tower at an angle, between the seventy-fifth and eighty-fifth floors with a fireball and cascading debris captured by over fifty different camera angles across greater New York and New Jersey. The images sear the mind still.

Outside of Washington, D.C., the FAA was tracking yet two other aircraft. On one, Flight 77, passengers were able to alert authorities that the plane had been hijacked and the pilots were both dead. Terrified air traffic controllers sent out the first alerts that the 767 was seemingly headed towards the White House. Losing the radar track on Flight 77 as it changed course, they would learn through press reports that the 767 had flown into the western facade of the Pentagon at 9:37 AM.

The last hijacked plane, Flight 93, would spiral headfirst into a field in Somerset County, Pennsylvania, only twenty minutes later. Heroic passengers on cell phones with relatives, and one speaking with a telephone operator, stated that a group of passengers was preparing to storm the cockpit in an attempt to thwart the hijackers from using the 767 as another missile.

In a grim finale to the horror of the morning, the South Tower collapsed at 9:59 AM, followed by the North Tower twenty-nine minutes later. They would continue to burn for one hundred days.

The dead counted 2,763, as best as the accounting could be, including 414 first responders in New York, plus 187 at the Pentagon, and 40 in Pennsylvania.

Of course, the attack on the WTC wasn’t the first terror attack on Americans, only the most horrific.

Some argue that the lack of serious responses to a decades-long series of terrorist attacks seems to have produced only more audacious and escalating ambitions among Islamic terrorists; Lebanon in 1983, the first WTC bombing in ’93, the ’96 bombing of the Khobar Tower in Saudi Arabia, and the attack on the USS Cole in Yemen in 2000.

Perhaps so, however, the aftermath of 9-11 has been even more devastating to the United States than all of these attacks combined.

Late in 2001, President George W. Bush led the unified nation admirably in the initial campaign against the responsible terrorist group known as al Qaeda, and their hosts who then controlled the government in Afghanistan, another radical Islamic group, the Taliban.

In a brilliant campaign, a relatively small force of American Special Forces, Army Rangers, and Marines, supported by American airpower, and paramilitary CIA personnel already on the ground, led and assisted Afghan resistance forces in both the north and south of the country and in less than ten weeks drove the Taliban from power and secured much of the nation, without a large scale invasion.

The cost over the decade and a half have been incalculable. Nearly seven thousand American military personnel – the best among us – have died, with tens of thousands wounded. Almost $7 trillion dollars of national treasure has been spent.

The end does not seem obvious. It is a story Americans have come to know only too well.

The military was once again sent into harm’s way and did everything asked of them and more – even though Washington shackled them with dangerous rules of engagement that resulted in untold casualties for Americans while sparing the enemy. Lawyers were inserted between bombs, missiles, and the terrorists. Worse, the implication was that the modern war could be made pretty, acceptable, and antiseptic in nature if only the really smart people “manage” it well.

But, war’s true nature is known only by warriors.

It is a bitter irony that from Korea and Vietnam forward, the “wizards of smart” that constitute the “ruling class” of American diplomats, intellectuals, academics, politicians, and foreign policy experts are consistently wrong – but consistently in charge.

Their global, interventionist worldview has only really been challenged twice in the last half-century, first with Ronald Reagan, whom the ruling class detested. They fought him tooth and nail (much as they are doing today) as he successfully battled to bring the Soviets to their knees without a shot fired. The second is happening this very moment as President Trump has gone off script and is tackling world issues directly outside of the established “process” and with only a passing nod to what the experts who created this mess in the first place have to say.

The terror attacks of 9-11 dragged the nation into more than wars. They have also changed the way Americans live and travel at home, emboldened massive meta-data collection on virtually every American, and facilitated the centralization of even more power away from the states and citizens to the vast, unaccountable administrative state. They provided the pretext as well for the centralization of intelligence organizations and the creation of the Department of Homeland Security, under the “big is better” banner. Of course, it’s worse, not better. It’s Washington.

The other thing lost in the 9-11 attacks and the ensuing wars was even more public trust. Once again, Americans were confronted with what President Trump bluntly labels “stupid policies.”

Americans watched the Towers fall. They endured the trauma of a nation at war while at the same time, they saw the political elites, the ruling class, carrying on with business as usual. While America was “nation-building” in two different countries that never seemed too interested in western democracy, its own citizens were growing weary of perpetual war, fought with rules that ensured that some of the nation’s best would die and that instead of victory, whatever that might look like, there was only the long war.

Familiarly, what was promised by the political class never happened.

There were never good answers to the tangled mess that is Afghanistan and Iraq. Not now, not ever. President Trump knows this in a way Washington can’t. Now, as he continues the draw-down of forces as he promised he would, the President faces the question that seems never to have an answer. What now?