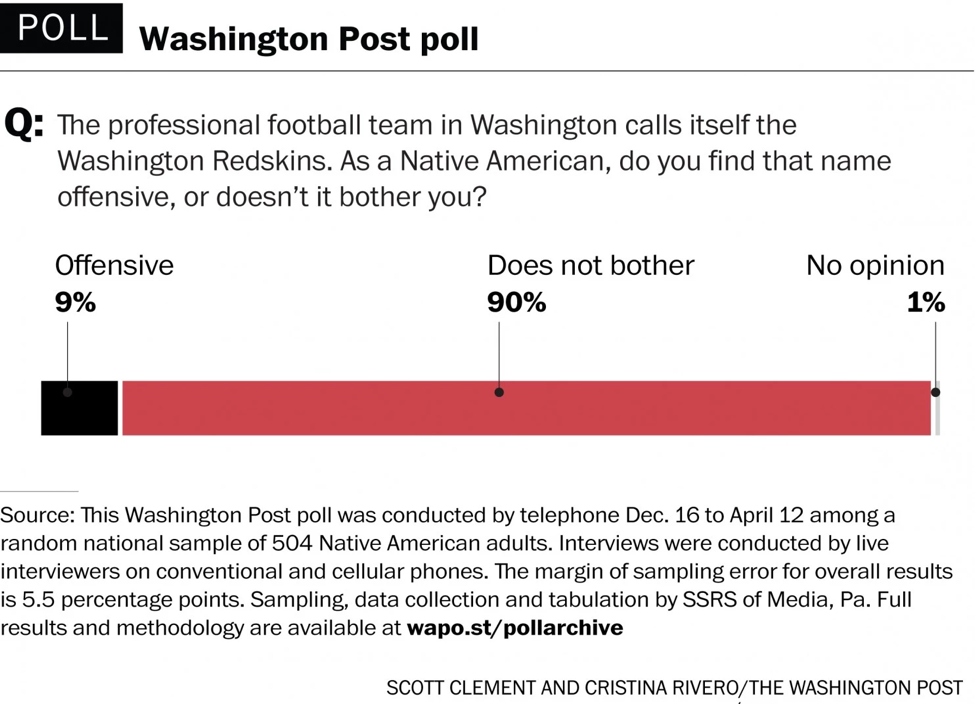 WaPo Poll: 90% of Native Americans are not bothered by Redskins name

It’s got to be frustrating to the current generation of leftist professional cause-followers that all of their collective outrage about the supposedly offensive team name has failed to convince the supposed victims of this 83-year-old hate crime that they should be upset.

According a new Washington Post poll, only 9% of Native Americans are bothered or offended by the name, while fully 90% aren’t…the same result a similar poll found on the question 12 years ago, in 2004.

That means that all the protests and boycotts and social media scoldings have done nothing to change the minds of the alleged victims of this supposedly horrific manifestation of ugly American racism. In fact, it is despite the fact that President Obama and 50 Democrat U.S. Senators have spoken out against the name, and some media outlets have banned use of it.

A reasonable person might be tempted to conclude that the term “Redskins” is, then, in fact not a “slur,” (regardless of the dictionary being consulted by the Post). Rather, they might actually believe the 90,000 fans who every week “Hail to the Redskins” in an act of veneration. That’s how many Native Americans apparently see it. From the Post:

‘I’m proud of being Native American and of the Redskins,’ said Barbara Bruce, a Chippewa teacher who has lived on a North Dakota reservation most of her life. “I’m not ashamed of that at all. I like that name.”

Be that as it may, though, we all know this issue isn’t going away. The leftist obsession with denigrating and shaming anything race-related that isn’t itself born of the left will not stop. Thus we find those whose professional livelihoods depend on generating outrage making the most ridiculous counter-arguments:

‘Native Americans are resilient and have not allowed the NFL’s decades-long denigration of us to define our own self-image,’ wrote Oneida Nation Representative Ray Halbritter and National Congress of American Indians Executive Director Jackie Pata. ‘However, that proud resilience does not give the NFL a license to continue marketing, promoting, and profiting off of a dictionary-defined racial slur — one that tells people outside of our community to view us as mascots.’

Riiigghhht. Veneration of one of the great cultures of our American melting pot is equated to hurling slurs and treating a whole ethnic group as “mascots” instead of as equals, even when a preponderance of the members of that group disagree.

Tell that to the Minnesota Vikings.

What’s really going on here is a whole generation of activists with “Selma Envy.” Every cause, every perceived injustice or “microaggression,” means reaching for the powerful levers of “social change” so that today’s lefties can strut and preen to each other about what good social justice warriors they are, just like the actual moral titans of the 1960s Civil Rights Movement.

You see, as these poll results show, it’s not about actual injustice, or actual injury. These folks don’t really care what the alleged victims even feel. Instead, it’s about the moral vanity of the crusaders themselves.

WaPo Poll: 90% of Native Americans are not bothered by Redskins name was last modified: May 19th, 2016 by Chad Ochocinco
#RedskinsCaucusRedskinsWashington Redskins
14 comments