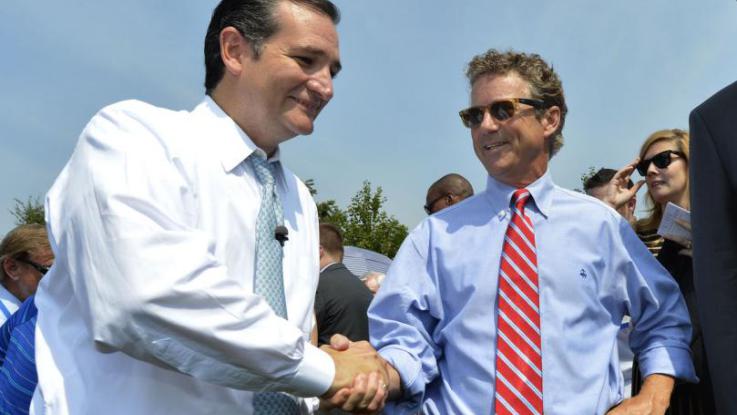 By now, we’ve all picked our favorite candidate, and it’s always infuriating (especially for those of us that volunteer or are otherwise invested) to watch all the other candidates say mean things about our guy. However, this is politics after all, and the Ted Cruz/Ronald Reagan, let’s be nice to everyone strategy is almost never employed in modern politics. The consultants will tell you that to win you have to eviscerate the competition and the candidates listen to the consultants.

So, here is a reminder that this current crop of politicians running for the Republican Party really aren’t that bad.

Jeb Bush: Jeb Bush is as establishment as they come and we all know that if elected, he’ll bring back all those Bush staffers we’ve come to hate. However, he was a relatively conservative Governor, and he didn’t permissively spend, like his brother George W. Bush did, while he was Governor of Florida. Jeb isn’t mean or nasty. Outside of being a corporatist, he’s not otherwise corrupt. His would be able to attract some qualified (by Washington DC standards) cabinet members that wouldn’t threaten the future of the nation.

John Kasich: John Kasich was there during the Gingrich/Conservative revolution that erupted in response to HillaryCare and the Clinton Presidency. He did help balance the budget. He’s not been completely horrible as governor, despite his idiotic Medicaid expansion. Plus, despite buying into Medicaid expansion, Governor Kasich has been actively trying to get the Federal Government out of the States and is, at least by virtue of rhetoric, a supporter of the tenth amendment. Kasich has the experience as a legislator and as an executive.

Rand Paul: Rand Paul is fantastic. He’s a freedom movement guy, a severe Constitutionalist, and boasts one of the most conservative voting records in the United States Senate. Sure, he backed Mitch McConnell and his campaign has been somewhat of a mess, and his foreign policy seems more like a vague suggestion than an actual policy; but is there any doubt he has the best interests of the United States at heart? He wants us to live free in an actual Constitutional Republic and that’s just fine by me. I think he’d make an outstanding President.

Marco Rubio: Senator Rubio is certainly in the top ten when it comes to conservative voting records in the United States Senate, he’s got strong Christian values, is a fierce debater, and he has proven the ability to rally a great deal of Republican support during his campaign. Like Governor Bush and Governor Kasich, Rubio is horrible on immigration and foreign policy, but when it comes to domestic policy, he’s not that bad and would certainly be immeasurably better than Hillary Clinton or Bernie Sanders.

Donald Trump: Trump could kill people and his followers would still love him… and that’s not nothing.

Dr. Ben Carson: Quite possibly the nicest human being ever to run for President. Sure, his leadership abilities are questionable, but his intelligence is not. This whole argument about Barack Obama not being a good president because he didn’t have any experience is hogwash. He’s a bad President because he’s a Marxist. Does anyone really believe that Dr. Ben Carson would surround himself with unqualified people? Do you think he would nefariously and deliberately harm this country?

Ted Cruz: Ted Cruz is a strict Constitutionalist and Conservative. He’s been consistent, deliberate, and intensely motivated to represent those of us in the Republican Party that feel like we’ve been ignored. Some folks don’t like the way he looks or sounds when he talks, nor appreciate the way he behaves, but there is no doubt that he’s the real deal: A Reagan Conservative. I cannot imagine a better flag-bearer for the Republican Party.

So you see, there are many reasons to be thankful for the current crop of Republican Candidates. It’s not like our candidate of choice is perfect and all the other candidates are irreparably flawed, no matter what Trump tells you. So, cheer up, and remember, come November, we’ll all (minus the Trump and Paul supporters) likely be voting for whoever wins the Republican Nomination. It does little good to invest so much hate toward the opposition of our own personal candidates.

Originally Published at PendletonPenn.com
A Brief Break from the Hate: (Sort of…..) was last modified: January 24th, 2016 by Steven Brodie Tucker

Steven, the problem with the so called bench is that it is more than happy to sell out conservatives over and over and over. Take little Paulie Ryan or better yet the Bushes. What big government program don’t they support? The Crumnibus is the most heinous example presently of what you get from the GOP. Know why that happens Steve? There were more than a few crumbs in that Crumnibus for GOP donors… in fact a whole loaf was there. And then there is immigration and the endless quest to be interventionist around the globe. Neocons control the GOP on this issue. Bomb bomb bomb is their mantra… “McCain, John, loser GOP candidate and Senate Pretend Conservative.” One TRILLION DOLLARS

Oh, COME ON. Say nice things about Fiorina, Santorum, Huckabee, and Gilmore (and something snarky about O’Malley) also.

Hey Brodie, pretty obvious that this is an ill-disguised pump piece for Ted Cruz. That was painfully obvious when you dismissed, Bush, Kasich, and Rubio as “… horrible on immigration
and foreign policy.”

They are terrible on those issues, but they are still better than any democrat running. And at least their supporters wouldn’t back them if they started killing people.

Hmmm, agreed with the gist of this article. Although I disagree with some people in this race, Trump and Bush, and I personally dislike a candidate, Kasich, I don’t outright hate any of them.

And quite frankly, I get tired of the hysterical(and I don’t mean funny) and outraged name-calling that comes with primary season.

WOW! How off base! Should I go point by point? Cruz consistent? Chief flip-flopper…Bush, fiscally responsible? STATE law required him to be so.. As a prez. no restraints. Trump? You’re passing on that bogus “I could shoot someone on Fifth Ave” meme.. (He was quoting his distractors that was dissing his supporters.. .geez….). Carson.. dead on.. Rubio? Since when is immigration and illegals not a domestic issue? Paul? Isolationist that WOULD do damage to the country… to the level that Obama has done!.. Christie? fairly accurate.. Kasich? How can you be supportive of the 10th and enable the feds to strip the 10th with Medicare expansion? Ya need to go back to the drawing board on this one!

Most of this is exactly what the author was stating we are taking a break from.

Although you are correct on Carson.

This was supposed to be fun… A conservative freedom movement guys attempt to say something nice about all the candidates he disagrees with. Apparently, the niceties were briefer than intended.