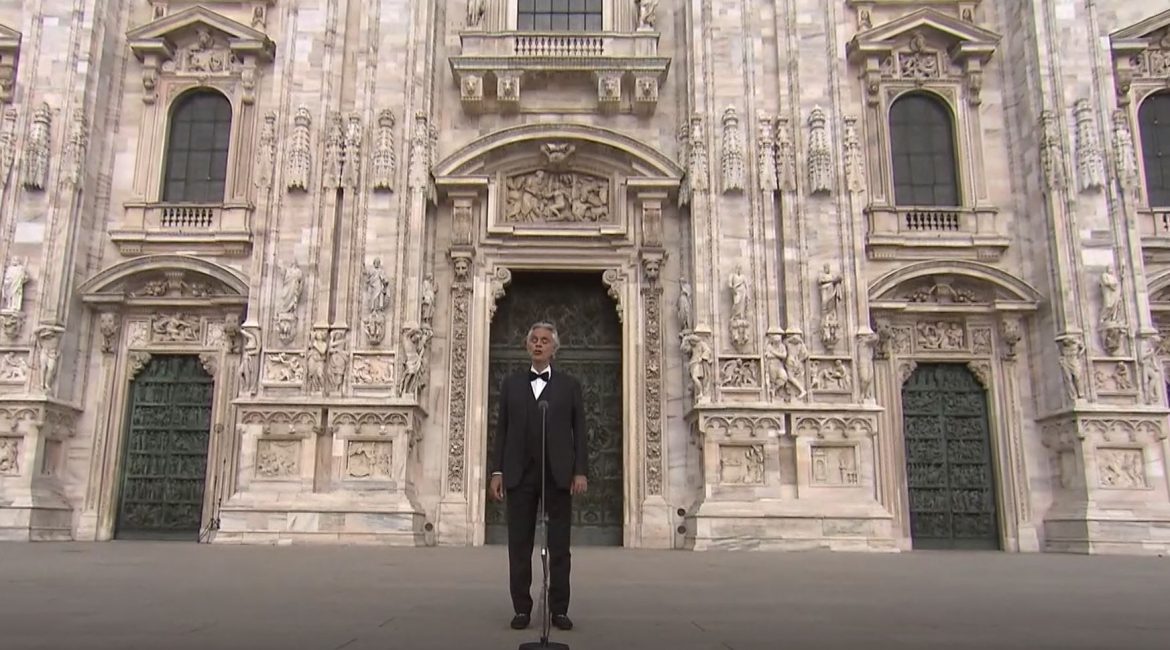 A Concert of Hope

I am out in the garden trying to pass the self-quarantine time constructively.  My next-door neighbor suddenly pops out of her garage. BOB, HAVE YOU SEEN THE CONCERT OF HOPE FROM MILAN.  Who did it? ANDREA BOCELLI. HE SANG AMAZING GRACE AT THE END.  YOU HAVE TO SEE IT. I like Bocelli.  Not only is he a fine operatic tenor but a very decent man.  He also happens to be blind.

The Easter concert was quite unusual.  It was performed In Milan, one of the cities in Italy absolutely decimated by the pandemic.  A drone flew over what is arguably a ghost town. Bocelli moderated during this period and I found his simple words calming.  He was doing this for his town and his people. It was clear that the words were heartfelt, yet there was sense of sadness in them.

The concert continued on into the empty Duomo cathedral of Milan.  Inside a lone organist was playing something and then Bocelli entered or, maybe appropriately, was just there.  He began singing the great works of the church, and you can imagine how they sounded in an empty church – both strangely small but magnificent at the same time.  Some of the songs, or more appropriately hymns, I knew and loved. There was Ave Maria. I won’t list the others out of reverence and because you need to see and hear this for yourself.

As I listened, I was overcome with emotion.  I hadn’t realized just how much I had been holding in, and how much needed to be let go.  Needless to say, Amazing Grace performed just outside the cathedral in the courtyard finished me off.  I had to watch a few times just to get through.

The concert lasted a little over 30 minutes.  As of this writing, over 35,000,000 people from around the world have listened to it in just about 2 days.  Bocelli’s act of grace has given the world hope for its future. There is no prize man can give him to honor him for this.  The honor will have to come from God.

The full video is on YouTube, but it is such a phenomenal and inspiring event that you can find numerous internet sites to watch it.  You can watch it here, Bocelli Concert of Hope in Milan, Italy. The reward of this short and beautiful endeavor is there for all to see.

A Concert of Hope was last modified: April 18th, 2020 by Dr. Robert Warren