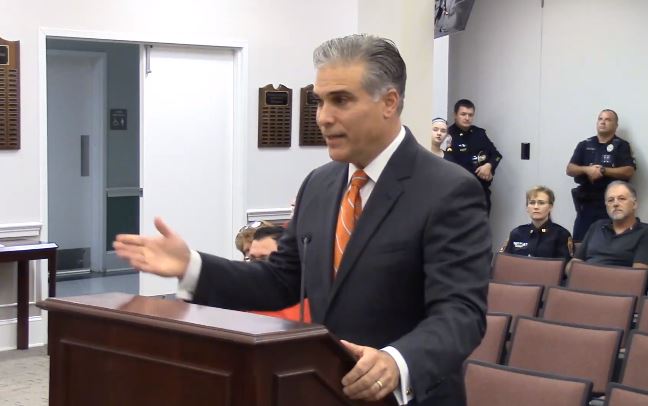 In a 4-2 decision last night, the Front Royal Town Council appointed long time Conservative activist Matt Tederick to be the Interim Mayor.  Tederick, a former Warren County Republican Party Chair, has a reputation of being a fair yet no-nonsense administrator that Front Royal and Warren County both need after being rocked by a series of scandals.

Former Front Royal Mayor Hollis Tharpe was recently indicted on a charge of soliciting sex with a prostitute, and all of Warren County has been dealing with the EDA (Economic Development Authority) where former Warren County EDA Chair was arrested for her role in losing $17 million dollars of taxpayer money.  Other Warren County elected and appointed officials have been called in front of the a grand jury, and the scandal has been stated as the reason that County Sheriff Dan McEathron had to resign earlier this year (Note that Mr. McEathron was found dead in an apparent suicide earlier this week). The Mayor’s term is up in 2020 and a new Mayor will be voted on in the Town elections then.

Tederick is a 1989 graduate of VMI, and was a member of the Airborne Rangers.  Tederick is currently the Vice President of Gentle Knight Solutions LLC a PR firm that also dabbles in health care and IT management.  Tederick is a former member of the local Chamber of Commerce, Warren County Tech Committee Chairman, and was once recognized as the Warren Small Business Veteran of the Year.  Tederick is also the former 6th Congressional District GOP Vice Chairman, and during his tenure, Tederick had a reputation of being a reformer, who was part of the efforts to end the Incumbent Protection Act, one of the last vestiges of the old Harry Byrd Machine.  https://gks3.com/#team

Tederick is a conservative’s conservative.  He will bring a can do attitude and spirit to a region which has been tainted by scandal.  Tederick will be sure that the Town’s “trains run on time”, and will be a leader who will demand excellence from the Town bureaucracy, will be respectful yet firm, and will always be mindful that government works for the citizenry, not the other way around.

Matt Tederick will do Front Royal proud – and will help to make Front Royal great again!!!