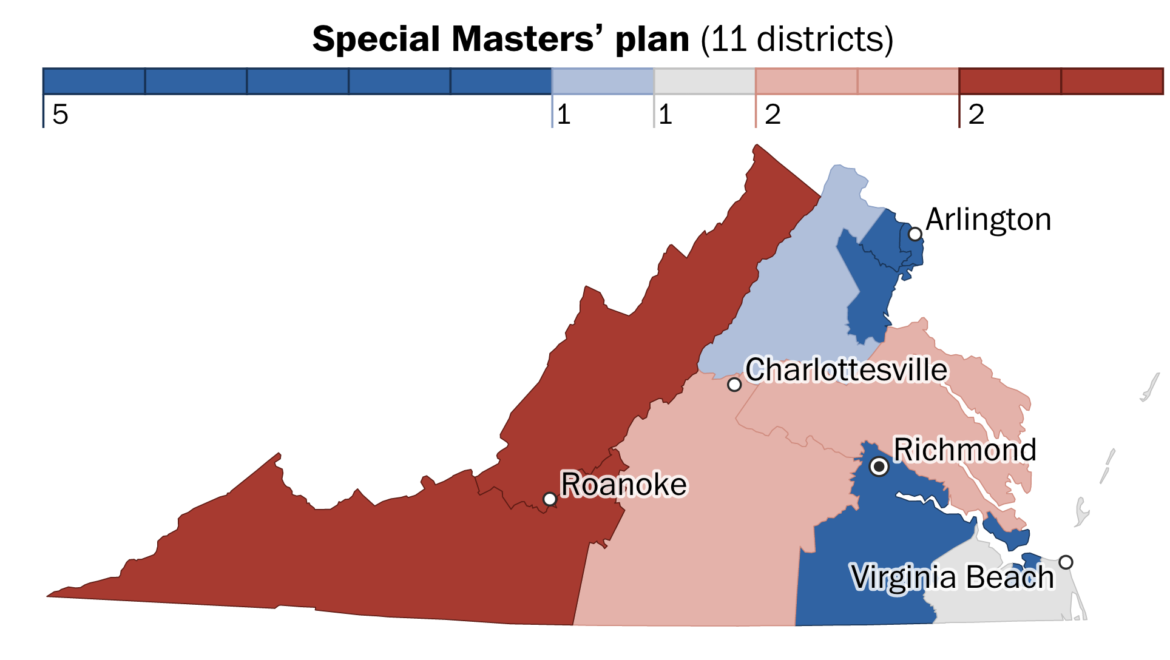 A first look at redistricting

Every ten years, following the U.S. Census that occurs in years ending in zero, political borders are redone within states. This is often done by the legislature in each state. That unfortunately often leads to gerrymandering, a practice that sets boundaries for the sake of political advantage rather than for the sake of the people in the district. In 2010, Virginiaâ€™s General Assembly set some strange boundaries with a lot of weirdly shaped districts.

Recently Virginia passed a constitutional amendment that now creates a special redistricting commission that represents the two main political parties equally. The commission is supposed to set new non-partisan district boundaries. Unfortunately, the commission could not reach an agreement â€“ for political reasons â€“ so the newly passed constitutional amendment throws redistricting to the Virginia Supreme Court. The Court appointed two â€œspecial mastersâ€ to recommend new district lines to be approved or amended by the court.

The special mastersâ€™ first draft was released on December 8. The Supreme Court is allowing public comments, and the lawyers for political parties and individual elected officials will surely weigh in on proposed lines. Even though the Supreme Court has not at this writing announced how it will proceed from here, those with some knowledge of these matters believe that the Court will make a final determination in January, but it could be earlier.

All 40 state senate districts and all 100 delegate districts have been radically changed in the draft proposal. That is evidenced by the equally stark changes in the boundaries of Virginiaâ€™s congressional districts.

Federal law limits the U.S. House of Representatives to 435 total members. They are divided out to each state based on the percentage of the countryâ€™s total population who reside in that state. For example, Alaska and Montana have relatively small populations so they have only one Congressman each. Because of population shifts revealed by the census, California lost some of its Congressional seats and Texas gained seats. Virginia retains the eleven Congressional seats it had prior to the census.

Dividing Virginiaâ€™s population by eleven Congressional districts leaves a target population for each Virginia district of 784,672. The draft presented by the special masters leaves every district within a quarter of one percent of that total. Because of differences in population growth in the Commonwealth, Congressional districts in the western part of the state necessarily have to become larger in geographical size in order to contain the target number of citizens.

When redoing the Sixth and Ninth Congressional District lines, the special masters agreed that the Blue Ridge Mountains provided a natural dividing line for â€œcommunities of interest,â€ so they tried to keep those two districts on the west side of the mountains. The proposal for the Sixth District comes within 0.16 percent of the target population. To accomplish that the draft moves Craig and Allegheny Counties and the Cities of Covington and Salem from the Ninth District into the Sixth along with several additional precincts in Roanoke County, which was already split between the two districts. Additionally, the Sixth also gets Frederick and Clarke Counties and the City of Winchester from the Tenth District at the northern end of the district.

To bring the Ninth up to the target population (within 0.17 percent), their lines moved east picking up the part of Henry County that was not already in the Ninth along with most of Bedford County (except for the Forest area just west of Lynchburg) and all of Franklin County as well as the city of Martinsville.

The Fifth District has been geographically the largest, most spread out district in Virginia. That district would become much more contiguous (as the law requires). To do this, the draft would move the counties north of Charlottesville (including the northern half of Albemarle County) that had been in the Fifth into the Tenth District. To bring the Fifth up to the target population (within 0.14 percent), the draft would move the Forest area of Bedford County, Amherst County, and the City of Lynchburg from the Sixth District to the Fifth. Additionally, the draft would add Amelia and Powhatan Counties along with the western half of Chesterfield County to the Fifth.

The other proposed Congressional Districts bear little resemblance to how they look now. They are much more contiguous than they have been although the proposed Second District looks like a trendy capital â€œJâ€ because it wraps around three sides of a District Three that is comprised of the four cities in Hampton Roads.

At first glance, it appears that the draft could leave more districts leaning Democrat than would lean Republican. That should be addressed at length before the Court makes a final decision.

To learn more about the draft proposal, go to www.virginiaredistricting.org and click on â€œinformation pageâ€ in the first paragraph.