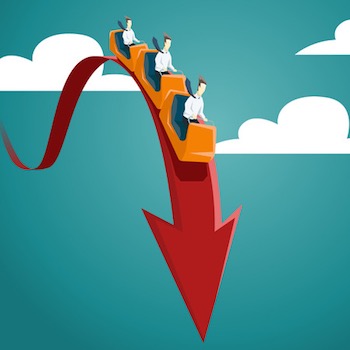 More people are working yet production (what GDP measures) is going down.  The Bureau of Labor Statistics (BLS) June 2 release https://www.bls.gov/news.release/prod2.nr0.htm# reported that during the first quarter of this year, labor productivity decreased an amazing 7.3 percent since hours worked increased 5.4 percent and output decreased 2.3 percent.  BLS notes that this is the largest decrease in productivity since 1947, when the economy was struggling to shift from building bombers to washing machines.

What has caused the decline?  Several possible explanations are offered: COVID is causing high unplanned absences, supply chain problems, and more experienced baby boom workers retiring to be replaced by less skilled new workers.   In a recent interview, Scott Kirby, CEO of United Airlines:  https://lemonadamedia.com/podcast/why-air-travel-is-such-a-mess-with-united-ceo-scott-kirby/ noted that United Airlines may be forced to hire up to 5% more workers just to deal with sickouts.  Obviously, supply chain problems causing disruption in production, such as the auto industry faces from the chip shortage, also hurt productivity.  Forcing experienced workers, such as pilots, to retire at what now seems an early age is yet another problem.

But let us not forget another source of lost productivity:  the government.  Every new government regulation forces businesses to divert some time and money to compliance, resources that could otherwise be used to grow production.  Government programs to favor inefficient solutions to problems also reduce productivity.  Subsidizing “green” energy production raises energy costs, reducing productivity.

(Remember: if you are subsidizing something, it probably isn’t the efficient solution, otherwise it wouldn’t need to be subsidized)! And Scott Kirby also claimed air traffic controller shortages and delays are a big part of the airport problem!  The air traffic control system is entirely run by the government.

Reversing this decline in productivity is essential and should have the highest priority if we are to address any problem you choose to mention.  Without higher productivity, we won’t be able to increase military spending, medical benefits, address environmental concerns or continue welfare programs.  Sure, the government can print money and direct the funds to favored uses, but resources diverted to those uses must be taken from other uses, raising inflation and decreasing everyone else’s standard of living.  Given current budget deficits and plans to expand government largesse (I’m talking to you Senator Manchin and the other democratic senators), which will further hamper productivity gains, additional inflation will be inevitable. Declining productivity means a declining standard of living.

sure is hot out

The trolls will like this. Geico is apparently shutting its 38 offices in California because California law is preventing it from raising rates to compensate for inflation. Geico consumers can still purchase online insurance online and get claim service. You innumerate idiots just can’t comprehend inflation so, guess what, you will get to enjoy it

Also interesting that Democrats and in particular the Biden/Harris Administration lacks concern to address housing issues with Americans that are at the poverty level.
Yes by Biden taking COVID funding and redirecting it to pay for hotel and food cost of Central American immigrants while disregarding Americans shows where his loyalty to Americans is and where his UN American heart lies. Oh yea and didn’t Pelosi push that COVID Funding through (for the Biden Immigration Policy)
WFXR Fox 21-27 Local affiliate Roanoke, Lynchburg, Danville and New River Valley ran a story this morning about folks in Virginia (Virginians/Americans) that have been homeless and waiting for their Elected American Administration for a little help.

You won’t see AOC crying that one up.
Senator Tim Kaine is more concerned with getting a 10 year old girl an abortion in Ohio who was raped by an illegal alien which Democrats Immigration Policies allowed.

With the new Democrat lie of Multi Trillion Dollar legislation named the “Inflation Reduction Act”
How do tax credits for electric automobiles and batteries Made in China reduce inflation in America and increase American Employment, wages all while reducing the family expenses just to survive?

The Joesession is real.
Democrats are infected with the virus that eats away at reason and common sense, it is know as
Donkey Pox

Cracker Barrel puts vegetarian sausage on the menu AS A CHOICE and the entire Republican Party loses their minds!!

The Conservative Political Action Conference in Dallas, Texas was a sign of fascist direction being chosen by American conservatives.

Hungarian Prime Minister Viktor Orban won over the crowd at CPAC Texas on Thursday, arguing that his nationalist agenda in Hungary aligns with the goals of the American conservative movement – and sounding a lot like the conference’s upcoming Saturday keynote speaker, former President Donald Trump. The right-wing European leader hit guaranteed applause lines – including telling the Texas crowd that ‘Hungary is the Lone Star State of Europe’ – and criticizing liberals, the news media and the Democratic Party.

The Republican focus is “the economy stupid”

Now for Democrats just two months ago Hilary Clinton said;
“Democrats should be focused on winning the next election not activists issues” yes only “winning elections”, nothing more.

Now that we have cleared up your off topic misleading lies let’s get back to the employment issue under Democrats Biden/Harris and Pelosi.
1) How many work capable Americans and immigrants in America ?
2) How many are actually working?
3) Break it down in each sector of our American economy.
4) How many manufacturing plants open in each state? What are their sector in our American economy?
5) That was how many Trillions sent to China?

Now once again back to you Vaginal Kaine
Stop teaching perversions to minors and get to work.

Can’t say I have paid attention to the latest Congressional boondoggle… that reconciliation bill… but is it true like our friend Johnny D Martin says below that it will reduce the deficit by 100 billion… is that the claim? Hold on
HHAHAHAHAHAHAHA!!! That’s a good one…a whole 100 billion…. The US left 85 billion dollars worth of equipment in the great Afghanistan bugout!! The gumment prints up and spends 100 billion every day…
Well there has to be more bullsh.t promised in this reconciliation bill than that… Doesn’t it promise unicorn fart green energy and billions of new green jobs?

It really isn’t that hard to get some facts, yanno

“The gumment prints up and spends 100 billion every day…”

The Bureau of Engraving and Printing produces 38 million notes a day with a face value of approximately $541 million.”

“The US left 85 billion dollars worth of equipment in the great Afghanistan bugout!!” Such bullshit

“most of the equipment provided to the Afghans was used in fighting over the last 20 years, and “we junked most of it,” Cordesman of the Center for Strategic and International Studies told us in a phone interview. “War tends to use stuff up in a hurry. Nor should anyone assume the Taliban will have the expertise or wherewithal to operate all of the equipment. ”

Inflation Reduction Act is a really good bill and will do lots of good things, badly needed improvements long overdue.Deficit reduction is now projected to be over $300B

UA used Covid (and our tax dollars) to offer incentives for early retirement for a large chunk of their work force. Many took it!! They are now surprised they have to replace them and that the younger, new (and cheaper) employees are less productive? But, yeah, it’s all because of “sick outs”… keep buying that line….

UA went woke and it is no surprise they find themselves in trouble. When critical thinking is abandoned for ideological wokeness, bad things happen.

We have passed Trillions upon Trillions for job growth yet just a week or so back a story here at TBE only had Virginia at + 500 Construction jobs.
This is direct evidence that tax dollars don’t create jobs.
Now on the other hand capitalism has Caesars building a casino in Danville Virginia and expected to create 900 jobs, just in construction alone.

“Given current budget deficits and plans to expand government largesse (I’m talking to you Senator Manchin and the other democratic senators), which will further hamper productivity gains”

Bullshit……..pass it and reduce the deficit by $100B. You have a problem with that?

Oh boy Dunderhead Martin… a whole 100 billion… Your stupid President has already spent 60 billion on Ukraine alone… with more promised…. 100 billion is a piss in the bucket for this government… God you are stupid…

When will you learn that government isn’t productive?