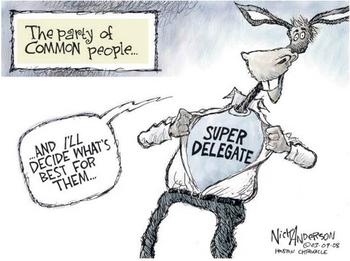 A Great Recruitment Tool for the GOP

written by Taller Than Madison February 14, 2016

â€œWe separate [delegates] so that we donâ€™t have elected officials and party leaders running against the activists, but want to make sure are helping to diversify our convention. That is something we take great pride in. A Native-American cancer survivor. Those people should have an opportunity to be delegates, too. And they shouldnâ€™t have to deal with well-known officials and party leaders. And thatâ€™s why we separate them.â€

How compassionate. Of course that creates the scenario where party leaders donâ€™t â€œhave to deal withâ€ the voters who elect them. Also, we would like to officially nominate â€œA Native-American cancer survivor. Those people should have an opportunity to be delegates, tooâ€ as the quote of the year for 2016.

Her explanation is no gaffe. She said the same thing on another show.

â€œUnpledged delegates exist really to make sure that party leaders and elected officials donâ€™t have to be in a position where they are running against grassroots activists.â€

She doesnâ€™t get it. At this point, she never will.

But we must try to educate our misguided friends who are Democrats. We need to talk to them about democracy. Tell them about our democratic republic and how we have a Constitution, not ruler, who ensures our liberties. Tell them about the representatives who are in charge of defending our Constitution are elected by the people, not by an elite ruling class. Let your Democratic friends know that their Super Delegates have bargaining stakes, their own interests and exclusive access to the candidates, all of which the average voter doesnâ€™t have. Explain that this allows an entrenched party insider to lean on delegates for years and make deals with a group that acts like a ruling class.

They may push back and say that the voters ultimately decide the election. Thatâ€™s when you point out that despite a win in New Hampshire of 60% to 38%, Bernie Sanders gets only one more delegate than Hillary Clinton. Is that something that reflects the will of the people?

Super Delegates can endorse publicly and mobilize resources to persuade delegates to vote for their favorite choice. Call it campaigning, which is completely democratic. But it gives a great advantage to whoever the ruling class has decided to anoint. In this case, the ruling class of the Democratic Party has decided on another Clinton. The ruling class will decide who the voters will elect. But the Constitution says the voters decide who gets elected. This is where you ask your Democratic friend which way do they prefer?

All of this best serves the nation as a recruitment tool. If you are a just an everyday Joe Six-pack then ask yourself which party is actually listening to its voters and which party allows handshake deals in private rooms to yield concessions so big they can thwart the will of the electorate? Hint; Republicans donâ€™t have Super Delegates.

A Great Recruitment Tool for the GOP was last modified: February 14th, 2016 by Taller Than Madison

This is how the Democrats do it and I’m glad. What nobody is talking about is an INDEPENDENT Bernie Sanders run should he win the popular vote and lose at the convention. We talk about it with Trump on our side, but the same thing can happen for the Democrats. Hello Chicago 1968.

I just read that NATO member Turkey has deployed troops into Syria this morning, with air support from Saudi AF positioned in Incirlik, Turkey. Their initial target is Aleppo. Why is this not being reported in the US?

You are splitting hairs here my friend or are somewhat confused regarding how a Republican convention is conducted. Does the Republican Party delegate process contain a group on votes assigned to a nomenclature “Super Delegates” no, you are technically correct. Yet the Republican Party will withhold out of the 2,470 total delegate vote count at the Republican National Convention in 2016, 437 unpledged delegates, who play exactly the same role as Democratic super delegates. Of this 437, 168 are members of the Republican National Committee. Your article is not only misleading it is incorrect and I will assume this is due to lack of knowledge on the actual process rather then an intention to mislead.

If we really want to be effective in reaching out to Democratic voters, then there are two things TBE readers and this author need to understand. First of all, as George Carlin said years ago, “Elected politicians are there just to give us the illusion of choice. Forget it. There is no choice.” Second, we need to understand the WHO behind this move. That is, WHO set up this sham system, which really does thwart the will of millions of Democratic primary voters? I content that if one looks at the three big donors to the Democratic Party and establishment – Tom Steyer, Michael Bloomberg, George Soros (Schwarz) – then the answer is self evident. As Carlin said, “The game is fixed.” At least in our party we have outsiders who are capable of outflanking and circumventing our entrenched establishment. Just look at what happened to Jeb Bush.

Very good points! Yes, the GOP IS much more grassroots driven, thank goodness. And that’s by design. Of course we have plenty of elites/establishment in our own party who want to wrest power back into the party upper-eschelons too.

Thanks, Bull Elephant for continued transparency on the party!