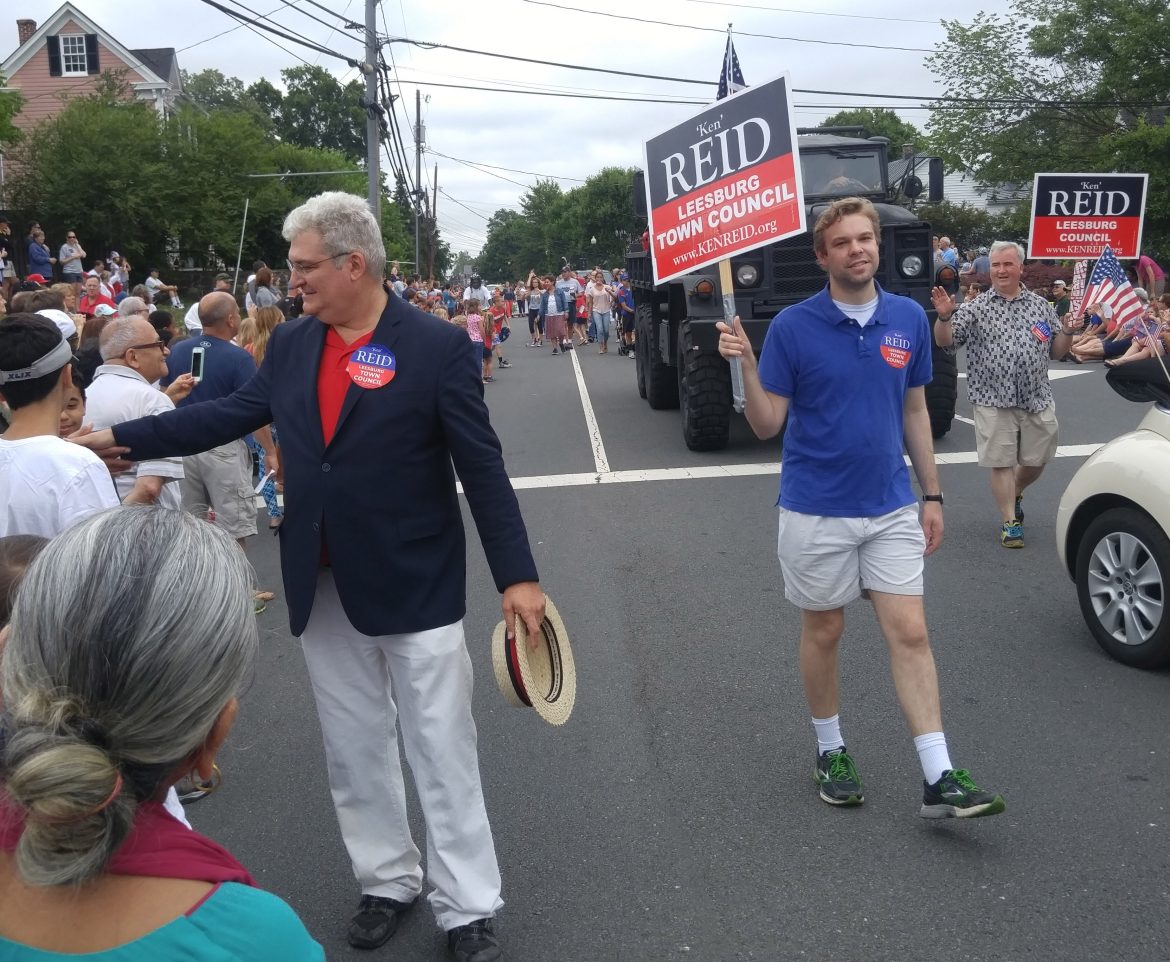 The author marching in a past Leesburg 4th of July parade

MYRTLE BEACH, SC – I am on vacation with my kids here, and we learned today that there’s been a spike of coronavirus cases among Loudoun County youth who vacationed here – and my son, who lost his job due to the shutdown in California, is living with his mom in Leesburg.

Just the news we need to hear as we enter the 4th of July weekend, with no chance for fireworks or large celebrations like parades – unless you want to set them off and destroy monuments, and then the liberal mayors and governors put aside all their social distancing rules.

Not this year due to COVID 19 and even if we had no lockdowns, with the rioting and tensions in major cities, I wonder if the celebrations would be subdued there, too.

I should be more hopeful, but must admit that I am depressed when I see rioting and the destruction of monuments and its acquiescence to the shakedown group Black Lives Matter by major politicians and corporations.  I see America being torn apart by radicals in the worst way since the late 60s and early 70s – an era I lived through and remember like it was yesterday.

John Adams intended for Independence Day to be   “celebrated, by succeeding Generations, as the great anniversary Festival. It ought to be commemorated, as the Day of Deliverance by solemn Acts of Devotion to God Almighty.  It ought to be solemnized with Pomp and Parade, with Shews, Games, Sports, Guns, Bells, Bonfires and Illuminations from one End of this Continent to the other from this Time forward forever more.””

He never mentioned “fireworks” and he was actually referring to the 2nd of July when the Declaration of Independence was adopted by the Continental Congress, but other than “blackouts” along the east coast in world war II, I cannot find a time when July 4th was not celebrated with the kind of happiness and communal gatherings Adams envisioned.

In Leesburg, where I served 10 years in local office, I marched in pretty much every parade over my 10 years in office.  If I was running for election, we would not vacation that week so I could march with my volunteers and signs.

Leesburg, like a number of communities, hold great July 4 celebrations – a parade and fireworks and concert.  The town puts on a good show.

Not this year.  I guess we can watch reruns of PBS’ “Capital 4th” and hold barbecues over Zoom.

I have never supported these broad-based lockdowns and do not feel the extreme stay at home orders and social distancing requirements were meted out in a targeted manner for the populations most at risk of contracting COVID 19.  The death and hospitalization data proves that more than 50% are over 75 and some 90% had underlying health problems.

I believe that the increase in cases are due to more testing and the mutation of the virus that has helped fuel “herd immunity” in other words, people are getting infected but are asymptomatic.  Some 98% of cases are not serious.

But the media and Democratic governors and some Republicans like Larry Hogan in Maryland have fueled the hysteria, and the national media love talking to the experts, like NIAID’s Anthony Fauci, who has been all over the map in his statements.  The lockdowns were designed to preserve hospital beds and supplies and have morphed into “keeping us all safe” until there’s a vaccine.

Meanwhile, while unemployment figures are lowering and the stock market is inching higher, the prospects for more federal bailouts grows because the free-market economy has been strained.  My son is a casualty.

And Trump, by acquiescing to the public health bureaucrats, injecting himself in the crisis and even saying George Floyd was murdered before all the facts are in has not helped his re-election chances.

And meanwhile, China which caused this disaster continues to plod along – -I hope the nations of the world will seek reparations – unless, of course, “Beijing Biden” is elected president this November.

I don’t like this “new normal.”  Being a political animal, I like to be around people.  I don’t like working at home alone.  I miss kiddush after synagogue services and going to Shabbos meals, but Orthodox Jews, even in Norfolk, are spooked about having guests due to the heavy death toll in hareidi communities in New York and New Jersey – we were among those who needed targeted “mitigation” earlier.

As I look at the turmoil in the country, fueled by the Fifth Column of the academic Left and neo Marxists, who now form the base of the Democratic Party, I will end by quoting Adams:  “I am well aware of the Toil and Blood and Treasure, that it will cost Us to maintain this Declaration, and support and defend these States. — Yet through all the Gloom I can see the Rays of ravishing Light and Glory.”

I guess if Adams were alive today, he would be a Republican.

What Leesburg looked like on the 4th of July in previous years: