A Massive Waste of Human Capital

In the 2012-13 school year, roughly 32,000 students entered Virginia’s public universities. Six years later, some 9,000 of them, 28%, had failed to graduate. And if they hadn’t graduated within six years, the chances were remote that they ever would. John Butcher provides the numbers in his latest post at Cranky’s Blog. 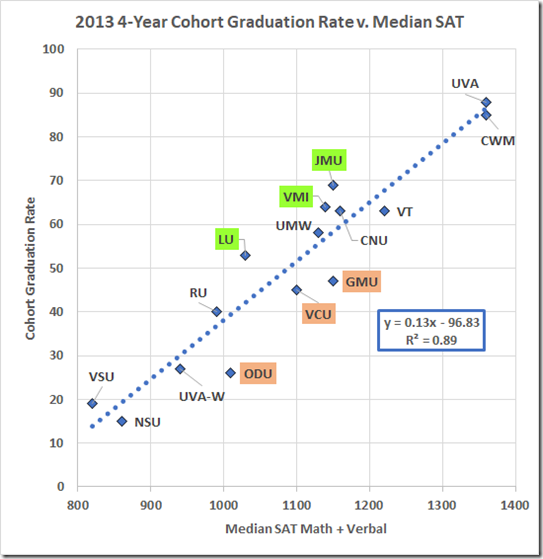 Think of the waste in human capital — 9,000 kids, the vast majority of whom took on student-loan debt and were unable to earn a degree that would give them the earning power to pay off that debt. Nine thousand kids mired in modern-day indentured servitude.

As John points out, the problem doesn’t originate at the University of Virginia or the College of William & Mary, which accept only students with high SAT scores. High SAT scores are highly correlated (almost 90%) with college graduation rates. The college drop-out rate is highest at schools that cater to students with low SAT scores. But even then, some schools do a worse job than others of nursing students through to completion. The biggest under-performers, adjusting for average SAT scores, are George Mason University, Virginia Commonwealth University, and Old Dominion University.

ODU has the excuse that it serves a transient military population. What’s VCU’s and GMU’s excuse?

Why is this a scandal only for for-profit diploma mills?

James Bacon is the publisher of  baconsrebellion.com