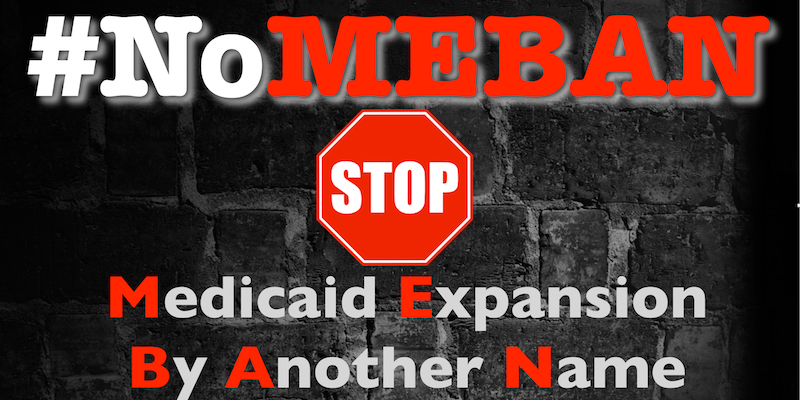 UPDATED: A Medicaid Expansion by Any Other Name…

Ever since his election, Gov. Terry McAuliffe has made expanding Medicaid his signature issue, and he has been working hard to make it happen.  It has taken the continuous effort of devoted conservatives all across Virginia to make sure we don’t fall victim to the siren call of billions of federal dollars in supposed “free money.”  Our very own Steve Albertson brought the first Medicaid expansion attempt to light, which led to the #BlackOrBust campaign that removed Medicaid expansion authorization from the budget.  This time, however, they’re trying to expand Medicaid again, but they are calling it something else.

HB 1204 creates what is called the “Virginia Health Care Access Fund.”   According to the text of the legislation, this new fund is designed to utilize “all funds made available to the Commonwealth for the provision of medical assistance pursuant to 42 U.S.C. § 1396d(y) and any funds as may be appropriated by the General Assembly.”  (That’s Obamacare money, by the way).

This money is to be used to provide “grants” to health care providers who provide “health care services free of charge to newly eligible individuals.” Who are these newly eligible individuals?  According to the bill, they are, “an individual described in 42 U.S.C. § 1396a(a)(10)(A)(i)(VIII) who is eligible for medical assistance pursuant to Title XIX of the Social Security Act who is not otherwise covered by a public or private health plan.”  In other words, people who are now eligible for Medicaid under Obamacare’s expanded rules.

So under this new bill, doctors and hospitals would provide “free” health care to Medicaid expansion eligible patients, then submit the bill to the Commonwealth, and get reimbursed via a “grant” using Obamacare money.  Simple, right?

Like a crack dealer offering free samples, the “free” federal money of Medicaid expansion is designed to get us addicted to that income stream.  Only after we are hooked, though, do we find the strings, and budget-busting financial commitment, that come along to bite us later.   Then, once we have created that new budget “constituency,” it is nearly impossible to walk it back.

The only way to deal with these types of lures is to follow Nancy Reagan’s advice and “Just Say No!”  HB 1204 is currently in Subcommittee #1 of the House Health, Welfare, and Institutions Subcommittee and is scheduled to be voted on tomorrow, Feb. 2, 2016.  Call your Delegate and tell them you don’t want Medicaid expansion under any name.  Click here to find the members of Subcommittee #1 and let them know how you feel.  Tell them #NoMEBAN.

Delegate Minchew has responded with an explanation of his bill:

I can assure you that this bill is not Medicaid Expansion, Marketplace Virginia, or anything like that. You probably noticed that the bill has Senator Black’s 2014 prohibition against Medicaid Expansion baked right into it verbatim. It also does not pledge or commit a penny of Virginia taxpayer dollars.

Put in the simplest words I can muster, this bill basically requests that the Obama Administration return our Virginia taxpayer dollars paid under Obamacare to fund specific health care block grants decided by Virginia in Calendar Year 2016 only.

In 2017, a new federal law provision kicks in that no state can get back any of its Obamacare tax dollars paid without a minimum 5% match. I do not support such a Virginia match, not one penny.

Regrettably, the Supreme Court has ruled this tax constitutional and our only potential source of relief must come from federal legislation.

The Democrats have termed my bill a “crass 2016 money grab” and that it seeks return to Virginia of Obamacare taxes paid by our citizens without any commitment to a permanent solution to what they call the “Coverage Gap”.

I can live with that criticism.

The problem I have with this is very simple.  It is the camel’s nose under the tent flap.  Once you create that budget “constituency” as I mentioned before, you cannot just walk it back.  If you think there is pressure on the General Assembly to expand Medicaid now, try giving folks a taste of “free health care” and then try to take it away.  What do you think will happen?

UPDATED: A Medicaid Expansion by Any Other Name… was last modified: February 1st, 2016 by Mick Staton

Delegate Minchew’s response shows how much he despises his own constituents. The “Virginia tax money” canard in his slimy response is classic. He thinks he can pull the wool over your eyes by quoting the Black amendment.

Anyone in his district up for a primary?

A Medicaid-Expansion-Bill by any other name still STINKS as much. But hey, we can always count on turncoats like Hanger to BETRAY US!

I bet the hospitals love this bill.

HB797, HB1204 and HB1369 all seek to expand Medicaid this year. These people are tone deaf. Medicaid is Virginia’s portion of Obamacare. People don’t want Obamacare. It hasn’t insured everyone, it didn’t let us keep our doctor, it didn’t lower costs and ruined not only excellent health coverage for millions of families but has been detrimental to the job market.

Send a message to your representative in Richmond ASAP to tell them to vote NO on these three bills. Find the emails for your delegate and senator here: http://whosmy.virginiageneralassembly.gov/

What was Randy Minchew thinking when he introduced this bill? Has he not gotten the message that we don’t want Medicaid expansion?

Apparently not. This is nothing more than switching who gets paid. And to think we’re going to unwind this after a year is just crazy or, more likely, completely disingenuous.