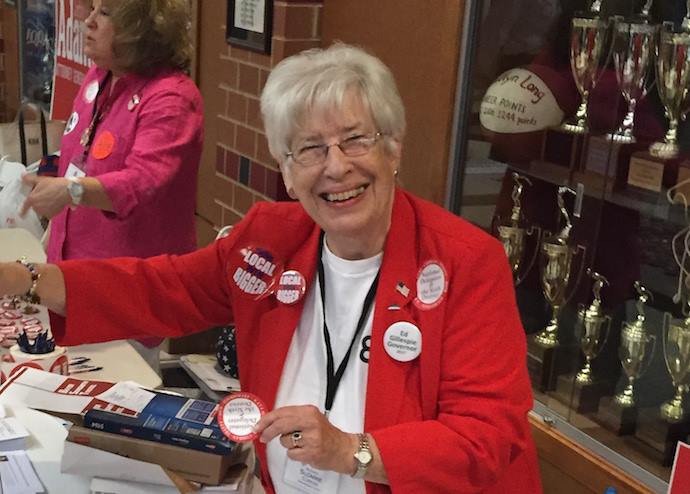 Many dignitaries attended, including (but not limited to) Congressman Bob Goodlatte, Delegates Todd Gilbert, Ben Cline, and 4 of the candidates running for Statewide office.  The keynote speakers were Dr. Carol Swain and Dinesh D’Souza.

For those of you who do not know Suzanne (aka my bonus mom), she was tireless and fearless in the fight for liberty from a tyrannical bureaucracy.  Suzanne was the SCC Vice Chair for the Western region of Virginia.  She donated her time to any and every cause on behalf of conservatism and liberty.  And had traveled extensively around the globe (including SE Asia) to help combat poverty and child hunger. Her resume was too long to list on here.

My bonus mom passed away in 2016 shortly after the 6th District convention.  So she was not here to receive her tribute.  But she would have been proud of the things said about her.  Anne Fitzgerald of State Central gave a glowing tribute to her “3rd grandmother” (guess that means Anne and I are brother and sister) and both gubernatorial candidate Ed Gillespie and Lt Governor candidate Jill Vogel spoke fondly of their many year friendship with Suzanne and told fun stories of their times together, and how one must always do as Suzanne said or else.  The audience both applauded and many of us wept inside.  Sandy Gates told similar stories.  All agreed that Suzanne cannot be replaced by just one person.

Corey Stewart recited the Republican Creed, but decided to tell a joke about how he expected Dixie to be played as he was walking to the podium.

Ms. D’Souza gave a rendition of the Star Spangled Banner that would have done any Super Bowl pre game performer proud.

Don Huffman’s former law partner Melvin Williams told funny stories about having an office next to Mr. Huffman, and about how he and his wife still “stalk” Mr. Huffman’s house to this day. Congressman Goodlatte told war stories about being in the trenches with his friend of many years.  Same with Mildred Scott and the other roasters of Mr. Huffman. John Alderson toasted his dear friend – saying this was too long in coming.

Everyone agreed that Mr. Huffman was the gold standard when it came to GOP chairmen in Virginia.  And Mr. Huffman gave back as good as he got.  And then some!

Dr. Carol Swain gave an inspiring speech about her personal story and how anyone can succeed if they live the Republican creed and to also not alienate others by focusing exclusively on relics of the past.  (Hint Hint Corey Stewart)

Dinesh D.Souza talked about America and conservatism being what keeps us great.  And the true history of the Democratic party and how they have been able to spin their actions and then pin onto Republicans their own sins.  And in this past election – how when the racism charge did not work, the liberals came up with a new spin, that now the GOP is a group of fascists.  Where the real fascists are the progressive Democrats who go out and silence anyone who does not agree with their radical left wing agenda.

All in all – was a great event and showed that the 6th Congressional District is ready to take back Virginia come this November.  Thank you Scott Sayre, Anne Fitzgerald, Matt Tederick, and all members of the 6th Congressional Committee for getting us back on the right path and putting on such a good show.