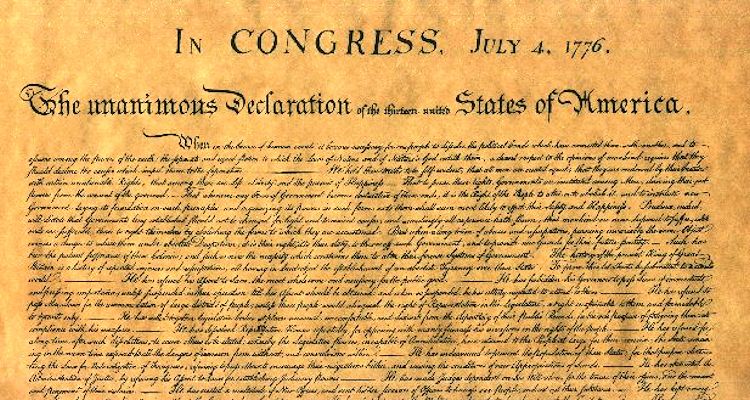 A Quick Refresher: The Declaration of Independence

“We hold these truths to be self-evident, that all men are created equal…” The courts and common morality define this as all human beings are created equal. Period. Conservatives are all about this while liberals believe some classes are more equal than others.

“…that they are endowed by their Creator with certain unalienable Rights, that among these rights are Life, Liberty and the pursuit of Happiness.” This says that many of our rights are God-given. That the right to life cannot be infringed by the State. That freedom to move about and prosper, liberty, cannot be controlled by the State (without due process). That the pursuit of happiness is our unalienable right for us and our families to live our lives as we see fit (as long as we do not impede our neighbors’ right to the same).

“That to secure these rights, Governments are instituted among Men, deriving their just Powers from the consent of the governed…” The powers of government to secure the God-given rights must be just, and they come from the consent of the people. Thus, the people loan to government some of the power given to the people by the Creator, but it is limited power and only for the legitimate purposes of government. I suggest we deviated slightly from this principle. This phrase is the setup to the most important sentence of the Declaration of Independence:

“…That whenever any Form of Government becomes destructive of these ends, it is the Right of the People to alter or to abolish it, and to institute new Government, laying its foundation on such principles and organizing its powers in such form, as to them shall seem most likely to effect their Safety and Happiness.”

Thomas Jefferson could not have made it any clearer. America’s founders desired a land in which men might live in liberty. By declaring independence from the government of England and instituting a new government on this continent, they did not create that government for the sole purpose of having a government, or for creating jobs or propping up the elite, but rather, it was built as a fortress to house those principles that secured our freedoms.

They crafted a document designed to carry and shelter our precious freedom and liberty. Government was a secure container to protect that which they considered to be irreplaceably precious—our liberty. Even the independence they sought was a side effect; the main object was liberty.  Even the formation of the Constitution in 1787, while a divinely-inspired document, was not the object; the object was freedom.

The Declaration then goes on to list its grievances against England, which are numerous and not too different from some of the challenges we face today.

The Declaration concludes with this: “We, therefore, the Representatives of the united States of America, in General Congress, Assembled, appealing to the Supreme Judge of the world for the rectitude of our intentions, do, in the Name, and by Authority of the good People of these Colonies, solemnly publish and declare, That these united Colonies are, and of Right ought to be Free and Independent States, that they are Absolved from all Allegiance to the British Crown…”

In 2018 we are experiencing an American Spring. We are rediscovering our entitled rights. Rights granted by God and those earned by citizenship. The shame is that we are rediscovering them more or less by accident because of President Trump.

The National Archives’ website hosts a page that invites you to sign the Declaration of Independence. After you sign the document and hit ‘submit’ these words appear:

“Are you sure you want to sign the Declaration of Independence? If you had been a member of the Second Continental Congress in 1776, you were a rebel and considered a traitor by the King. You knew that a reward had been posted for the capture of certain prominent rebel leaders and the largest British armada ever assembled was just outside New York harbor. Affixing your name to the document meant that you pledged your life, your fortune, and your sacred honor to the cause of freedom.”

Supporting this President and the Republican Party in 2018 is playing the parts of a rebel and a traitor to the previous administration’s big government mandates and wealth redistribution.

So as you gather with friends and family to watch the fireworks this coming week, will you be thinking about how lucky you are to be a citizen of a country where freedom is a basic right? America is a country where we can dream up ideas and turn them into businesses and hopefully live up to the ideals of our Declaration of Independence and our Constitution.

A Quick Refresher: The Declaration of Independence was last modified: July 2nd, 2018 by Frank McDonough

Thank you Jeanine! Your piece is a quick read and a nice reminder of all we have to be thankful for.

I must apologize for putting my name on the article. I didn’t write it, our excellent poster Frank McDonough wrote it.

“….will you be thinking about how lucky you are to be a citizen of a country where freedom is a basic right?”

And not a citizen of …say… Crimea who Trump has abandoned to our new Russian allies.

Yep, that is pretty much what all of your Russian comrades say.

“That freedom to move about and prosper, liberty, cannot be controlled by the State (without due process).”

Unless you are an immigrant from Central America, of course.

As a Va. Licensed Contractor I do have the right to a proper adjudication process against unlicensed contractors , that is also Due Process.
It appears that illegal immigrants or their illegal employers are not prosecuted (Santurary), this obstructs my pursuit of happiness.
3rd time caught , class felony , prosecute and I don’t care where the hell your from, Mexico, Virginia or BFE.

Not an immigrant, an illegal alien.

Ok,
But deferred action is only for immigration laws , all others must be enforced and they must be compliant just as a citizen. No freebies!
Welcome to America

An ALLEGED illegal immigrant who (supposedly) also shares the right to due process. Except in the unAmerican world of the Trump GOP.

If they were a legal immigrant, they would not be trying to break in — that’s what makes them illegal. Or did you mean if they were successful in the illegal immigration, this means that they gain the same rights as legal immigrants? Finders keepers, squatters rights, posession is 9/10ths of the law? Do you think there should be no limits? How would you determine those? (Because you’re arguing that the law should be irrelevant.)

You clearly do not believe in due process or you would understand my comment. Of course they must not have such protections in your country so your confusion is understandable.