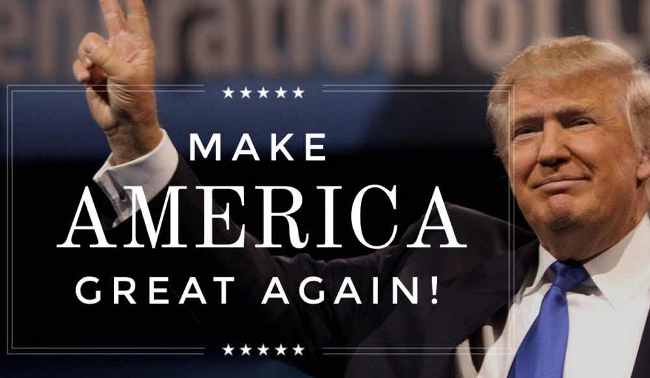 A Ray of Hope

Now comes the task of holding President Trump to his promises, namely:

2) Restore equality of everyone before the law – Democrats are going to especially hate this one – and apply laws (in particular, immigration laws) as written,

3) Support school choice so that all Americans, but particularly those of lower income who live in bad school districts (Democrats will hate this one too) will have an opportunity for a better education and a better future,

5) Reverse every one of Obama’s unconstitutional executive orders immediately upon taking office,

6) Stop the Trans Pacific Partnership (TPP), which is among other things designed to subvert American sovereignty to the will of other nations, some of whom are not yet party to the treaty,

7) Void the Iran deal (this is a treaty that Obama did not care to present to Congress as the Constitution requires, so this will be as easy for Trump to reverse as it was for Obama to ramrod through),

8) De-regulate all over the place,

9) Appoint only from the list of Supreme Court nominees to which he committed,
And, importantly,

10) appoint a special prosecutor to properly address investigate Hillary Clinton regarding exposure of sensitive material under the Espionage Act and also influence peddling via the Clinton Foundation.

Do I trust President Trump to do all these things? No. But we have him on record committed to them, so the job of holding his feet to the fire will be easier, Particularly with a Republican House and Republican Senate. So, there is now at least a possibility that we can reverse the course to totalitarian/Marxist statism that Obama and the Democrats have taken us on over the past eight years.

The Obama reign of terror is thankfully coming to an end. Trump was not my choice (let it be clear), but some very good things can come from his presidency if he can be held to the above commitments.

In other words, this election represents a degree of hope for America.
A Ray of Hope was last modified: November 9th, 2016 by Guest Contributor Dr. Daniel Brubaker

Daniel Brubaker is a scholar in the field of early manuscripts of the Qurâ€™an. He lives in Western Loudoun County Virginia, and is the Chairman of the Tea Party of Loudoun County.

I’m SO proud of our new First Whore

You are still butthurt that Wall Street’s Whore didn’t win the election?

You rightwingnutjobs were all about electing republicans to Congress to provide checks and balances on Hillary Clinton.

Yet, you now are jubilant that there are no checks and balances on Trump.

I guess Constitutional principles don’t mean anything to republicans.

Elections have consequences. Now it is time to punish our enemies…

Do you know which great Democrat President said those two things, numbnuts?

This prevented a criminal like Hillary Clinton from subverting the rule of law by squashing investigations of her filthy family business at the FBI, using the IRS to harass and audit her enemies, creating unlawful executive order granting amnesty to millions of illegal aliens, installing federal judges who don’t give a rat’s bottom about the rule of law as they craft it to their own ends.

You are truly devoid of the ravages of intelligence..

Until the ACA law I would have NEVER felt that Republicans should walk on Democrats to pass legislation without them, but I do feel that way now. The ACA law did it for me. When one party forces something that big through on a party line vote, something that fundamentally changes the entire health care system for every person in the United States in such a profound way, and the other half of the electorate never gets a say in it, that is fundamentally wrong. Fortunately our government is set up in such a way that something like that can’t stand forever, and Progressive seem to just have ignored the fact that Republicans would, eventually, have a voice. Well, they have a voice now.

Democrats are going to whine like kids when the ACA law is overturned, and I hope that they do, because that’s how half of the people in this country have felt for years since the law was passed and forced on them. Cry your little eyes out. Protest in the street. But don’t talk about fairness with Republicans, of unity, or of compromise, because that *&^% won’t fly. The time for compromise was about 2 terms ago when this law was being put in place.

Sucks to lose doesn’t it old_redneck.

Now you know how Republicans felt in 2008, except that Progressives had a super-majority, which was even more terrifying. Your party and President forced the ACA law through on a party line vote. At the time I told some Democrats to imagine how they would feel when Republicans got the majority if they started forcing through legislation that Democrats hated on a party line vote and there was nothing you could do about it, at the time I used the example of an anti-abortion bill. Democrats are in a better position now than Republicans were because Republicans don’t have a super-majority, but Republicans will choose the next Supreme Court nominee, and that’s pretty close to instilling the same fear into Democrats that Republicans felt in 2008/2009.

What goes around comes around, and Republicans are in NO MOOD to compromise, and because of Democrats forcing *&^% on Republicans at every turn there’s no real reason for Republicans to feel that they should have to. Example – your President likes executive actions ? Well, don’t come bitching to us when Trump uses them.

I don’t know what was going through Democrats minds when Obama came into office, I guess they thought Democrats would be in charge for a 1000 years and Republicans would never hold the Presidency and both houses of Congress.

Yes, you are confused.

You got it. Democrat losers are rioting in cities around the country.

One may call, the answering is up to others.

What? No “Return of the Jedi” analogy?
If they can take out the Clinton Foundation, they will put a stake into the money laundering operation of the Democratic Party. Drain that swamp of all its fetid dollars.
I fully expect DJT to follow through on all the above.
It’s a great day 🙂

No better idea for Hillary and Bill are to turn IRS on the Foundation and fine them say $ 400 Million dollars.
Send all the $400 Million to the Vets for care.
Hit the Clinton where it hurt, the pocket book