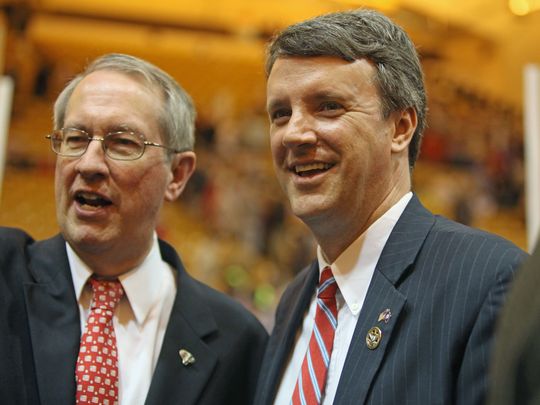 A resolution from the Staunton Republican Committee

Whereas, the Staunton Republican Committee is located wholly within the Sixth Congressional District; and

Whereas, the Sixth District Republican Committee and its former Chairman and Treasurers are subjects of two Federal Elections Commission complaints; and

Whereas, the FEC Complaints lodged against the Sixth District Committee appear to be frivolous, they are nonetheless very serious and need to be vigorously defended by proficient, experienced legal counsel; and

Whereas, no plan of action was presented by the current Sixth District Chair to defend these complaints for over a month after the Complaint filings; and

Whereas, neither the Sixth District Committee’s insurance plan, nor the Republican Party of Virginia’s insurance plan include coverage to provide defense of FEC Complaints; and

Whereas, the Sixth District Committee at its June 23rd meeting approved a motion appointing a Special Counsel to defend the Committee and its former officers in their official capacities and authorizing the payment of legal fees up to $30,000 and designated the Bopp Law Firm of Terre Haute, Indiana as the Special Counsel, and

Whereas, all members of the Sixth District Committee would prefer to fully dedicate their resources to supporting Ben Cline in his Sixth Congressional District race, and Corey Stewart in his Senate race, in the general election against the Democrat candidates, but it would be irresponsible, and detrimental to our primary cause of supporting candidates, for the Sixth District Committee to be unrepresented in an ongoing federal investigation; and

Whereas, the Sixth District’s State Central Committee representatives unanimously voted in favor of the motion; now, therefore be it

RESOLVED, that the Staunton Republican Committee hereby affirms the above-stated motion; and, be it also

RESOLVED, that the Staunton Republican Committee looks forward to a thorough and expeditious adjudication of the FEC complaints, so that the Sixth District Committee may once again fully commit its resources to supporting Republican candidates; and, therefore, be it also

A resolution from the Staunton Republican Committee was last modified: August 29th, 2018 by Jeanine Martin

Well hell, why not support the BS? It’s not like Staunton is a GOP strong hold or anything. Northam cleaned Ed’s clock in Staunton, as well as in most of the other cities in the 6th. So why should this November’s election be any different? Why even bother going to meetings, if it’s all filled with BS? Life’s too short.

Can’t the legal liason for the 6th district just represent the district since he’s good at threatening everyone? Oh that’s right, he’s ain’t actually a licensed lawyer. What a great choice by the chair

Anybody on this unit committee directly or indirectly benefitting from this legal largesse?

How many people voted for this resolution? How many against?

I’d like a list of all the people on the 6th committee that voted in favor of looting the 6th district for this $30,000 hostage — or is that a secret too?

Surely the 6th has a well qualified legal liason that can handle this.

So a handful of Stauntonites? Is it safe to assume that they are not big donors to the 6th? How much of the treasury came from that neighborhood?

And no list available of the 6th frivolous party spenders? I sure would like to play connect the dots — but I can see why they would want to lie low.

Why not post all of the recent resolutions by the various County Republican committees?

Most (emphasis on most) people here read well enough to form an intelligent opinion if provided with both sides of a topic.

It would be refreshing if somewhere would do so without feeling the need to sway the opinion by selective omission.

However, I do question whether it is necessary to take $30,000 of scarce funds NOW to pay a law firm. It sounds from what I heard in the past that the FEC was not necessarily going to DO anything for months or a year. So I would think that a law firm should be able to take $5,000 now and see what happens. I would certainly take the case as a lawyer for $5,000 and my bill would probably never go above $7,500 to $10,000 no matter how far the case got. If a company had sufficent funds, I think a $30,000 retainer fee is perfectly appropriate. But a non-profit organization like the GOP unit with limited funds during an election, well, maybe that is a different story.

Unfortunately, any legal complaint or lawsuit is serious if it is not ANSWERED effectively. Even a frivolous legal proceeding can win if one does not answer it and respond effectively.