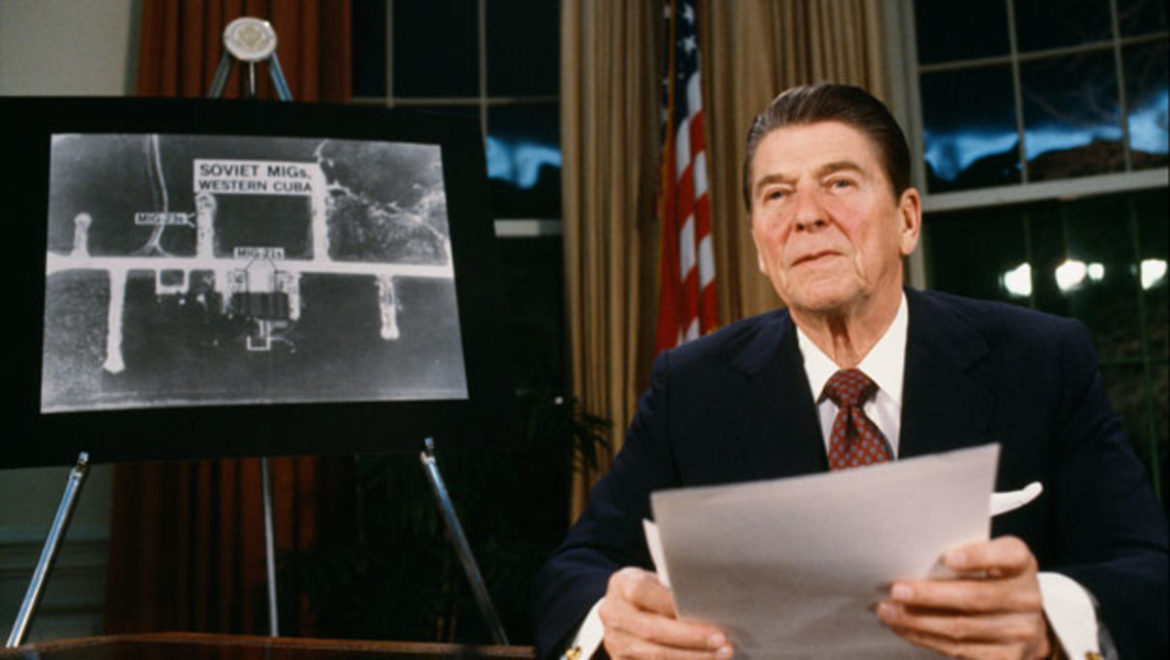 A Tale of Two Presidents

Thirty years ago, while a student at the Senior U.S. Army War College in Carlisle PA my fellow classmates and I witnessed an incredible phenomenon. The once feared â€œBearâ€ of the  Soviet Union which we had trained all of our respective careers to engage and to defeat on the land, sea, and air imploded in front of our very eyes. The once all powerful and feared â€œEvil Empireâ€ was no more.

As many of you may recall, this did not come about by accident but rather through the determination and strong resolve of then President Ronald Reagan. Before President Reagan no other U.S. President had openly declared a stated policy of victory over the Soviet Union.

Upon assuming office Reagan knew that rather than appease the Soviet Union as many of his predecessors had done, tyrants only respect power be it perceived or actual. Reagan set about to break the Soviet Union primarily through his vison of the implementation of Strategic Defense Initiative (SDI), an anti-ballistic missile program that was designed to shoot down Soviet nuclear missiles in space. Otherwise known as â€œStar Wars,â€ SDI technology sought to create a space-based shield that would render nuclear missiles obsolete.

On March 23, 1983, President Reagan announced the SDI program in a television address broadcast nationally. â€œWhat if free people could live secure in the knowledge that their security did not rest upon the threat of instant U.S. retaliation to deter a Soviet attack, that we could intercept and destroy strategic ballistic missiles before they reached our own soil or that of our allies?â€ he said. â€œI call upon the scientific community in our country, those who gave us nuclear weapons, to turn their great talents now to the cause of mankind and world peace, to give us the means of rendering these nuclear weapons impotent and obsolete.â€

The Strategic Defense Initiative was ultimately most effective not as an anti-ballistic missile defense system, but rather as a propaganda tool that put intense military and economic pressure on the Soviet Union to fund their own anti-ballistic missile system. This strategy was proved to be effective because, during the 1980s,Â the Soviet economy was teetering on the brink of disaster.Â

At the time American scientists were not even sure if SDI technology could be developed, and an operational system could ever be deployed. But, despite repeated attempts by the Soviets in subsequent arms control negotiations to block SDI Reagan stood firm and despite repeated pressure from even his own advisors, he did not back down. Although this may not have been the sole factor that led up to the downfall of the U.S.S.R. the message was clear â€“ the United States would no longer appease our potential adversaries.

More than any other strategy, his unwavering commitment to SDI convinced the Soviets that they could never win an arms race and forced Gorbachev to end the Cold War peacefully at the bargaining table and not on the battlefield.

Compare this moment in history thirty years ago to what is taking place today on the international stage, President Vladimir Putin recently called the dissolution of the Soviet Union â€œthe greatest geopolitical catastrophe of the century.â€ It, therefore, comes as no surprise that he now seems to be on the verge ofÂ re-invading Ukraine. Meanwhile, President Xi of China has openly stated he plans to unify China through the seizure of Taiwan as part of the PRCâ€™s long plan to achieve hegemony.Â

Rather than appease them or send humanitarian supplies when the invasion ultimately occurs as did President Obama,  letâ€™s take a lesson from the playbook of Ronald Reagan thirty years ago. Tyrants only respect one thing and that is raw power either the threat or its swift application. As we saw recently in Syria, once a red line is crossed without consequences threats are merely idle words.

While the Cold War may have ended, the fight for freedom is never over. It is a never-ending battle not for the faint of heart that must be waged year after year, generation after generation. President Biden, let us not be forced to relearn the hard lessons of the past by those in power who would rather appease than stand up to international bullies such as Russia and China. As Thomas Jefferson stated, â€œEternal Vigilance is the price of liberty.â€