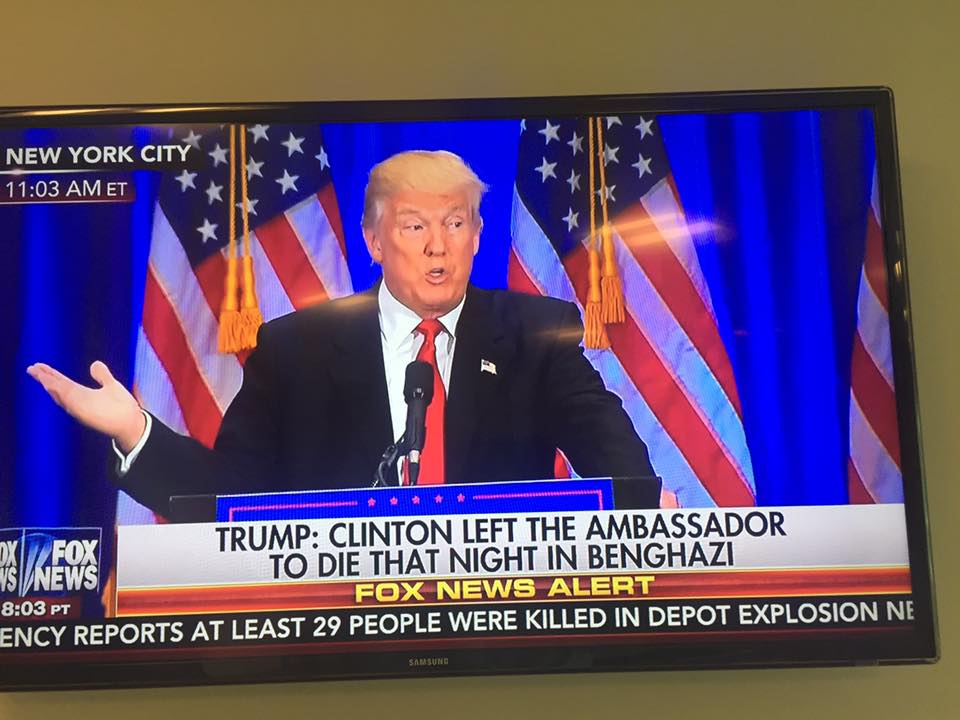 A Tale of Two speeches—Trump and Hillary

Trump gave a great speech today, the full transcript is here.  Read it. His speech included:

“It’s rigged by big donors who want to keep down wages.

It’s rigged by big businesses who want to leave our country, fire our workers, and sell their products back into the U.S. with absolutely no consequences for them.

It’s rigged by bureaucrats who are trapping kids in failing schools.

It’s rigged against you, the American people……

Here is my promise to the American voter:

If I am elected President, I will end the special interest monopoly in Washington, D.C.

Hillary Clinton has perfected the politics of personal profit and theft.

She ran the State Department like her own personal hedge fund – doing favors for oppressive regimes, and many others, in exchange for cash.

Then, when she left, she made $21.6 million giving speeches to Wall Street banks and other special interests – in less than 2 years – secret speeches that she does not want to reveal to the public.

Together, she and Bill made $153 million giving speeches to lobbyists, CEOs, and foreign governments in the years since 2001.

They totally own her, and that will never change.

The choice in this election is a choice between taking our government back from the special interests, or surrendering our last scrap of independence to their total and complete control.”

The whole speech is well worth a read. It’s an very good.

Hillary was quick to respond with gems such as this:

“”People are working harder and longer just to keep their heads above water.  And to deal with the costs, the everyday costs, the costs of basics like childcare and prescription drugs that are too high.  College is getting more expensive every day.  And wages are still too low and inequality is too great.  Good jobs in this country are still too hard to come by.”

Remind me, where has she been the last 8 years?  Wasn’t she a part of the Obama administration?  They had 8 years to fix the economy.  Hillary says Trump hates women.  Remind me again, what has the Obama administration done for women?  Single women have faced big declines in income under Obama.  Is Hillary saying Childcare workers make too much money?  College keeps getting more expensive because the federal government subsidizes it!

Hillary slammed Trump for not understanding the new economy and job creation, which is also a bold claim since Donald Trump is a highly successful businessman who actually has created thousands of jobs, while Hillary has gotten rich off of… politics.  ‎

Hillary’s attacks on Trump were a subterfuge to deflect attention from the most remarkable part of her rant. What was billed as a “major economic speech” was entirely bereft of new ideas. In fact, it was vacant of ANY ideas at all about how to help the economy.  The left’s idea cupboard is entirely empty.

Her policy solutions to helping the middle class were raise the minimum wage, tax the rich, and spend more on infrastructure. Gee, where have we seen this before? Oh yes, this is Obamanomics Part Deux.

The class warfare theme ran throughout the speech, and yet this presents Hillary with another uncomfortable problem. Obama has raised the minimum wage, he already did spent $830 billion on infrastructure stimulus spending, and he ‎has taxed the bejesus out of the rich. And the result wasn’t more equality and a resurgent middle class, but an angry and worried worker class that hasn’t seen a pay raise in 15 years and with household incomes in the last seven years that have fallen behind inflation.   Some 95 million Americans aren’t working and the poverty rate is still hellishly high.

The Obama administration had no real solutions for any of this and neither does Hillary.

A Tale of Two speeches—Trump and Hillary was last modified: June 22nd, 2016 by Jeanine Martin

I’m glad Trump gave a good cogent speech. However, it should have have to be the case that the fact he has given an adult speech is newsworthy.

It isn’t about Trump’s speaking skills. It’s about his willingness to confront his opponent, speak the truth, and fight to win this election. We haven’t seen a Republican presidential candidate fight like this in a very long time.

Trump’s speech reminds me very much of Reagan’s Liberty State Park speech in which he absolutely blistered Carter near the start of the 1980 campaign. He says “I look forward to meeting Mr. Carter in debate, confronting him with the whole sorry record of his Administration”, and he blasts him left and right. Everybody remembers Reagan as a very nice guy, which he was, but they forget the way he could eviscerate his liberal opponent in direct confrontation. He didn’t win on just flowery hopeful speech alone. He also smashed his opponents head on. And he never talked like today’s pantywaist Republicans do about ‘getting things done’ with compromise and all that other vague bs.

It’s worth your time to look up that speech and see again what we have missed since then.

Go back to your NeverTrump crap… What does your blather matter, he isn’t going to win. Hillary has the demographics as does any Democrat for the next century… You GOPe dopes have sealed your fate. Enjoy your high taxes to pay for never ending illegal immigration and its poverty and chain poverty coming over the border which you guys supported with those F..ing Bushes and McCains and Grahams and Ryans.

Well, if you put it that way, it sounds awful. And it has been awful.

I am not sure that Trump is always willing to confront opponents. Remember how he chickened out on Megyn Kelly for awhile? He would rather call names than make intelligent points, mainly because he does not have the depth on the facts. He’s been a Democrat most of his life (and depending on whom you believe he may still be), so what do you expect?

As for me, I am NOT in the “Never Trump” camp, though it is clear that he is still a terrible candidate.

At least the Bushes and McCains and Grahams and Ryans understand how foreign policy and taxes work! Trump has shown little aptitude in these areas. However, if you get your jollies off being angry like Mr. Trump, go right ahead. If Trump loses, though, don’t blame those if us who warned you.

NPR actually got it right for this speech…. “Trump Just Gave The Speech Republicans Have Been Waiting 20 Years To Hear”.

An illegal alien attempted to take a gun away from a law enforcement officer to assasinate Donald Trump at a Trump Campaign rally this week. Why is the GOP in Washington OBTUSE to Trump’s populist message resonating with voters that America must control its borders, build a wall on the Mexican border, and implement a reasonable policy to vett immigrants coming to this country to insure the safety of its citizens?

At this point we need to ask why these jerks are still in office and we need to work hard to get them out. That is why I am phone banking for Paul Nehlen and have donated to Kelli Martin in Az. Get rid of the greedy, globalist traitors.

And why is it that there is virtually no information on what this illegal alien was doing for the past year. Obviously, the media is refusing to ask a few salient questions among which are – is there any connection to Muslim terrorism. He had enough resources to crisscross the country, purchase a gun to train with, visit San Bernardino where the previous terrorist attack occurred, and was prepared to die to kill Trump.