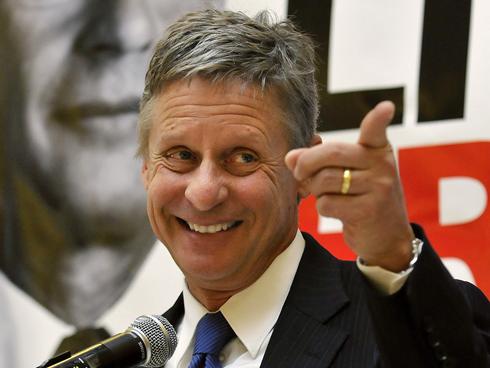 I’m not naive about this, and understand how fruitless third party efforts can be given that I voted third party in 2012.

Donald Trump’s victory in the GOP Republican primary has ripped apart the GOP, and most of the anger centers among tea party conservatives aghast that such a ghoulish man could take the mantle of Reagan. We see it from intellectual outlets like National Review as well as young political thinkers like Senator Ben Sasse of Nebraska, who is using his genuine #NeverTrump beliefs to elevate himself within the GOP.

While it’s nice that so many are this upset, sadly our constricting political system forces us to choose between two parties whether we like it or not. It was frankly liberating in 2012 to vote for Gary Johnson, who actually fit my belief system the best rather than Democrat Barack Obama and kind-of Republican Mitt Romney.

Since I voted for Johnson last time, I actually have some insight into him that others might not. In New Mexico, he turned a handy-man store into one of the largest companies in the state, and turned that fortune into a run for Governor in the big Republican Revolution year in 1994. He was reelected easily in 1998 where he became best known for his advocacy for drug decriminalization. Part of this effort stemmed from a nasty back injury he sustained, the pain from which he dealt with through marijuana.

Johnson was always an outsider in New Mexico, even as Governor, and vetoed hundreds of bills. He was a classic tax-cut Governor who didn’t seem to enjoy talking about social issues. Gary Johnson also isn’t really a Libertarian. He’s not Ron Paul running around talking about the gold standard, Bastiat, Hayek and Murray Rothbard. He developed a political message based on limited government and social acceptance.

This will be Johnson’s biggest hurdle to jump if he wants to win #NeverTrump Republicans. Gary Johnson is pro-choice, pro-gay marriage and pro-drug decriminalization. Between his two presidential runs he was the CEO of a publicly traded medical marijuana company. This will be a hard pill for a lot of devout social conservatives to swallow, much harder than economic conservatives whose main problems with Trump are that he has no plans of creating a smaller government.

Johnson is also a noninterventionist, like Ron Paul … he tried to make hay of Rand Paul’s presidential failure by reaching out to his supporters (such that he had). He can point to his record as a two-term Republican governor of a blue state in New Mexico and show conservatives that he can govern, but I’m sure many conservatives would worry about what kind of judges he would appoint, for instance.

His second biggest hurdle is the Libertarian Party itself. I watch from afar and it is not the healthiest nor the most rational group. There is a large clique that hates that it keeps nominating former Republican politicians (Bob Barr was the LP presidential nominee in 2008, Ron Paul in 1988). Currently, former software magnate John McAfee and click-bait website editor Austin Peterson are running. Knowing the LP, McAfee and his vast software fortune could easily win this nomination and foil whatever chance the LP might have to grow its brand. But Johnson has stuck with the party since he joined in 2012, and with Trump and Clinton as the major party nominees, it would be foolish not to see the chance at a real opening here.

The other factor at play here is what is going on within the Democratic Party. It’s not wrong to say that Trump and Bernie Sanders are appealing to the same emotions within their respective parties, even if they have different substantive manifestations.  It is beyond amazing that Sanders won Indiana, given the Clinton inevitability narrative adopted by both the media and the general population.

If you look at the breakdown of delegates (without the super-delegates), Sanders is close pretty close. I saw a poll today that said one in four Sanders supporters won’t vote for Hillary, and based on my own anecdotal evidence, I believe that. There is something boiling under the surface in the Democratic Party right now that is being kept quiet because Barack Obama is so popular, but it won’t take long to explode to the surface. Gary Johnson’s “live and let live” social philosophy might be appealing to Sanders supporters as well. In fact, I would argue that Johnson might even be more attractive to younger Democratic voters who supported Sanders because he has the social views that he does, particularly on gay marriage.

Allow me this as well: Gary Johnson will not be President of the United States. I am under no illusions about this. I am not sitting here trying to convince you that we can save the country from Trump by supporting Johnson and installing him in the White House.

What he can do is finally offer the country a third way, a message that you don’t have to be force-fed just two flavors of politics, especially ones that are so old and busted. This could be a way for Americans to finally breathe in their politics, to show the two parties that nominating such low characters is not what our Founders envisioned for leadership in this country. More than likely he would split enough of the vote to elect Hillary Clinton president, something that will probably happen anyway.

Standing up for conservatism doesn’t mean we have to always stand up for the Republican Party. This could be Gary Johnson’s moment to open up our party politics and to break the centuries-long practice of forced political support because the two major parties are glorified federal departments.

The absolute most important thing for Johnson to accomplish in 2016 is to somehow get into the debates. The debates are the mechanism used by both parties to shut out any competition, as so many Americans don’t even begin to tune into presidential races until then. They are vitally important. Currently there is a lawsuit floating around the courts about the debate commission’s rules regarding third parties, so that would be something to keep an eye on. But all this talk about disaffected Trump and Sanders voters means nothing if Johnson cannot somehow get himself before the American people on a stage that puts him on equal footing with Trump and Clinton.

Perhaps this is all just hot air and the Republicans will come home to Trump in October, and the LP gets it’s customary 1%. But we might be looking at a replay of the 2013 Virginia gubernatorial election. Robert Sarvis captured 6% of the vote just because people did not like the choices they were given. That frustration could drive Johnson and make this election very unpredictable.

PS – If Johnson were smart he’d offer his VP slot to Ben Sasse. Won’t happen, but that’s just me.