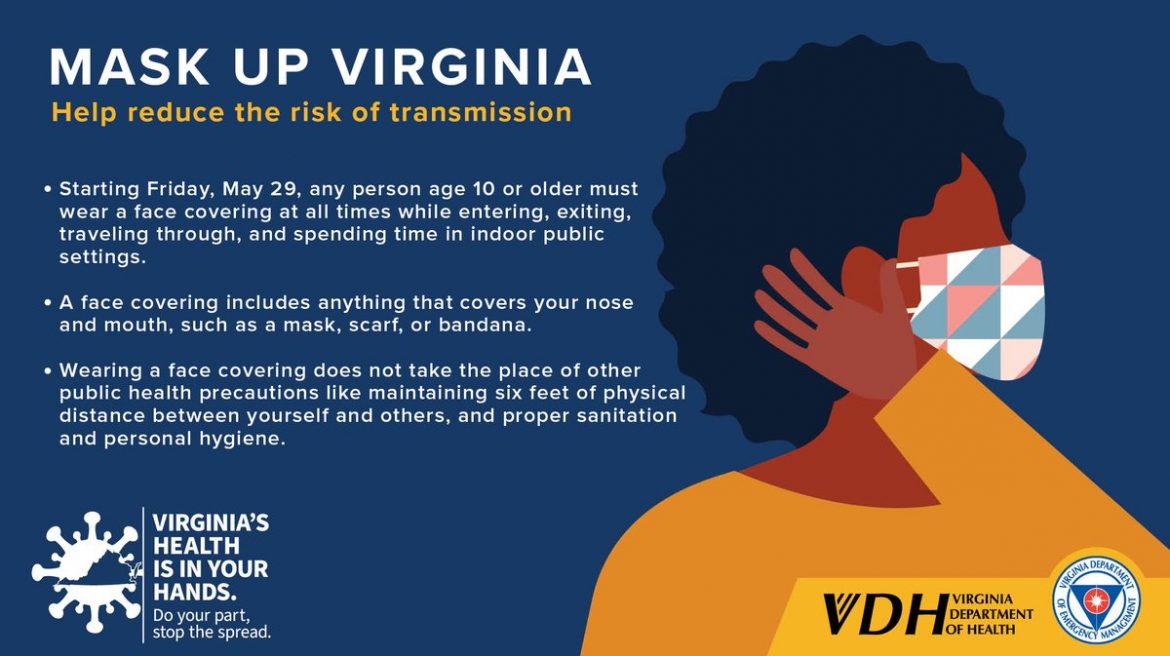 Like everything else he’s done during the coronavirus crisis, Gov. Ralph Northam’s announcement that he was ordering masks for all Virginians over the age of 10 when they’re in brick and mortar establishments was onerous to businesses and fraught with contradictions.

For instance, he warned about the mask mandate on Friday, May 22 , announced it on Tuesday and it goes into effect tomorrow.

If masks are such a critical tool to control the spread of the virus – and there are experts who disagree– why did Northam wait more than two months after declaring a health emergency to issue his order?

Then there’s the matter of enforcement.

At his presser, Northam said police would not be enforcing the executive order. Instead, face mask enforcement would be the responsibility of businesses that will face stiff penalties from the health department if they don’t knuckle under.

That means the minimum wage cart corraler at the supermarket or the Walmart greeter will have to block the unmasked, some of whom may be a tad irritable after two months of unemployment and lockdowns.

What could possibly go wrong?

Of course, Northam couldn’t ask law enforcement to arrest people violating the mask order, because it’s unlikely they’d cooperate. That would have been humiliating for the governor, so he simply pointed his finger at business owners and told them to deal with it. According to the Richmond Times-Dispatch:

The Virginia Association of Chiefs of Police earlier Tuesday “strongly” opposed a face mask requirement, arguing that it could force businesses to enforce it, potentially exposing them to dangerous encounters.

The police chiefs association said the order turns “good advice into a mandate” that will be enforced with trespassing citations and by physically removing violaters from businesses.

The group argued it “destroys police/community relations and puts business owners in a no-win situation: either be prepared to confront people you value as customers, or avoid the risk of a potentially violent confrontation by keeping your business closed.”

As if business owners don’t have problems enough, now they have to enforce an unpopular edict from the governor.

It’s also unclear just how long the mask mandate will remain in effect. During his press conference Northam was vague, saying the order would be lifted as soon as it’s safe.

Moments later, however, Northam noted that the General Assembly would convene a special session in either July or August and he planned to ask lawmakers then to decide on a penalty for violators.

The governor clearly expects his masking requirement to stretch into the long, hot summer. And beyond.

Northam also declared that face coverings would be required indoors in restaurants unless customers were eating or drinking.

He seemed to forget that indoor dining is banned in Virginia. Then again, he may have been providing a scintilla of hope that the commonwealth is about to enter Phase 2, with restaurants permitted to open indoor dining at 50 percent capacity.

The governor will have to forgive folks for being conflicted about masks. This is not Asia. Mask wearing is foreign to our North American culture and not something most of us are eager to adopt.

Plus, the messaging has been confusing and contradictory.

For instance, on March 8th, the vaunted Dr. Anthony Fauci went on “60 Minutes” and said, “People should not be wearing masks, “ adding that ordinary masks are not effective in protecting against the virus and that they have “unintended consequences” like people touching their faces MORE to adjust their masks.

But 26 days later, Fauci did an about-face, urging Americans to cover their faces. This week, Fauci said he wears a mask as a “symbol” of what “we should be doing.”

On top of that, the governor noted that the face coverings need not be medical grade. They can be just a thin piece of cotton and a rubber band. Gauze, perhaps?

From my limited observations, many people in Virginia Beach are wearing masks when they’re shopping. Some are not. This mandate, however, rankles because of its authoritarian tone. The new rule also lards yet another task on businesses that are already struggling to reopen under some of the state’s crushing Covid-19 regulations.

Worse, it makes the Resort City a less-attractive destination for tourists on the East Coast. Beachgoers can travel south to North or South Carolina and find beautiful beaches where they won’t have to put on a mask to run into the 7-Eleven for a Slurpee or to dine in a restaurant whenever the governor deems it safe to allow that.

Given Northam’s embarrassing day on the Virginia Beach boardwalk last weekend, where he ignored all rules of social distancing, humility might have led him to simply urge Virginians to wear masks, without making them mandatory.

But that isn’t this governor’s style.

About That Mask Mandate… was last modified: May 28th, 2020 by Guest Contributor Kerry Dougherty