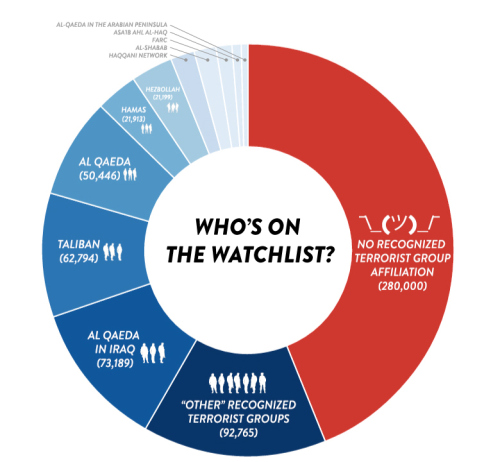 Many of the more anti-gun Presidential candidates, including Hillary Clinton, Bernie Sanders, Martin O’Malley, Chris Christie, Donald Trump (despite his claims to be ‘very strong into the whole thing with Second Amendment’), and John Kasich, have come out in support of legislation depriving anyone on the ‘no fly list’ of their Second Amendment rights. Kasich’s supporters here in Virginia even cast it as the ‘common sense approach’, and one of the chief contributors to TBE’s moderate Republican counterpart defended him, positing that there is due process involved with said list. I hear he has a law degree.
To be blunt, this is rank nonsense. There is NO semblance of due process involved when it comes to the no-fly list. To advocate depriving Americans of a basic, Constitutionally-protected, civil right on the basis of the subjective judgements of unelected bureaucrats is nauseating. I always thought that ‘due process’ involved at least seeing the evidence against you. Apparently, the entire Democratic field, along with the more statist Republican candidates, don’t think so.
Thankfully, the rest of the Republican field rejects this idea. Even national security blanket-hugger Marco Rubio, whose major flaw is his eagerness to please the more hawkish elements of the Republican party by committing the United States to ever more third world conflicts if elected and to trade liberty for security, recognizes what a horrible idea this is. Our new Speaker of the House, Paul Ryan, also rejected it.
The no-fly list, includes a huge number of Americans with no apparent ties to any terrorist group of any kind, as indicated by the graph below (H/T: The Intercept): 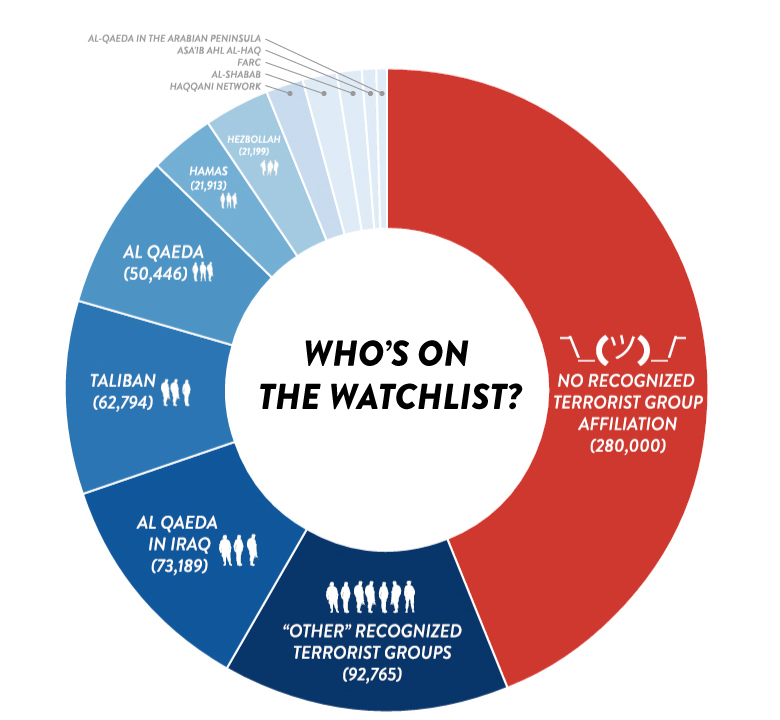 The firestorm over Trump’s proposal to ban all Muslim immigration to the United States (at least temporarily) has put this issue on the back burner the past few days, but make no mistake: It indicates who has respect for the Constitution, and who does not. No candidate who advances this concept deserves conservative support.

Funny how you will support banning an entire religion without due process but when it comes to guns, you change your tune

Who said they would support ‘banning an entire religion?’

Your hero, Trump, and so many in the GOP. Just take a look at the article Jeanine linked to on this site.

This is literally the most ridiculous assertion ever. I trashed Trump in THIS ARTICLE. Needless to say (or is it, given your comments here) I do not support Trump.

The U.S. Constitution only applies to U.S. citizens. People coming into the country have no constitutional rights. They have the rights accorded to them by their country’s constitution in jurisdictions under that country’s sovereignty. If we say we will only admit people wearing pink shoes and who love peanut butter, then those are the only people that can visit the US of A.

You do understand the difference between the rights of US citizens and immigration policy, right?

Not a single terrorist nor any homeland sympathiser that has been “involved” in an actual act of terror on US soil has been on the no-fly list. NOT ONE. The vast majority of those individuals that have actually conducted terror operations on US soil have indeed flown into and out of Islamic states, many supporting active terrorist cells, on countless occasions prior to their acts. In the recent Paris attack at least one and possibly two of the participants carried undetectable false Syrian passports that they used to move freely in the EU and would have provided them unchallenged access through customs to the US. These were undetectable due to the fact that ISIS has “liberated” actual passport manufacturing machines from Syrian occupied territories and are in effect creating there own passport documents. The appropriate nomenclature for this mess is the “illusion of security”, unless you consider the President of Bolivia, former Sen. Edward Kennedy, Rep. John Lewis, infants, US military veterans or the dead 9/11 hijackers all at one time on the list a useful document and some type of deterrent. The FBI’s terrorist screening center has maintained the list from the beginning where approximately 16,000 people, fewer than 500 of them Americans, were placed on the no-fly list as of September 2011. A leaked report to the Intercept news media site revealed that as of August 2013, 47,000 people were included, comprising about 800 Americans. Today the numbers are thought likely to be higher (700,000 names according to one estimate), but the FBI has declined to comment after countless embarrassing incidents regarding who was actually on the list and who was clearly not. It seems the whole effort was hastily assembled and never properly scrubbed for reality. Like all “big government” programs instead of creating a very small but manageable list of people with the means, motive and opportunity to create havoc with travel the enlighten federal bureaucrats have spawned a list industry designed and staffed by a fleet of steam rollers to crack a single nut. To employ this useless list as a justification to remove 2nd Amendment rights from citizens is not only massively unconstitutional but just the crazy topping slapped on Obama’s lunacy cake called the no-fly list that he claims is somehow protecting the American people from terrorist actions. I have a much better short term solution – buy a weapon or perhaps several and fight to keep them.

Jeb Bush sounded iffy on this topic, he was on Special Report on 12/4 – here is the transcript of the discussion on the no fly list http://www.foxnews.com/transcript/2015/12/04/jeb-bush-on-california-rampage-common-core-gop-infighting-legacy/:

TUMULTY: If we could go back to topic A among Democrats now after San Bernardino, gun control, what about the specific proposal that the president was talking about in the tape that we saw earlier? Do you think that if somebody’s name is on a no-fly list that they should be able to get a gun?

BUSH: If that no-fly list is a concise list, yes, I think that that would be an appropriate qualifier.

BAIER: We should point out that you’re sitting next to someone who was on the no-fly list.

HAYES: So I wouldn’t be able to get a gun.

HAYES: There’s no due process in me not being able to get a gun.

He’s not defending anyone, he opened his mouth and inserted his foot then after someone mentioned that Hayes was on the no fly list he tried to turn it around. Someone needs to get some answers from Jeb on this – his answer did not sit well with me.

“There is NO semblance of due process involved when it comes to the no-fly list”
Exactly. You can’t be deprived of a right unless you’ve been convicted of something.
Equally as alarming is that there are over half a million people on the no-fly list.

You act as if the Constitution is the supreme law of the land. The whole thing or can you just cherry-pick the sections you like?

You’re being suckered by playing the no fly-no buy game of der Leader. Once he gets the power to deny any guns to any people, that club gets a lot bigger.

The gun thing is a misdirection away from barbarians at the gate.

Donald Trump did NOT come flat out and say he supports it; he said, “I’d certainly take a look at” restricting people on the No-fly list from being able to purchase guns. Big difference. I am a Conservative and an avid Trump supporter – one of many multiple-millions BTW – and I’m sure once he does look into he’ll quickly reject it. Here’s his position on guns/2nd Amendment Right; read it for yourself- you’ll see Trump is very bullish on this God-given right – https://www.donaldjtrump.com/positions/second-amendment-rights

Trump never comes out with anything definitive. His only response to any question is we will look at it or we will use good management.
Oh by the way, are you serious that owning guns is a God-given right? Are you sure this right is not man-made?

Trump did come right out and support banning certain guns several years back. I think he says whatever is rattling around in his brain at the time.