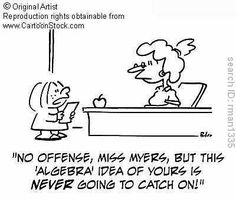 A few weeks ago I published a semi-satirical article in this column which related my personal experiences with math-education in the 1950s. (“Surviving Math’s Dark Age”1) Perhaps my observations had some influence on actual events, as news reports have recently revealed recommendations from the Virginia Mathematics Pathways Initiative (VMPI) to level the math playing-field by eliminating all advanced placement math classes before the eleventh grade, in Virginia public schools. The Virginia Department of Education has described the VMPI as its “partner to consider how to modernize and update math instruction” in the state.

However well-intentioned the VMPI’s recommendations might have been, the reports produced a furious response from Virginia parents, including Pamela Fox, a lawyer and mother of four who is outspoken about Fairfax County public school policy. She points out that under the VMPI plan all students in a given grade would be required to take the same math class, regardless of ability. The regimen would apply through the 10th grade of high school. There would be no classes for struggling students needing remedial help or for advanced students seeking accelerated math.”

These critical reactions caused the VA DOE to back away from the VMPI plan. Virginia State Superintendent of Public Instruction James F. Lane, insists that the state has no plans to eliminate math-tracking (i.e., separate classes for students at different levels) in kindergarten through the 10th grade. Nevertheless, the proposal is out there, and parents have been put on alert. So this particular “toothpaste” of equal math-ignorance will be difficult to put back in the tube.

In my previous article I joked about high student self-esteem, coupled with low math-understanding, but the situation is really not very funny. Mathematical illiteracy in current American society is discouragingly widespread. The problem goes very deep – perhaps more deeply into the education hierarchy than we have realized. Educators try to achieve politically correct “equity” by bringing the math-achievement levels of all students down to the same level, while soft-pedaling the bad news about those low achievement levels to protect their “psyches.” This is the happening thing in education today. But it is not new.

When we lived in New Jersey in the late 1990s, a revealing news article was printed in the Asbury Park Press. It captured an interview with the top mathematics education official for the state. (We’ll call him Dr. Ramon.) The good doctor made it clear that he wanted to eliminate the proof-based teaching of geometry and other higher mathematics in NJ public schools. He said this style of teaching had “alienated” far too many students, and he detailed his own vision for the “intuitive” teaching of math in order to be more “inclusive.” Citing statistics showing that only 20% of students chose to study math at the high school level, he declared his intention to “reach out” to the other 80% with a more “user-friendly” approach.

Dr. Ramon’s approach might sound reasonable to many, but it is actually deeply flawed. Indeed, a clearer synopsis of the problems facing the country with respect to mathematics education would be difficult to find. Fundamentally, the flaw is that you do not make people better-educated in a difficult discipline by dumbing it down. Not, that is, unless your goal is to give all students just a little proficiency, but no one very much proficiency. (Voila! “Achievement equity.”)

Nor can mathematics be taught “intuitively,” despite Dr. Ramon’s advocacy. Once you get beyond problems solvable by counting fingers and toes, mathematics is counterintuitive. The genius of the entire discipline, in fact, is that it enables the comprehension of complex, counterintuitive concepts by means of systematic, symbolic representation, under the rigor of proof. One grasps foundational axioms, proposes new “truth” – i.e., postulates – and establishes the truth of those postulates by means of logical proof.

This is the very foundation of the scientific method, and it is not elective. Barring divine revelation, there is no alternative to it. Without “proof,” the teaching of mathematics becomes nothing more than the conveyance of a set of seemingly random, unconnected “facts” – and arguable facts at that. Indeed, modern “fuzzy math” texts have already moved into feelings-based teaching of math: e.g., “Four birds were in a tree. Three flew away. How do you think the remaining bird felt?” (Actual question from a math textbook.) And out in today’s public square, “Woke” educators are denouncing mathematics as a “racist, white-supremacist construct” that must go.

But the application of proof is not limited to mathematics or science. Proof is the essential tool of all higher learning. It is the fundamental way that ideas are established – the absolute foundation of critical thinking. Without proof, everything is just “opinion,” and your opinion is no worthier than mine. (Sound familiar?) I am appalled that an educator of Dr. Ramon’s stature apparently did not comprehend these matters.

Of course, it’s possible that he did comprehend them, but felt political pressure to do the impossible – i.e., make a difficult discipline seem easier and more “friendly,” while boosting student achievement levels. In other words, let’s make it seem that we are teaching our students mathematics. We won’t really be doing so, but the truth will show up only on those international comparisons of student achievement. (Blast those pesky foreigners!) And with the complicity of the liberal media and the teachers’ unions, those achievement tests can be denounced as irrelevant, racist, elitist or “destructive of children’s tender psyches.”

Modern American educators have figured out that you don’t win popularity by handing out honest grades. When everybody gets an “A,” you have happy parents and happy students, with days of reckoning far off in the future. I don’t grade all educators with “F” on this, but obviously there are too many today – some at very high levels – who deserve it.

Educators willing to dumb-down difficult subjects like math are also popular with political activists who want a large population with diminished capacity for analytical thought – people who all think alike and are easily led. These are voters who have no idea that it would take you 2,738 years to spend a trillion dollars, if you could spend a million a day. We need more voters who gasp when a trillion dollars is mentioned, and who don’t just shrug and ask, “Where’s mine?”

Somehow, we need to get back to teaching real math. If we fool around much longer, there won’t be anyone left who knows what that was. Old farts like me can’t live forever.