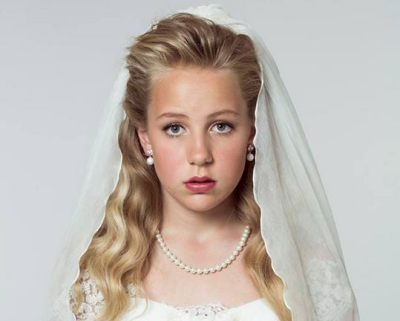 Thanks to State Senator and candidate for Lieutenant Governor, Jill Vogel, adolescent children in Virginia who previously had no legal protection against coerced marriages, usually as a result of a pregnancy, are now protected by State law. Senator Vogel pushed through legislation making it illegal for children to get married, except in cases where sixteen and seventeen year olds had been legally emancipated.

It is surprising that such a law was just passed in 2016. As recently as 2015, adolescent children have been getting married in Virginia. Often times, these marriages were between adolescent girls and men over the age of twenty-one.

According to the law in Virginia up until last Friday, it was legal for children under the age of 18 to get married, and worse: 12 or 13-year-old girls could become wed if they were pregnant and gained parental consent. Unthinkable.

And shockingly, people were actually utilising the law. Figures show that between 2004 and 2013, 4,500 children under 18 were married, and of those 200 were younger than 15-years-old. 90% of those marrying underage were girls, and in most cases they married men age 21 or older. –Cosmopolitan

However, there are those who make the argument that preventing adolescent marriages is an infringement of civil liberties and that the State should not be deciding who can and cannot get married on the arbitrary basis of age, so long as there is “consent” from both the adolescent and their parents. This argument raises a number of issues regarding age and the arbitrary application of rights and privileges.

Should the State have the authority to determine when a citizen should have the right to drink, drive, or get married. Upon what objective principles do we justify letting children drive at 16, but not get married, smoke cigarettes, or serve in the military until the age of 18? What possible reason could the State have to allow men and women to serve in the military at 18, but not legally purchase alcohol until the age of 21?

This topic fascinates me because it pits pragmatic common sense against ideological or philosophical principles and demonstrates the absurdity of approaching government ideologically. There must be some arbitrary standards set by local, state, and federal governments. This is terribly troubling to those of us who try to make principled and objective political arguments that do not appeal to arbitrary rationalizations; but who in their right mind thinks a 13 year old girl should be allowed to get married to a 36 year old predator, even with her and her parents’ consent?

Senator Vogel’s law serves to protect thousands of girls from being coerced into marriages and nightmare situations that girls, at the ages of 13, 14, or 15 could not possibly appreciate or understand at such a young age. Such protections are an application of common sense and serve as a reminder that in the real world, absolutes and ideals regarding freedom cannot be liberally applied. This is yet another reason why I had to leave the Libertarian Party. Idealism, with regard to liberty, is a bulwark against common sense legislation and cultural stability. This is also a great annoyance to me, since inevitably in a Republic we are constantly drawing arbitrary lines which restrict our absolute liberty; and who is to say where those lines are to be drawn, but the majority?

For those who find themselves trapped by idealism and political absolutism, this issue presents what I believe to be an irreconcilable challenge to the idea of an objective and ideologically pure political philosophy. There is simply too great a need for common sense in government.

I know that in Mexico under some circumstances, the age of consent is 12, which many a gringo finds abominable. Perhaps this law is to prevent such a practice from gaining a foothold here.

So how many children will stop having sex underage because of a law or how many teenagers have we now criminalized? You know me so you know how er passionate I feel about protecting 12 or 13yos. But 17? 16? That’s been a pretty common age for teens for a few decades now and they are now criminals for it. I’m not sure that was a good idea. Although I do think something needs to be done to prevent the coercion. I dunno. This seems like it will catch more innocents in the net rather than solve the problem.

A 13 or 14 year old girl who is being coerced into marriage with an older man IS ALREADY in a hellish situation. Most likely she is already sexually active with the man and may be pregnant. That’s too bad. But so what? The government’s peventing her marriage is NOT going to stop her engaging in sexual intetcourse nor can it un-pregnate her. The government’s officious interference will do nothing except provide a paycheck to yet another buracrat performing another useless job.

And a better question is why concern ourselves with unfortunate but all but nonexistant quirky occurancess? Really, getting any kind of statistic on sex from the master sex-tittilate magazine, Cosmopolitan has got to be biased.

It’s easy to come up with these outlandish and extremely rare circumstances to justify more government intervention at the loss of individuals’ and families’ autonomy and rights.

Not everything IS the government’s business. There are plenty of other moral constraints around – neighborhoods and churches help uphold social norms. Peer pressure does a lot to uohold cultural modes.

Do children belong to the state or their parents? Does an adult own himself or does the governnent own him?

Relinquishing more of ALL of our liberty to the government is a more profound and dangerous evil than allowing one possible and extremely RARE irregularity to occur.

We really don’t need more government. We need less all over.

I’m always sympathetic to arguments for liberty, however I’m also 100% antagonistic toward acts of theft, force, and coercion. This bill protects adolescent girls from coercion by their parents or by older sexual predators. I appreciate Senator Vogel’s attempt to address these evils.

Furthermore, in the United States, we do not inherit full rights until we become legal adults, so this legislation does not in any way alter or harm any constitutional liberties or protections.

You still did not address who a child belongs to – the state or the parents?

… The government’s officious interference will do nothing except provide a
paycheck to yet another buracrat (sic) performing another useless job.

You’re a pathetic example of exactly what Tucker is talking about here. Sadly, I truly believe that you think that a Department Of Coerced Disgusting Marriages will be created just for this new law.

And you cross the line to repulsiveness when you marginalize these situations by using the word “unfortunate”. Neighborhoods, churches and peer pressure don’t do a damned thing with a 50-year old man gets his way with a 15-year old girl. Yeah, that’s the case that Vogel based that law on.

But you just go on ahead and stick with your litmus test on ideology. This is why you’re an outlier on the political spectrum. And the common sense spectrum, too.

I found her questions to be perfectly legitimate. No need to personally attack her for the points she brings up. They’re valid questions to consider. Consider this: 1 girl at 17 1/2 who went to school with an 18yo. They want to marry. He’s enlisted in the military. Now they can’t marry. As a mother considering my personal family and those that I know, I would say wait (I would say more but…). But we don’t know other people’s situations. Picking 13 is an extreme. How many underage marriages are coercion and how many are almost adults who can’t or won’t wait a few months? It is always right to questions broadstroke laws. So many one-size-fits-all laws and regulations ends up hurting a great deal of our citizens and our liberty. Always question and stop beating up those that do.

Oh, hell no. Sometimes you’ve just got to call people out for using their litmus-test political agenda when it flies in the face of common sense.