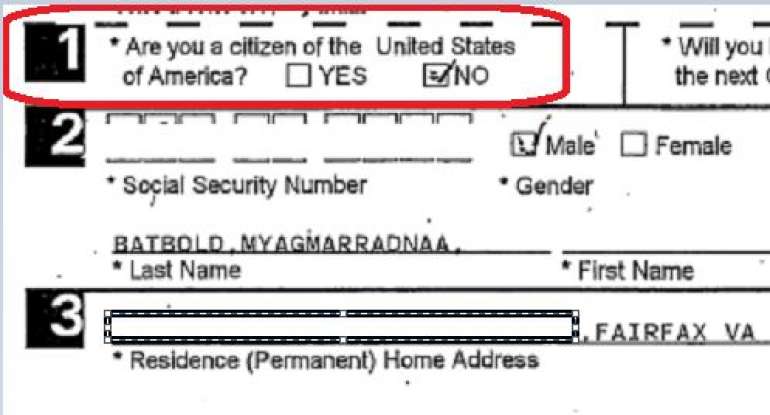 Alien Invasion: Thousands of Foreigners Registered to Vote (and Voting) in Virginia

Some inside the Beltway are in a froth about foreign influence in our elections.

Yet I’ll wager they won’t say a word about real foreign influence in elections — even when actual evidence exists.

A new report released today documents that in Virginia alone, 5,556 voter registrations were cancelled because of citizenship defects. Many of those cancelled had gotten on the voter rolls despite saying on their voter registration form that they were an alien and not eligible to vote.

Voter history records also show that many thousands of ballots were cast by registrants removed for citizenship defects.

Only Americans should be electing American leaders, but that isn’t happening.

Even worse, the report documents the extensive efforts by state and local election officials to conceal the extent of noncitizen registration and voting.

These efforts include internal emails which revealed an intent to alter public records to hide the full extent of noncitizen cancellations.

The report, entitled Alien Invasion II: The Sequel to the Discovery and Cover Up of Non-Citizen Registration and Voting in Virginia, notes that the 5,556 removed for citizenship defects in Virginia are only the tip of the iceberg. These 5,556 were only caught by accident after each told a state agency of his or her alien status after previously registering to vote. Had they never provided an inconsistent answer to citizenship status, they never would have been detected.

The report released by the Public Interest Legal Foundation, of which I am president, can be accessed here.

PILF originally asked in 2016 for election records demonstrating registrants removed from the voter rolls for citizenship defects. Under federal law, all list maintenance records are subject to public inspection. You would have thought election officials would be transparent and keen to comply with federal disclosure laws.

You would be wrong: it took three separate federal lawsuits — against Alexandria City, Manassas City, and Chesterfield County — filed by PILF to finally obtain the information.

Along the way, other election officials in internal email discussions obtained by PILF contemplated altering list maintenance records to conceal the extent of cancellations for citizenship status.

For example, Arlington County General Registrar Linda Lindberg, in an email obtained by PILF, contemplated providing an altered and shorter list of registrants removed for citizenship problems. Her email stated:

This group [PILF] has and will interpret the fact that there may be voting credit on the cancelled record as “illegal aliens” registering and voting, despite the voter having subsequently affirmed his citizenship. … I am going to delete or otherwise notate these names from my report, either by deleting the rows from the Excel version or marking them on the report.

Lindberg specifically contemplated hiding the full report of non-citizen cancellations from PILF and then producing an abbreviated list that excluded anyone on the list who subsequently cast a ballot regardless of the timing of any naturalization process. 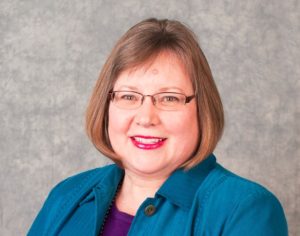 Federal law requires list maintenance records to be public, and does not entertain alteration of those records prior to release or the production of derivative records that conceal original removal data.

Some officials claim that the list of those cancelled for non-citizenship eventually affirmed citizenship or may have been citizens in the first place. Even that excuse — that the government was cancelling valid voters for citizenship defects — illustrates the mess that American voter rolls are in regarding aliens.

Without robust citizenship verification procedures at the front end, downstream failures occur in election administration. States like Virginia, which utilize no means to verify citizenship at registration, find themselves cancelling valid registrations occasionally if Lindberg’s story is to be believed.

Neither cancelling valid citizens nor registering aliens is good government.

Yet the PILF report demonstrates that hundreds of foreigners ended up on Virginia voter rolls even after telling Virginia election officials they were aliens on their voter registration form.

Consider Jiling Xiao. Xiao registered to vote during Barack Obama’s 2008 campaign for president. Indeed, the report notes that 2008 was the year with the highest rate of alien voting in Virginia. Xiao plainly marked “NO” to the question “Are you a citizen of the United States of America?”, yet was registered to vote. Such is the flimsy check used to prevent alien voting: 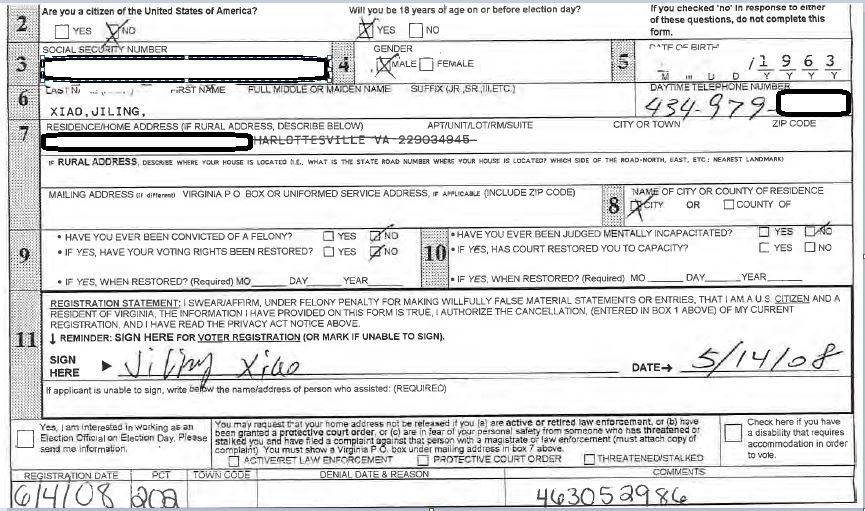 Or take Yun Ok Bae. Bae plainly answered “NO” to the citizenship checkbox question on the federal form, but was still registered to vote — and remained on the rolls for four years: 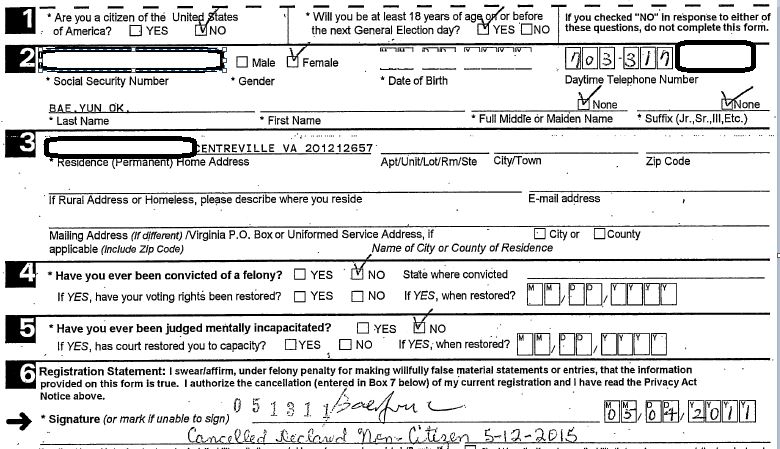 Juan Mones Cazon was registered to vote in Charlottesville despite marking “NO” to the citizenship question. Cazon also marked his form that he wished to serve as an election official. 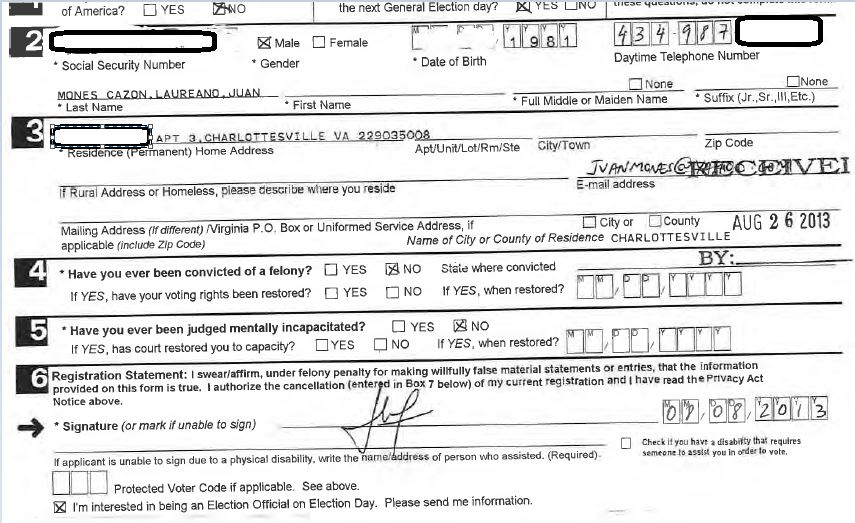 All can be accessed by law enforcement personnel at this link.

As day follows night, the people most obsessed with Russian influence in American elections will excuse away the behavior uncovered in the PILF report. Here are some voter fraud axioms:

— The more in a froth you are about Russia and Trump, the less you care about alien registration and voting.

— The more you believe foreigners in Russia handed Trump the White House, the less you worry about foreigners like Xio, Bae, Cazon, and thousands of others participating in our election system.

Yet the law takes a different approach. (Remember that quaint institution — the law?) The PILF report documents election felonies piled on top of felonies.

So you may think there should have been hundreds, or even thousands, of voter fraud prosecutions in Virginia in the last few years. Again, you’d be wrong.

And it’s not for a lack of information. Federal and state prosecutors were made aware of the problem of alien registration and voting by the Fairfax County electoral board years ago. Hans von Spakovsky, who served on that board, told me the information “disappeared into the equivalent of a cosmic black hole.” Not a single alien voter fraudster was prosecuted — even those who cast ballots.

Voter fraud deniers use this absence of prosecutions to argue that voter fraud doesn’t exist. The referrals by Fairfax election officials provide an excellent example of how the lack of prosecution is meaningless data for determining the extend of voter fraud.

The PILF report documents over 7,000 ballots were cast by those cancelled for citizenship defects.

For good measure, Democrats in Virginia launched a successful campaign against von Spakovsky to get him removed from the Fairfax County electoral board. There was no question that the data the board provided was valid. The real issue is that the question was even raised.

If you ask questions and collect empirical data about voter fraud, you must be extinguished.

It explains why Virginia Governor Terry McAuliffe vetoed multiple bills that would have addressed the problems found in the PILF report, including using jury recusal forms filled out by aliens to see if the same recused juror is also registered to vote.

The PILF report catalogs the bills vetoed by McAuliffe.

Ignorance and denial is the preferred approach of voter fraud deniers, with ridicule toward those who ask the questions tossed in for good measure.

In another American age, when government records revealed that crimes were committed by the hundreds or thousands, that foreigners were registering to vote, that thousands of citizenship defects were caught on the voter rolls, everyone would have cared. Democrats would have joined Republicans in seeking solutions. But these days, our political discourse is corrupted by the same lack of intellectual honesty and factual curiosity that Solzhenitsyn described to his bunkmate: they don’t care what you have to say, they don’t care about the truth. They only care about destroying you.

Let’s see what happens. Will there be any intellectual curiosity, any effort to expound on what we now know about defects in at least one state’s election administration?

Or will we hear, yet again, the tired propaganda about “voter suppression” and the “myth of voter fraud?”

Maybe, just maybe, those tasked with enforcing the law at the United States Department of Justice and county prosecutors will ignore the nonsense and click the links — where hundreds of pages of real evidence can be found.

J. Christian Adams is an election lawyer who served in the Voting Rights Section at the U.S. Department of Justice. His New York Times bestselling book is Injustice: Exposing the Racial Agenda of the Obama Justice Department (Regnery). His website is www.electionlawcenter.com. Follow him on Twitter @electionlawctr.