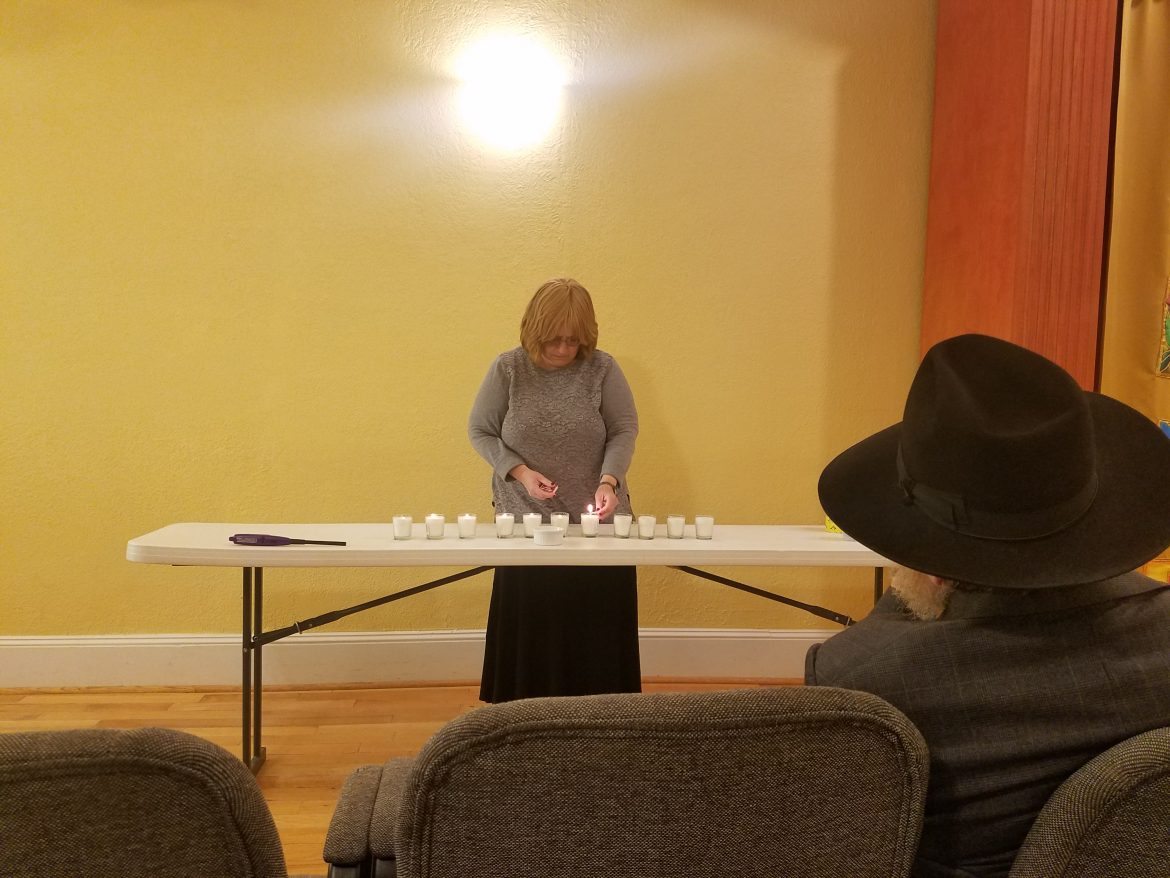 "The wife of Rabbi Aaron Margolin lights a candle for each of the 11 victims of the Pittsburgh synagogue killings, at CHABAD-Tidewater's memorial service Sunday Oct. 28 in Norfolk."

‘Am Israel Chai’ – but will America’s liberal Jewish community return to the fold, or keep blaming the Republicans?

With the tragic shooting deaths of 11 synagogue goers in Pittsburgh at the hands of a deranged 46-year-old white supremacist, the American Left is suddenly embracing the cause of rooting out anti-Semitism but is only doing so because it’s a means to bash President Trump, the Republican Party, gun owner rights, Trump’s efforts to control the borders, and thus influence the Nov. 6 midterm elections to benefit Democrats.

It doesn’t matter that Robert Bowers, the assailant, had legal permits for his weapons nor the fact he bashed Trump on social media, saying he was. “surrounded by kikes.”   All that matters to the Left, including many Jews, is that Trump has “created the climate” for this to happen.  As such, the incident is met with the usual Leftist handwringing and sympathy and will likely dissipate until the next tragedy dominates the media for liberals to find victims and villains.

But because this tragedy occurred within the same week that a kook Trump supporter in Florida was sending explosive devices to various Democrats and Trump opponents, this massacre (unprecedented in the U.S.) only adds to the liberal media frenzy.  All over CNN, MSDNC, and newspapers, Republican campaign ads and messaging are being subject to attack for having subliminal anti-Jewish messaging, such as House Majority Leader Kevin McCarthy’s recent tweet about three wealthy American Jews helping the Democrats.

As a Jew, who attends Shabbat services and Torah study several days a week, I certainly should be concerned about my security and that of my fellow Jews in this nation, and abroad.

But being observant and having faith in HASHEM (the Almighty), I am praying for the victims and their families, but not willing to assess blame on politicians or expect them to do anything about it that would be constructive.  I also have faith in the Constitution and the solid American tradition of protecting religious freedom. And, our judicial system is working, as Bowers is in custody and the Justice Department is going to seek the death penalty.

The reality is that extremism and intolerance is the problem here, and how some of us get isolated in the world of social media and overly worked up by what we read online, in print and watch on TV, and act out on it in violent ways.  Thankfully, this is the minute exception, not the rule.

Extremism, Left or Right, has imperiled Jews and other religious, ethnic and racial minorities since the dawn of time.   Jews are the perennial scapegoat. We cannot minimize the danger that the KKK, neo-Nazis and alt.right pose, any more than the threat of Islamofascist terrorists who kill Jews and others, including Muslims.

It is vitally important for Republicans to reject and distance themselves from the alt.right and neo-Nazi/KKK types, which we have, but Democrats need to own up and do the same with the array of radical Leftist protest groups, and those who have sought to kill or injure their conservative opponents.

Jews should recognize now, more than ever, that there are people here and abroad who hate us, and we have to fight back and not give in and live and acknowledge our Yiddishkeit (Jewishness).

As Rabbi Aaron Margolin of CHABAD of Tidewater in Norfolk wrote after the massacre: “…as Jews, we know we cannot be vanquished by hate. Our spirit cannot be diminished by wickedness. We do not give in to panic or bitterness. We, the Jewish people are a collective affirmation of life. Our existence and achievements are a living testimony to one of Judaism’s greatest messages to humankind: the principled defeat of tragedy by the power of hope. Because that’s what we Jews do.”

But the other reality is that out of some 6 million Americans who identify as being Jewish, fewer than 30% are members of a synagogue, and most of those are Orthodox.

This article in the Washington Post points out the division in the American Jewish community.  It basically backs up my argument, which I have argued on these pages time and time again, that for the 75% of American Jews who vote Democrat in presidential elections, liberalism has replaced Judaism as their religion, as Norman Podhoretz wrote in his 2008 book “Why are Jews Liberal?”

I find that the more one embraces God the less they are apt to find scapegoats to blame, regardless of their political viewpoints.

Hence, Orthodox Jews look at this incident differently from the majority of Jewish Americans who are secular and have limited connection with their religion.   Reform and Conservative synagogues have gotten away from religion and have become more like social clubs, particularly stressing “Tikkun Olam” (Repair the World).  In other words, “social justice.” But they are losing members and a number have had to leave or sell their buildings due to insufficient membership.

The Tree of Life synagogue where the killings occurred housed three Jewish congregations – a sign that none is large enough to sustain its own separate building.

A number of my liberal secular Jewish friends and relatives are stunned I could still support Trump and be a Republican after what happened in Pittsburgh.  It is these folks who feel dystopic when tragic events like this happen and want to blame Trump and the “radical Right” for anti-Semitism, or look to the government to ban guns and curtail “hate speech.”

However, I still feel at home in the Republican Party, though wish more Republicans and conservatives would embrace and reach out to the growing non-white population groups in our nation.

I was elected to local office four times in heavily Christian/Muslim/Indian Loudoun County and succeeded each time, and no voter ever questioned my religion, or said they would not vote for me because I was Jewish.   Neither I nor my family have been threatened, though my son was once bullied by an anti-Semitic kid at school, but he bullied non-Jewish kids, too.

But when I blogged here in September about my Judaism in reference to the Brett Kavanagh hearings, someone wrote an anti-Semitic comment,  and our moderator, Jeanine Martin, removed it.

I didn’t ask that it be removed, but Jeanine said “I am not going to put up with that garbage!”

That is surely a good sign that Republicans stand against racism, anti-Semitism and other ill “isms” and “phobias,” despite what the liberal media and Democrats will tell you.

Finally, the late Jewish theologian and philosopher Emil Fackenheim said the lesson of the Holocaust is for Jews to remain Jews and “not give Hitler a posthumous victory.”  He wasn’t referring to just identifying as Jewish, but practicing it.

I cannot expect American Jews to become Republicans, but at least some can heed Fackenheim’s words and stand tall and be Jews first and liberals second.

“Am Israel Chai” – the Nation of Israel Lives.

‘Am Israel Chai’ – but will America’s liberal Jewish community return to the fold, or keep blaming the Republicans? was last modified: October 31st, 2018 by Guest Contributor Ken Reid