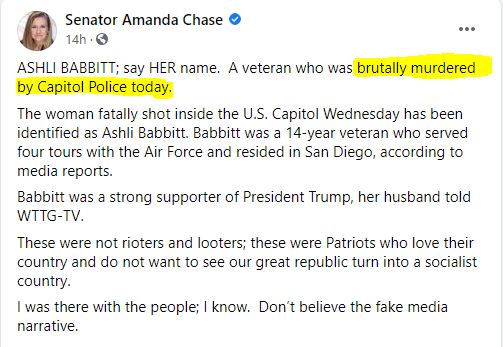 It has been less than 24 hours since insurrectionists stormed the Capitol. There is a lot I have to say about this, and I am still working on getting my thoughts put together, but I wanted to make sure this got the attention it deserves first.

There have already been some pretty bad hot garbage takes on what happened yesterday. Sarah Palin blamed the media. Laura Ingraham was parroting the “mostly peaceful protest” line used by Democrats last summer. Tucker Carlson urged us to try and understand what these poor, angry people storming the Capitol are feeling because they genuinely believe the stolen election lie, while ignoring the fact that Carlson is one of the people egging this lie on.

But the comments by Amanda Chase on her Facebook page have to take the cake. In post after post Chase, who claims to be the Law and Order candidate, has taken the side of the rioters over the police (when she is not trying to claim that they were all Antifa in disguise, mind you).

In two different posts, Chase talks about the poor woman who was shot and killed during the riots yesterday. Note she specifically states that this woman was “murdered by Capitol Police”:

In the next post, she repeats most of the text, and includes a video of the actual shooting. I freeze-framed the video to point out what happened. The person circled in the upper right hand corner of the image is Ashli Babbitt. She is attempting to climb through the smashed out window of a barricaded entryway in the face of armed officers whose job is to protect our elected officials from harm. It is at that moment that she was shot.

She is not a peaceful protester, Amanda. She is not a Patriot. She is a domestic terrorist storming the Capitol by force in order to prevent the certification of electoral votes called for in the U.S. Constitution.

Amanda, if you are so far gone down the rabbit hole of Trump idolatry that you take the side of insurrectionists over law enforcement, then you need to withdraw from the Governor’s race, resign your seat in the Virginia Senate, and leave public life. You need help and you need to pray for guidance and grace.