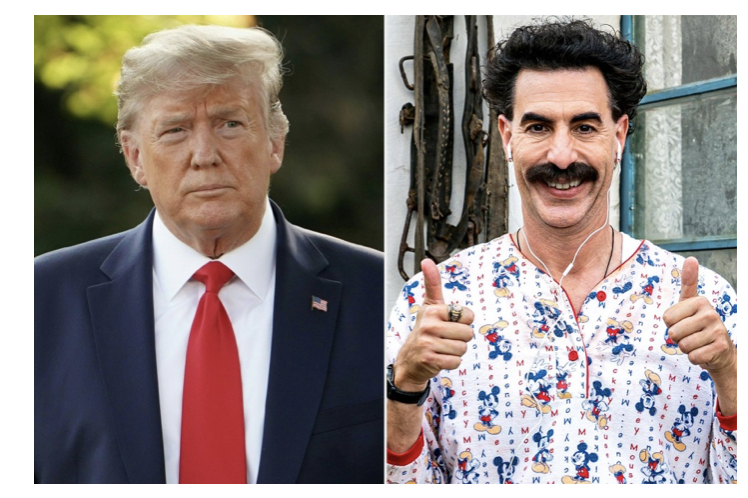 Ambush Journalism is Setting the Left up for Failure

Have you seen that new edgy performance art comedy yet? You know; the one where some toothy grinned huckster poses as a journalist and straight up T-bones conservative figures who are trusting enough to go on their mock pseudo-political program?

I know you thought I was talking about the new ‘Borat’ Film… and you’d be wrong. But you also may be right. I just may be the lunatic you’re looking for. Yet as for the mainstream media’s attempts to shrug off the malison of ‘fake news’ accusations; just turn off the lights. Don’t try to save them.

Leslie Stahl, of the long-running relic from the cretaceous time period known as 60 minutes, recently decided to further invalidate her network’s brand among conservative viewers by ambushing the President. In a series of loaded questions dripping with bacon, chives, sour cream and highly processed cheese, Mrs. Stahl repeatedly used her line of inquiry to browbeat Donald Trump about the head with accusations and snap judgments of his answers. Just watch for yourself here. How many times has a journalist snapped back at Sleepy Joe with a ‘That’s not true’ or ‘But it did not’ retort to a dubious claim? As there was a quick and stern objection from Mrs. Stahl when Trump claimed we were ‘Rounding the corner’ with Covid-19, where was the equally measured interruption to Biden when he claimed ‘Nobody lost their private health care because of Obamacare?’

Borat, the fake Kazakhstani reporter who cut his teeth lampooning flyover country using video-trickery to attack conservatives along the way, is a true art-reflecting life phenomenon. This is how the mainstream news now tries to literally bring down, not extract answers, from Republican figures. Mrs. Stahl, who began by asking the President if he was ready for some tough questions, parlayed this into a virtual interrogation about his social media habits and a fallacious back-ended jab about his taxes. Ask your neighbor, look it up on a search engine… NOBODY cares about these things.

Remember the Candy Crowley moderated debate from years of lore long ago (in 2012)? She moderate the 2nd Obama / Romney debate while an employee of the then still masquerading as a centrist infotainment outfit known as CNN. She gave mild-mannered Mitt Romney the same treatment, She brow-beated, followed up every answer with a hostile skepticism, and even chuckled and gave him a hard time when he pointed out that Russia was a key geopolitical adversary.

Just this weekend, when Nora Donnel gave the counterpiece to Trumps interview on the same program, Biden basically said the same thing as Mitt Romney. Except he was 8 years late… and his whole interview received barely any follow up to his responses. Biden has been thrown softball questions; no, tee-ball questions. Trump has been beaned in the head repeatedly while the umpire calls it a strike.

The point is, in a time when independents and partisans alike are wary of the news being untrustworthy, the news continues to be … well, untrustworthy. This ambush style of journalism only goes to further the fake-news narrative by alienating conservatives into seeing media interviews as something to be avoided at all costs. The news media is seemingly hell bent on witling down their audience.

According to a new study, 84 percent of Americans agree that “the media is to blame for political division in this country,” while 73% see a problem with bias in supposedly objective reporting. The way supposed news journalists from both sides are promoting ad-hominem attacks and turning interviews into a game of bounties is ruining discourse in this country. While I won’t use the term ‘enemy of the people’ – I suppose I will allow my readers to define ‘enemy’ on their own terms.

Which brings me back to the fake documentarian of ‘Borat’ fame, liberal hero of the day Sasha Baron Cohen. In the review section of the UK Sun, a Black Movie Critic lamented how ‘ He wished his character would go after the halls of power rather than the tenants of middle America. And that’s essentially what Borat is; A joke on America, not his home country of Britain. Then again, everyone wants to take ou down when you’re on top.

Perhaps the biggest joke is on Trump-hating liberals, reticent that the movie release date was 9 days before a presidential election. Folks in other countries don’t see the minutia and poltical micro-climates of the USA. They watch Borat, where he cut-edits and tricks simple working class folk into saying things they wouldn’t regularly say, and think we are all idiots.

Even more interesting is how the libs are starting to realize this type of sick guerilla gotcha-ism could be bad for business. Vox, not Fox, but uber-progressive VOX recently did a piece about the provocateur Cohen and called his antics ‘exhausting’ and ‘a new low for liberals’. In further breaking down the implications and discord in this country in respects to the media, Vox writer Aja Romano had this to say about this style of claptrap:

“It further perpetuates and entrenches not only the cultural ideological divide, but the idea among conservatives that “liberal” media, including entertainment media like Baron Cohen’s production, is a constant and perpetual trap to be distrusted at all costs.”

Ambush Journalism is Setting the Left up for Failure was last modified: October 27th, 2020 by Guest Contributor Dylan Kelo