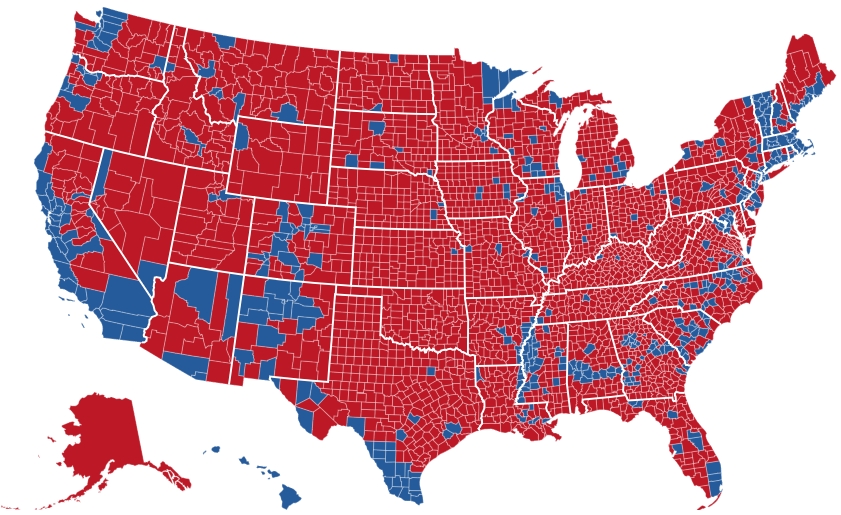 Wow. What a difference a week makes.

Rarely has an election proved the glaringly obvious with such resounding clarity.Â

Demonstrating the enormous depth and the breadth of the Trump earthquake is easily observable in the reaction to it by the â€œruling classâ€ on the left and right â€“ and the county map of the United States. (Demonstrating the wisdom of the Founding Fathers giving us an electoral college, by the way.)

Make no mistake; there will be no honeymoon for President-elect Trump.

Already every word and every step he and his team takes is being second-guessed and criticized out of hand. And the corporate media pack of Jackals are working the political Serengeti, looking to take down a few of the inner circle â€“ early â€œkillsâ€ to show Mr. Trump they have teeth. The attacks have already been vicious, cobbled together with absolute lies and half-truths, with no pretense of objectivity nor even basic decency.

This is how you know putting â€œAmerica Firstâ€ again has found legs.

There are more self-serving autopsies on last weekâ€™s election than there are mushrooms after a summer shower. Mostly they are from folks who have been telling the world with glib assurance since the summer past that not only was Donald J. Trump doomed to a devastating defeat, but the Republican Party would be left in shambles as a result of his quixotic campaign.

And it wasnâ€™t just liberal commentators, whom one must forgive because theyâ€™re always wrong. There were also a slew of pseudo-conservatives and Republican house pets for the big papers and cable outlets, prophesying that all was lost because of the toxic Mr. Trump.

Many reveled in the predictions of his impending defeat.

And all of this was driven by the major corporate media in collusion with the Democratic Party, we now know as fact by their own emails. (Thank you WikiLeaks!)

In truth, most of the commentators and pontificators have long established records of being wrong on virtually everything – the culture, public policy and politics. But they are never embarrassed nor lose a dime by being consistently wrong, just as the â€œruling classâ€ politicians never lose their pensions for gross incompetence. Nor do our top business leaders lose stock options for doing a lousy job. Nor do our top religious figures lose positions for emptying out their churches and synagogues.

And therein is a dirty little secret of the â€œruling classâ€ that has driven the United States culturally and economically into the jagged rocks:

Meritocracy, responsibility and personal virtue have largely been replaced by a collectively fashionable social â€œconscienceâ€ based in emotionalism, and a juvenile form of doctrinaire socialism dressed up as serious intellectualism, capped off with a virulent rejection of the Judeo-Christian ethos of the last two centuries. The left was long ago captured in this orbit, and it now has a foothold even in the right.

This movement is now so ubiquitous throughout our culture and our institutions that out-and-out idiocy is celebrated as substitute religion (think climate change as an example; proven by the fact that its radical proponents suggest jail time for anyone who publicly doubts the cause.)

There is virtually no national company left that is not cowed by the radicals and revolutionaries that run our major charitable and â€œcauseâ€ organizations, and foundations. You will be forced to â€œcare,â€ and endure indescribably inane prattling about inclusiveness and diversity, while at the same time shamed for demanding high standards and excellence, or worse, living by them.

And resistance has its price: Ask Chick-Fil-A, Hobby Lobby or the founder of Firefox.

Our educational institutions, using their massive wealth provided by federal funding via student loans and grants, have become the primary transmission belt for the very socialist paradigm that has cause so much poverty, misery and murderous genocides in the last century and a half across the world. Yet they preach it and pursue it manically while the culture and the politicians try to find more money to feed the monster that money created.

Then along comes a guy fromâ€¦Queens. Heâ€™s blunt, brazen and outspoken. For all his wealth and power, he is still strikingly a guy from Queens. He speaks in American.

He talks about Americans believing in winning again. He describes the self-evident; we have a lot of really stupid, greedy and self-indulgent people running â€“ and feasting off â€“ the government and our major institutions. They have, he proclaimed, stopped believing in our nationâ€™s exceptionalism, and have a misplaced sense of responsibility and the duty to everyone but our own nation and its citizen. He is clear, we have allowed crony capitalism and massive socialist programs to grow like Kudzu on the economy and have been telling hard-working Americans this is the new normal.

It has to stop, he says passionately.

Few of his supporters think he can accomplish all he has set his mind to. Most of them have heard the promises and the lies all their adult lives, so they remain gun-shy. But the furious, out of control, reaction to Donald J. Trump validates what they already think, and that in itself may be the President-electâ€™s biggest advantage.

So while the â€œruling classâ€ is in total revolt and in incoherent, vicious hysteria, a lot of Americans are smiling to themselves. Theyâ€™ve been reminded; weâ€™re Americans.

I’m no Christie fan, but it sure looks like Trump did him dirty. How about a story on what happened with Christy?

As they say, one must hit rock bottom before they can pull themselves up, I would say America is ready.

Mike – not that I doubt you, because I know you are right, but what evidence (besides the Donna Brazille fiasco) was there of collusion between Dems and the Media?

Right of the top of my head, writer at the NYTimes were sending articles to the Clinton campaign for “approval” before going to print. There were more.

An snake pit actually, that the corporate media has ignored, of course. You can visit Wiki for source material, The interconnections and slavish role of media to radicalism is really shocking – even for those of us who knew it! At some point I will do something more on it…but, alas the plate is full for the moment.

Mr Giere rises to the challenge with great skill with his accomplished and thoughtful novel, I mean article..
https://uploads.disquscdn.com/images/c1c34bb839fa4b9c09e8c3685e9a3e80be736364eb1f58cc61e5c205d15ddac7.jpg Finally did the book review on amazon..

Obviously, an extremely astute, well informed and thoughtful reader. Best of the best.

Michael, superb as always! What is going on is so instructive to watch, though so sad. It’s so interesting to compare these present riots and grade school demonstrations and walkouts against Trump’s election against those put on by all of the white-supremacist, racist haters when Obama won twice…Oh, wait…guess we can’t compare, as the latter never happened…

Another spot on article Mr. Giere.

I had to laugh when I saw the photo-ops withTrump and Ryan. It looked like a man with an adolescent. Still, Mr. Trump, don’t turn your back on the globalist hack from Wisconsin.
Not that it matters, but I’m originally from Queens; the Donald had a solid rep going way back.

Hey Guys! Can I say that I am from Queens if I used to drive cab out of Long Island City?

Must be that the East River still runs between Manhattan and Queens!

Hey, I’m from Queens! But he has more going for him than just being from Queens. Francis Lewis, a founding father, is also from Queens. And, I think Nancy Reagan lived there for a while.

Hey! Guys! Can I say I am from Queens if I used to drive cab out of Long Island City?

I also used to drive a cab. Don’t recall which part of Queens the garage was in. That was an experience.

My company was near the Queensboro Bridge. I’d get out at the 39th Avenue Station on the line that runs out to Astoria, which by the way, was were Steinway originally built pianos. The cab lot is still there, right across of the station. I learned more about life, and how to read people, than anywhere else. Take care Old Stone!

My driving was in the ’70s, right before they went to leasing. Thems was the good old days!

Mine was in the mid-seventies, also. Yes, they were the good old days.

You say: “Meritocracy, responsibility and personal virtue have largely
been replaced by a collectively fashionable social â€œconscienceâ€ based in
emotionalism, and a juvenile form of doctrinaire socialism dressed up
as serious intellectualism, capped off with a virulent rejection of the
Judeo-Christian ethos of the last two centuries. The left was long ago
captured in this orbit, and it now has a foothold even in the right.”

Oh, really? Perhaps you have the studies to support such a broad claim?

Just shut up. No one cares.

I visited Chicago back in September and budgeted for my last two to be spent in the Trump International Hotel there. It was a highly impressive experience, from the design to the staff. We have a highly capable Executive moving into the White House 20JAN17.