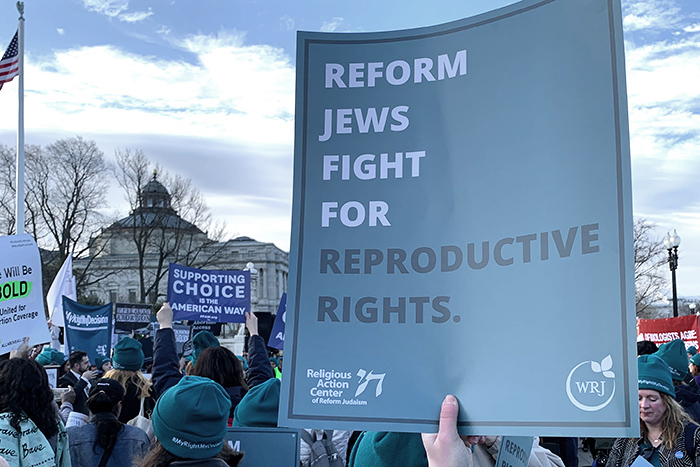 This is really a ‘battle’ between conservative Christians and leftists

Where do Jews stand on abortion, and the recent US Supreme Court “Dobbs” decision which overturned the landmark Roe v. Wade decision of 1973 and said the individual states can regulate the procedure?

As a “Member of the Tribe,” I’ll give you a pretty typical Jewish answer:  it depends;  in this case on one’s politics and level of religious observance.     See THE SCHISM IN AMERICAN JEWRY  and this article and this one.

According to Pew Research’s 2020 survey of American Jews,  71% of all American Jews are Democrats or lean Democrat.  Only the Orthodox are overwhelmingly Republican (about 75%).

Here are summations of the official statements of major Jewish movements – Orthodox, Reform and Conservative.  I include Pew’s percentage estimate of how many Americans these movements comprise:

REFORM JUDAISM – 37% OF AMERICAN JEWS   The Religious Action Center of Reform Judaism, the Washington office of the Union for Reform Judaism,  issued statements from several spokespersons:

One said the decision was “rooted in anti-Black racism, white supremacy, and other systems of oppression,”  another, described as “a Cis woman” who once had an abortion:   Depriving trans and nonbinary individuals and women with uteruses in our country of access to abortion undermines the freedom of minority religions – like Judaism – upon which our country was built.’

However, on the website ReformJudaism.org,  Rabbi Julie Zupan, was less combative:

She writes:  “…, Reform Judaism holds that abortion is both a medical and spiritual decision and that the decision to terminate a pregnancy is one that, in all circumstances, should ultimately be made by the individual within whose body the fetus is growing.  We believe that life is sacred and that the life and well-being of an existing life must be prioritized over the possibility of potential life – beliefs that are grounded in careful reading of Jewish text and tradition.”

UNITED SYNAGOGUE OF CONSERVATIVE JUDAISM (USCJ):  (17%) stated through its international president, Ned Gladstein (whom I have met in person)

However, Gladstein listed a number  articles by the Committee of Jewish Law and Standards  which makes official policy for Conservative synagogues, and none was newer than 2010.

According to a 2001 treatise on partial birth abortion, CJLS stated: “ In sum, it appears that there is sufficient reason to ban the D & X [dilation and extraction] procedure as a planned procedure of abortion to Jewish women and to Jewish practitioners since it appears, in the eyes of Jewish law, as at least possible that birth has already occurred. The clear line in our sources is birth. The clear intent is to favor life.”

So, officially, the Conservative Masorti Movement wants limits to abortion – but its Dobbs statement, like that of Reform, expressed the emotionalism of the day.

ORTHODOX UNION (9%)  When the Dobbs decision was leaked and when it was formally announced, OU wrote the following:

“The Orthodox Union is unable to either mourn or celebrate the U.S. Supreme Court’s overturning of Roe v Wade. We cannot support absolute bans on abortion—at any time point in pregnancy— . Similarly, we cannot support legislation that does not limit abortion to situations in which medical (including mental health) professionals affirm that carrying the pregnancy to term poses real risk to the life of the mother.

OU adds: “Jewish law prioritizes the life of the pregnant mother over the life of the fetus such that where the pregnancy critically endangers the physical health or mental health of the mother, an abortion may be authorized, if not mandated, by Halacha and should be available to all women irrespective of their economic status.”

“Halachic” means “Jewish law, which goes beyond what is written in the Torah and includes rabbinical interpretations in the Talmud and other writings.

The Orthodox CHABAD Lubavitch, the largest Hassidic Jewish movement on Earth, elaborates on its website:

But that footnote reference above is revealing.  It reads:

“Ending a viable life — after 30 days since birth — is considered ‘certain murder.’ After 6 months of pregnancy, when the fetus may be viable, it is considered ‘possible murder,’ and it is permitted to abort only when the mother’s life is endangered… Between 40 days and 6 months of pregnancy, the fetus is considered a ‘developing life.’ Before 40 days it is considered ‘potential life’ (which is why wasting seed is also forbidden). Aborting during these last two time periods may be permitted under certain circumstances that override ‘developing life’ and ‘potential life’—as always, an expert Rabbi needs to be consulted.”

The OU, perhaps sensing it has division on abortion even among its very-observant members, made no mention of these details.

But at the end of the day, the battle between pro-life and pro-choice forces is largely a conflict between the pro-life Christian Right and the largely non-religious pro-abortion Democrat Left.

Abortion is not something that impacts the American Jewish community that much.  First, we are but 2.4% of the US population (2020 census), and the number of Jewish women who terminate their pregnancies is minuscule.  However, a few of my Orthodox Jewish female friends were pretty outraged by the High Court’s decision and liberal Jews have rallied for Roe including this one in front of the US Capitol in May  and a Richmond news conference former Virginia House Speaker Eileen Filler-Corn, who is Jewish, held with pro-abortion rights Virginia Jewish groups (but no representation from Orthodoxy).

But to allay fears, I have urged folks to read this article I wrote on   Bacon’s Rebellion,  which has hard data (not hype) showing that despite “Dobbs,” the overwhelming number of safe and legal abortions will continue.

Abortion must be made illegal nationwide. It is a scientific fact that human life begins at conception. Abortion is murder because it is the purposeful and premeditated killing of a human.

So Jews support Legislation from the bench overwhelmingly? Thats how I read this. SHAME on us/them?

Just read that some high school “students” are reevaluating their choice of a college because of abortion restrictions in those states. If abortion defines your life choices rather than engineering or science, you are in trouble – but then you are likely to be an ignorant democrat which means you are always in trouble and blaming other for your trouble.

“Dr” if you think states that enact laws removing a woman’s right to terminate her pregnancy are not going to pay for such actions, you are grossly miscalculating their self-inflicted damage.