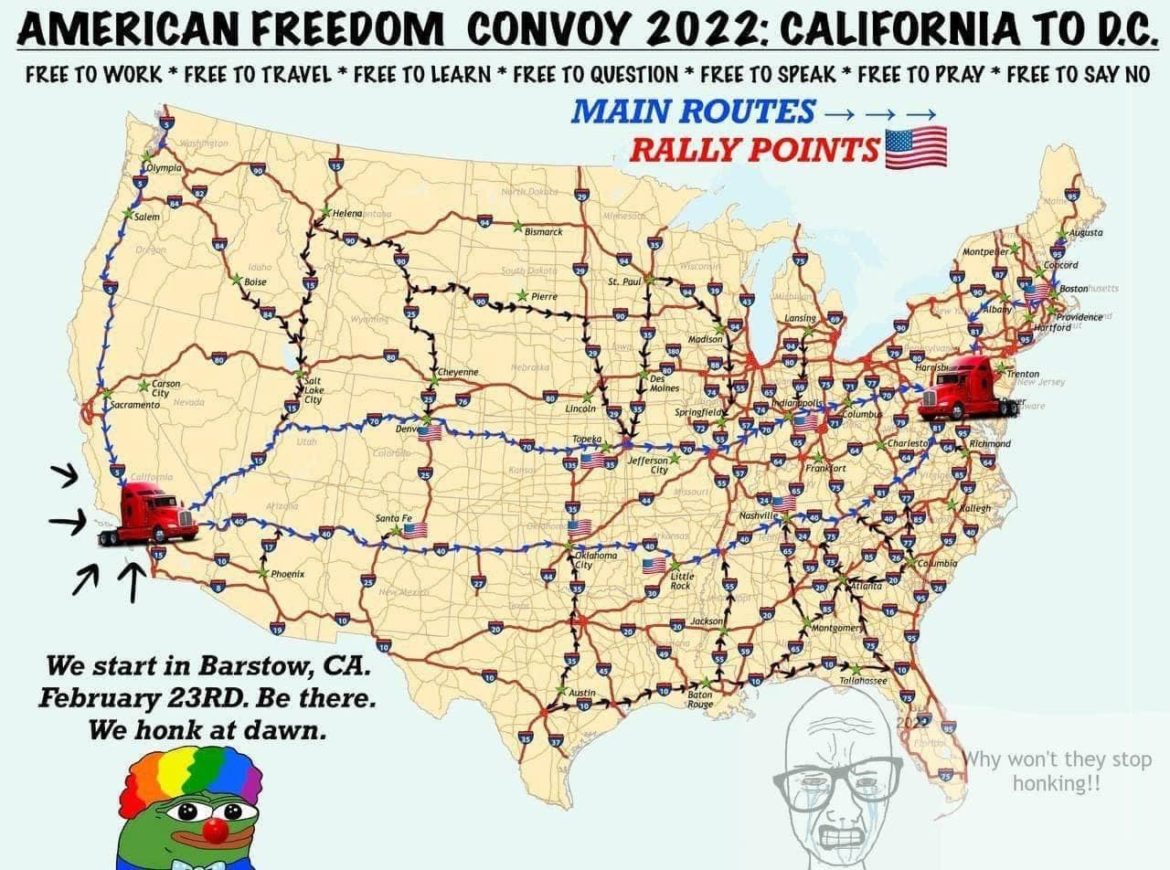 The American Truckers protest convoy will leave Barstow California on February 23rd and head to Washington DC in time for President Biden’s State of the Union address on March 1st. They will begin with 1,000 truckers joined by other trucks and cars along their way across the country. They expect their numbers to swell to 10,000 before they reach Washington.

The protest is called “The People’s Convoy” and is designed to protest the emergency powers the President has taken during the pandemic and in support of the Constitution and Freedom.

“This is about our rights, as well as the freedom of future generations,” organizers of the convoy wrote onÂ Facebook. “It’s not about political parties, but more so about a government that has forgotten its place and has no regard for our founding fathers’ instructions.”

Speaking of â€œfreedomâ€ â€¦ All 3 Republicans running for Michigan Attorney General have stated that they oppose the ruling in Griswold v Connecticut which outlawed prosecuting married couples for using contraception.

This is where Conservatives want to take Americaâ€¦

A truck convoy isn’t needed to shut down DC. Experience shows that just one disabled car on the beltway results in total gridlock.
Or an ice storm when McAwful was governor. He shut down the I-95 corridor for days.

A general strike like Poland in the 1980s would work better.

The truckers and anybody who is a Trump supporter best be careful. On the news tonight, one Canadian official was asked about confiscating and freezing financial assets of people who don’t support Trudeau. He specifically mentioned Trump supporters.

” He specifically mentioned Trump supporters.” Yeah, sure he did

The purge of the police and the military by the bidenite global fascists is of concern. See Trudeau and the use of police and military forces against the freedom convoy.

the purge of the police and the military? What on earth are you talking about?

Tunnel vision is not your friend but you are good at it.

~shrugs~ so teach me what he meant

It is about the parties democrats, rhino’s and Trumpers!

If they had real jobs they wouldnâ€™t have time for this crap. Bunch oâ€™ hippies and neâ€™er do wellsâ€¦â€¦oh, wait a minute