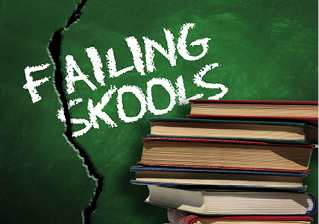 According to a recent Rasmussen survey only 30% of Americans rate US schools as ‘good’ or ‘excellent‘ and as a result they are not willing to pay more in taxes to support what they view as mediocre schools.[read_more]

Perhaps that’s because in the latest international educational assessments for 15 year olds, US students did not do well. More than half a million students around the world took the Programme for International Student Assessment in 2012. The US ranked 17th out of 34 countries. The US was behind such known educational powerhouses as Lativa, Korea, Poland, and Estonia. The full chart of results for all countries is posted below. From theatlantic.com article entitled, “American Schools vs.the World: Expensive, Unequal, Bad at Math”.

The U.S. scored below the PISA math mean and ranks 26th out of the 34 OECD countries. The U.S. math score is not statistically different than the following countries: Norway, Portugal, Italy, Spain, Russian Federation, Slovak Republic, Lithuania, Sweden, and Hungary…

One in four U.S. students did not reach the PISA baseline level 2 of mathematics proficiency. At this level, “students begin to demonstrate the skills that will enable them to participate effectively and productively in life,” according to the PISA report.

That means 25% of our students don’t know enough math to function in life. That’s pathetic.

However, few countries pay as much for this mediocre education as we do. From the same Atlantic article,

America Spends a Lot of Money Per Student

The U.S. ranks fifth in spending per student. Only Austria, Luxembourg, Norway, and Switzerland spend more per student. To put this in context: the Slovak Republic, which scores similarly to the U.S., spends $53,000 per student. The U.S. spends $115,000. The PISA report notes that, among OECD countries, “higher expenditure on education is not highly predictive of better mathematics scores in PISA.”

Perhaps this explains why Americans are not willing to pay more in taxes for schools. It’s not because they hate children, or education, but they know they’re not getting their money’s worth in our schools today. 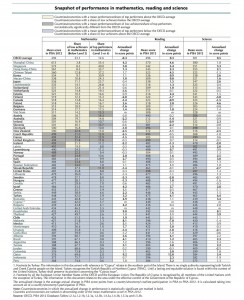