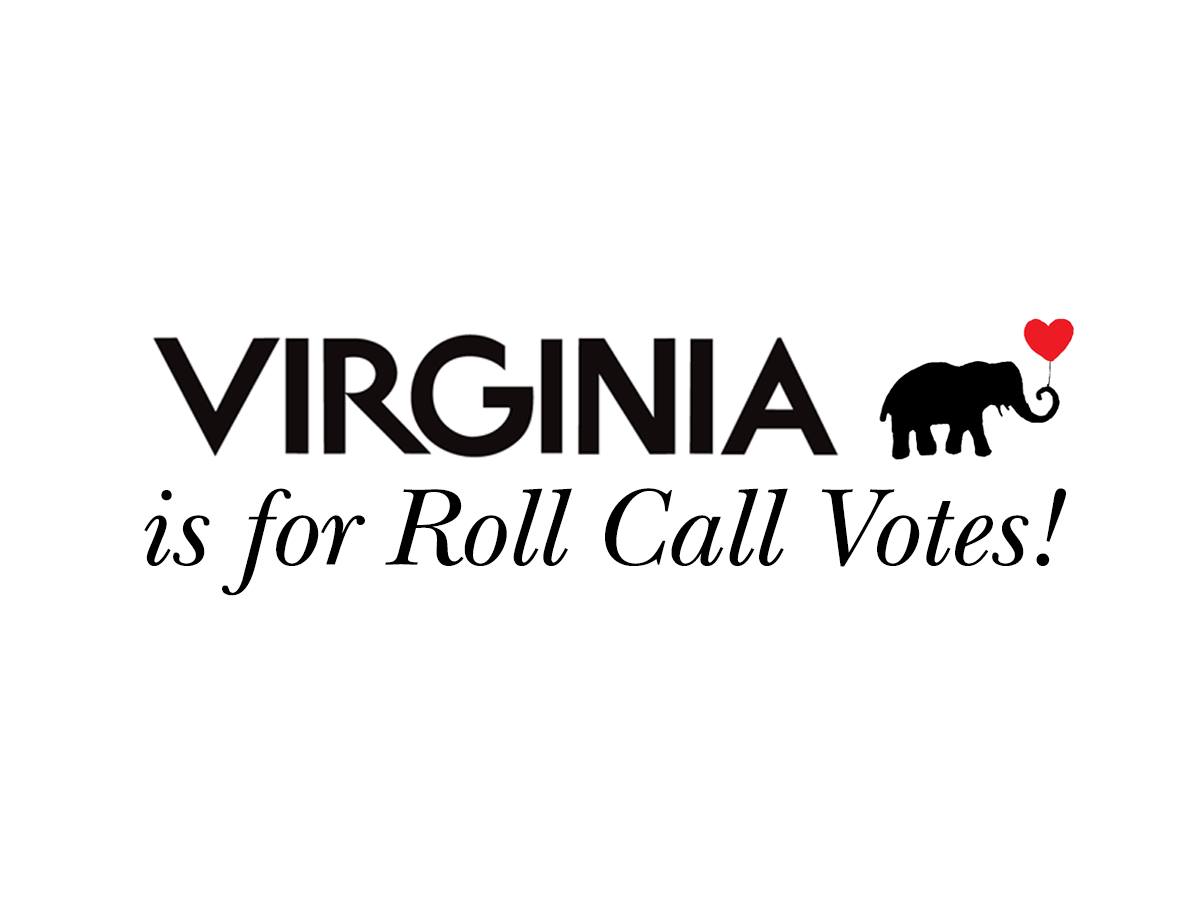 An Inside Look At How The RNC Steamrolled Conservatives

After an explosive and divisive primary season, RNC Chairman Reince Priebus decreed the national convention to be a place of unity. After all, bringing together the divided factions of the Republican Party was the only chance Donald Trump would have of achieving a victory in November. This convention needed to be a graceful extension of goodwill from Trump and the RNC to the grassroots. But much like 2012, it quickly descended into a hostile rejection of the conservative grassroots.

Ken Cuccinelli, former attorney general of Virginia, along with the Trusted Leadership PAC, recruited me and a few others to build a coalition of RNC Rules Committee members and grassroots delegates. Among these rules members were U.S. Sen. Mike Lee (R-Utah) and Morton Blackwell, a well-known conservative stalwart on the RNC. Our goal was to craft and implement a rules package that would incentivize states to close their primaries, reward Republican states with more delegates and decentralize RNC power. It is important to note that, at no time, did this coalition pursue the unbinding of delegates, a common media misconception.

On the other hand, it should have been obvious, even to a college student like me, that our goals were to dial back Establishment power – precisely what Trump claims is his goal.

Considering these RNC committees are chaired by Priebus appointees, and the membership consists overwhelmingly of establishment representatives, this was a formidable mountain at best, a suicide mission, at worst.

A week before the convention, on the eve of the Rules Committee meeting, the RNC leadership picked up on the plan and contacted Cuccinelli to work out a deal. The grassroots coalition made it clear they were willing to work together, if better rules could be achieved.

The RNC offered to support our amendment that would give a 20 percent delegate bonus to all states that closed their primaries, but in exchange we had to drop all proposals to limit the power of the chairman. This was obviously an attempt by Priebus to retain the full authority of his chairmanship.

On the morning of the rules committee meeting, the RNC pulled out of an agreement that was reached, all while claiming that it was Cuccinelli who bailed on the deal. This was the first of many power games played by the RNC throughout the convention process.

Thursday morning, as the committee gaveled in, Enid Mickelson, the chair of the committee, reminded members that her focus was on having a “fair” and “open” process. The proceeding then began and our coalition immediately started presenting its amendments. The RNC seemed frazzled by our organization, which led quickly to a four-hour recess. What was the excuse for the long intermission? A printer failure. 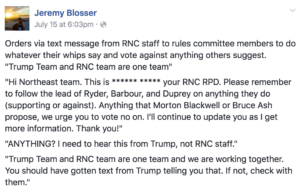 When the meeting reconvened, the RNC had teamed up with the Trump Campaign in a surprisingly organized whipping operation. As our coalition presented its rules, one by one the Trump/RNC alliance voted them down. They sent texts to the committee members telling them to vote noeach time a conservative stepped to the mic. One text read, “VOTE NO on ALL Morton Blackwell amendments.” Another text referred to our coalition as “lemmings” for pressing on regardless of opposition.

Out of the 112 members on the rules committee, our grassroots coalition had over 30 participants. There were three other coalitions: the Trump campaign, the RNC (42 members of the Rules Committee were RNC members!), and the coalition of delegates that supported unbinding the delegates. Not including the unbinding group, any two of the other three coalitions could command a majority if they stuck together.

Our coalition was counting heavily on convincing rules members on the merits of the proposals – this was not a “political” play.

Throughout the day, more and more rules members received personal calls from Priebus – either intimidating them into voting against the movement, or asking for a “personal favor” to do so. By the latter part of the 13-hour meeting, the RNC was instructing members to invoke a parliamentary motion to vote immediately without debating the proposed amendments (so much for “fair” and “open” debate…). These strong-arm tactics of intimidation and shutting down debate left conservatives on the rules committee frustrated, which was RNC’s goal.

And while we were relying on the anti-establishment delegates coming to the convention for Trump, since the Trump organization lacks a central, convictional commitment to conservatism, our actions were seen as an attack on the candidate and not the establishment. Tremendous lost opportunity.

At the conclusion of the meeting, there was a sum total of 1 out of 40 conservative amendments passed, most of which were agreed upon by the majority of Republicans. But regardless of the results, two paths forward existed. A provision in RNC rules allow for a minority report to be filed with a minimum of 28 signatures. This can be an amendment, or series of amendments, that go directly to the floor of the convention for a vote by all 2,472 delegates. Or, we could simply target voting against the rules in their entirety, sending them back to the rules committee to do better for the grassroots.

After much deliberation, we chose the latter.

The remaining members of our group drafted the letter and sent it out via email and social media to delegates from all over the country, urging them to reject these rules, which were nothing more than yet another RNC power grab. A list of grievances, including a demand for representation, written and signed by delegates to a convention. Sound familiar?

Unfortunately, the rules committee report is either adopted or rejected with a simple voice vote of aye or nay. As you can imagine, the two can be entirely indistinguishable in a room of 2,472 delegates. There is, however, a procedural motion that can allow for a roll call vote, which requires every delegation to report its exact number of votes. The motion can be made with the majority support of seven states.

So, the grassroots ignited activists, gathered up petitions and, in less than a day, obtained the signatures of a majority of eleven states. As per the rules, ten of these petitions were submitted to the secretary before start of the convention on Monday morning, but not without a struggle. The 11th petition – from Alaska – was physically blocked from being delivered. Because the convention secretary is the only officer who can accept these types of petitions, she hid behind two armed guards, not allowing former U.S. Sen. Gordon Humphreys to turn in the petitions for several hours.

Simultaneously, the Trump/RNC whips were working frantically on the floor to have delegates sign a second petition to retract their names from the first petition. There were many claims of delegates being bribed, berated, and, in the case of Minnesota and Iowa, having their state funding pulled if they did not pull their names from the first petition. 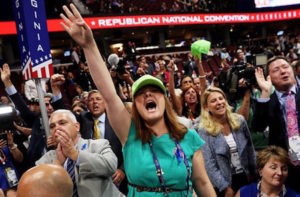 When the convention chair called for the vote on adoption of the rules report, the ayes were clearly indistinguishable from the nays. That didn’t matter. The chairman slammed his gavel and exclaimed, “The ayes have it.” Delegates lined up in front of each mic in an attempt to make a motion for the roll call vote, but were unsuccessful. Both Cuccinelli and Lee had their mics turned off. When the individual motions were not acknowledged, the stadium erupted with chants from each delegation, “roll call vote,” at which point the chairman left the stage.

Ten minutes went by before the chairman reemerged, only to call for a second voice vote with the same outcome. More chanting followed until Phil Wright from Utah was allowed to make a motion for a roll call. The chairman addressed the motion but claimed that out of what he claimed were nine states that submitted petitions, three had retracted enough signatures to be disqualified, dropping the number of qualifying states to 6.

That was when Fred Brown, a delegate from Alaska, rushed to the stage to present his state’s petition. When he was ignored by the chair, he attempted to walk onto the stage to access the secretary, but was physically blocked. Not only was Alaska’s petition ignored, North Dakota’s was not even counted as a submission. That is how they got down to nine petitions from eleven.

It is worth noting that there is no requirement to submit petitions – RNC fabricated this requirement – and we complied with that additional requirement anyway!  All that is required is the majority of seven states delegations – there is nothing in the rules requiring that majority to be demonstrated in writing – an oral vote in a delegation is adequate, but they had shut off the mics!

A scripted resolution to conclude discussion was then read by West Virginia, the gavel was struck and the motion was carried. Sen. Lee said, “I have never in all my life, certainly going on six years in the United States Senate, prior to that as a lifelong Republican, never seen anything like this.”

According to former Sen. Gordon Humphreys, these RNC goons were reminiscent of the Brownshirts, and I tend to agree. Am I saying the RNC leadership are a bunch of fascists? Not necessarily. But I don’t think categorizing what happened throughout the convention process as the expression of fascistic tendencies is by any means out of line.

At the end of the day, would the roll call vote have mattered? We’ll never know. If it had passed and the rules had been rejected, would it have affected the inevitability of Trump’s nomination? No it would not, for our coalition, it was not supposed to!

The media painted this entire project with the “#NeverTrump/unbinding” brush in an attempt to destroy its credibility and scare Trump delegates. Our effort was solely focused on implementing a set of rules that would enable conservatives to take back their party. The supporting votes of the unbinding folks were vastly outweighed by the everyday conservatives who are tired of being trampled by the party establishment.

The entertaining/tragic part of all of this is that under these proposed grassroots rules, many of the problems Trump complained about during the primary would be resolved. State party leaders unilaterally selecting delegates? BOOM! Gone. State selection committees that bypass the voters? Nope. Lobbyists buying and selling influence on RNC? Not anymore. I dare say, If Trump supporters actually stopped to consider what we were proposing, they would have voted with us.

Conservatives are not the enemy here, no matter what creative nicknames are ascribed to them. The enemy is anyone who uses power and influence to deprive you the voter of your voice. From what I witnessed at the 2016 Republican Convention, Reince Priebus and the party elites fit every bit of that description.

Hudson Talley is a student at the University of Oklahoma. In the spring and summer of 2016, he worked on an effort to build a grassroots coalition on the Republican National Committee's Convention Rules Committee to pass positive, grassroots-empowering changes to the rules of the Republican Party.