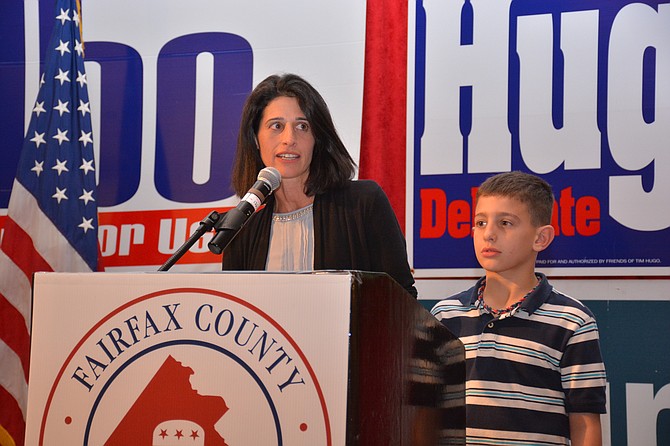 Can I call you Sue?  We’ve never met, and I’m a bit old-fashioned.  Trouble is, I finally got used to the whole Miss/Mrs/Ms thing, but just in the last couple of years I’ve gotten confused all over again.  I mean, it would be rude of me to impose my patriarchal-white-colonialist-cis-male-heteronormative standards on you.  (That’s a mouthful!  How do you all ever get through a meeting?)  And I still haven’t sorted out Chairman/Chairwoman/Chair, either.  So I hope you don’t mind if we’re on a first name basis.

Anyway, I saw your statement on the resignation of Jeanette Hough and I’m puzzled about a couple of things.

You started out by saying that the “Republican establishment” “pressured” Jeanette to resign early.  Wow.  I’ve got to ask — who is in that “establishment?”  I know you don’t mean the Fairfax GOP committee, because this “pressuring” thing is totally news to me.  I don’t think you mean GOP elected officials, because they aren’t in the habit of telling each other what to do.  It’s basically live and let live on our side – but you’ve got Boss Connolly, so maybe it’s different over there.  And I know you don’t mean donors.  Heck, Jeanette beat you guys like a drum in 2015 on a $20k budget.

So I’d be really grateful if you can tell me about this “establishment.”   We have a whole bunch of new voters on our side who came in last year thinking we were the “establishment.” You know them – they used to be your voters.  (Come to think of it, the President used to be one of yours!)  Anyway, we’re trying to build bridges, and if people are going to start blaming the “Republican establishment” for things, I hate being in the dark.  Plus, I’d like to get in on the action.  It doesn’t have to be a $400,000 speaking engagement with Goldman Sachs.  A trip to Paris on Leo DiCaprio’s private jet would be plenty cool.

I’m also wondering if you’ve ever met Jeanette.  Because she’s a smart, independent-minded woman who manages to be decent, thoughtful, pleasant, and tough, all at the same time.  In fact, she’s a darn good politician – just ask Ted Velkoff.  Not exactly somebody who lets herself get pushed around.

Now just between us, we both know we have to throw the base a little red meat now and then – oops, there I go again.  Forgot about the vegans and vegetarians and pescatarians.  It is such hard work to be politically correct.  But I’m trying!

Anyway, I think you’ll find these rhetorical appeals are a lot more effective when you base them on actual facts.  Next time, if you want a reality check, give me a call.

The other thing that puzzles me is the griping about having to pay for a special election.  Since when does anybody in the Democratic Party care about more government spending?  I would have thought this was a good thing!

I have a few suggestions, in the spirit of common sense bipartisanship.  What if we stop hiring consultants to study school name changes that students and parents oppose?  Or make sure the school system actually follows through on employing an internal auditor, so maybe if a program isn’t working we can save just a penny or two?

Or – and this would make my folks really happy – you could just choose not to field a candidate.  We’ll endorse somebody on our side, you can “pressure” everybody else to stay out, and presto — we don’t need an election!  Status quo is preserved, with no money spent!  Whaddaya say?  I mean you’ve already got nine out of 12 seats – why do you need one more?  Share the wealth, isn’t that what Bernie says?

Look who showed up at the Fairfax GOP meeting last night, even though she was in such a hurry to leave the country that she had to resign on May 31st! But here she is almost a month later, campaigning for her replacement! I mean it makes sense to let one’s kids complete the school year.. but it also kind of blows her excuse for resigning early out of the water, leaving behind just the political reason for triggering the mid-summer special election.

Ha ha, the cc to Putin was the icing on the cake.

This is good stuff. Bravo, Matt!

GREAT post! Thank Matt, you are hilarious! I love it!

Maybe when we get a REpublican Governor we will have an Inspector General that can do an objective audit of both the school board and board of supervisors.
The CCing of Putin was a nice touch. We really need to keep our little buddy in the loop.

Republican attempts at humor are the worst.

Democrat attempts at hiding thin skin are the worst. What the matter, you can’t take a fraction of what you dish out?

It’s nice you think this turd smells like roses, but it is still a turd.

Cute, but you should take another look at the 2016 results in Fairfax County. You will see that it was exactly the opposite of what you characterize. Fairfax County Republicans abandoned the party in droves and voted for Hillary Clinton.

You are right also right. This is a huge country and Democrats can’t control everyone who supports DemocratIC candidates, but we sure don’t have to embrace them and nominate them for President. Your party welcomed Donald Trump, just as you did all the former Democratic segregationists decades ago and still cannot shake that racist core from your base.

You also summed up the difference between the different philosophical views on spending between the parties quite well. Democrats are willing to pay taxes and spend money to make a better society – something Republicans have a dogma against. But a key difference is that since, Democrats believe that government is a force for good, we want that money spent productively. Republicans, on the other hand, believe that pretty much everything the government spends money on is waste, so “what the hell” lets just blow over $250,000 on something that you could not even attempt to articulate a public good for if you tried.

If only Democrats had a sense of humor. It would make the country a much better place to live.

No one is stopping Democrats from paying more in taxes! Please do.

You are right about one thing, Republicans have never seen government do something better than private industry and individuals. How’s that ‘War on Poverty” work for ya? How ’bout public schools? How ’bout Metro? I’m sure you get the point, government ruins everything it touches while spending BILLIONS of dollars of our money.

What’s one of the three big lies? “I’m from the government and I’m here to help you”! RUN!!!