VPAP.org analysis of election 2016 in Virginia. 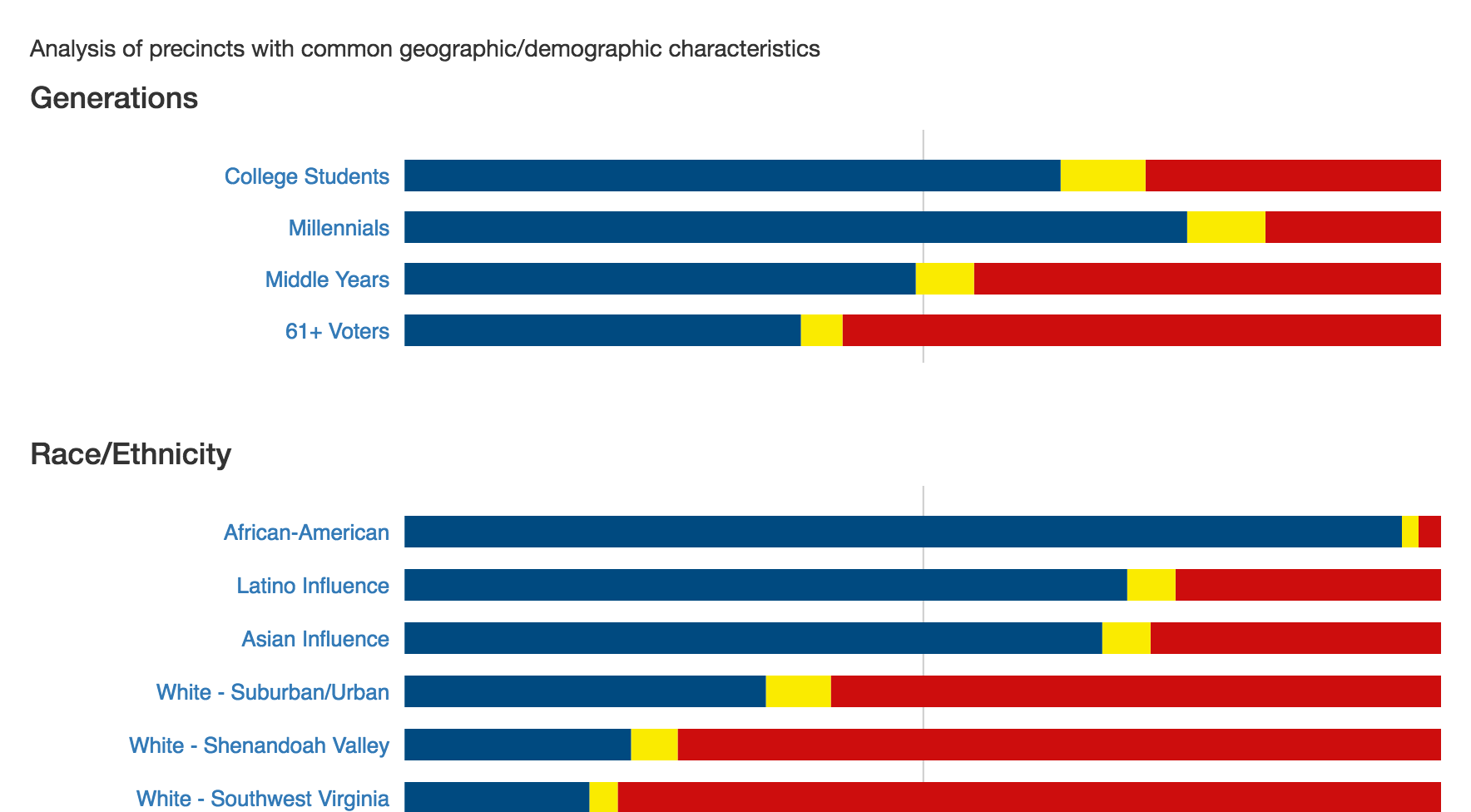 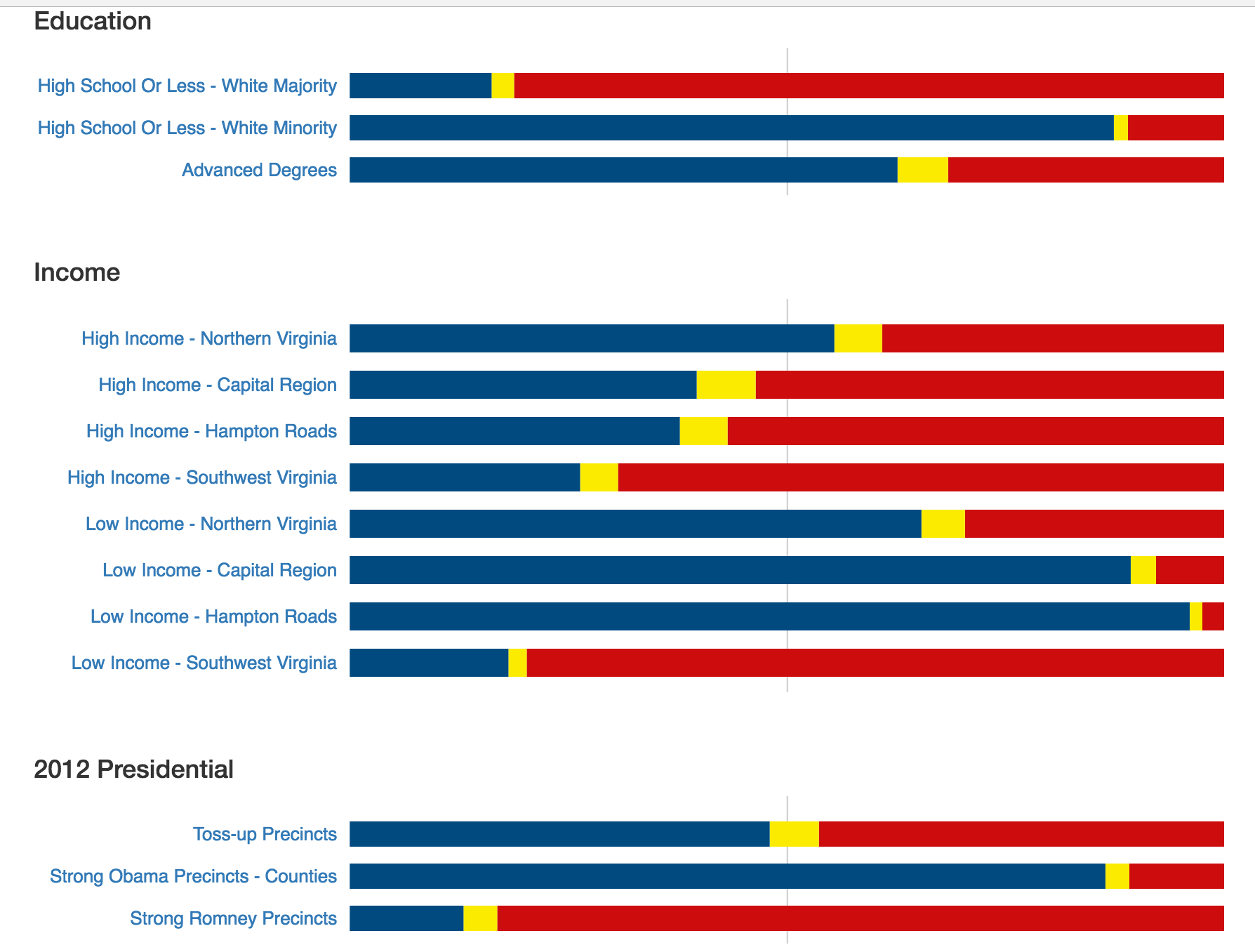 The GOP Establishment wanted open borders… look at your chart. When you combine immigration with the black vote sprinkled with government workers and liberals… they win.

Amen. We should try to keep out or remove all those undesirable brown people, rather than actually try to find common ground and win their votes. Then trumpet that formula for electoral success far and wide!

Don’t be ridiculous as well as racist. Divide and appease is your dem MO, not ours.

Yeah, I’m not a Dem, and anyone who makes comments like “Stonewall” up there is inviting whatever comes.

Pointing out reality based upon the stats, is bad.. Yes. You should be a PC liberal because that is what they do.

This is from the National Academy of Science of all places:

The long-term costs to taxpayers of immigrants and their descendants
are detailed in a new report from the National Academy of Sciences.

The findings in the report indicate that if amnesty for illegal
immigrants were enacted, the government would have to raise taxes
immediately by $1.29 trillion and put that sum into a high-yield bank
account to cover future fiscal losses generated by the amnesty
recipients and their children.

To cover the future cost, each U.S. household currently paying
federal income tax would have to pay, on average, an immediate lump sum
of over $15,000.

The National Academy of Sciences report, â€œThe Economic and Fiscal Consequences of Immigration,â€ provides fiscal balance projections for immigrants and their descendants over 75 years.”

That is reality and that is why not one mother loving Democrat is a hawk on immigration. They see that is can make their party monolithic for the rest of you life.

You’re certainly no Republican. You made the comment about “brown people,” consider yourself disinvited.

Ok… squeal racism… but immigration comes from areas of the world which make Barack Obama look like the greatest capitalist you ever saw. And listen… we are importing poverty. There are no jobs that are going to immediately raise up immigrants to middle class which is where you are going to find common ground… then you add the obvious things that Democrats have to attract identity politics. Do you like affirmative action, otherwise known as political patronage for the Democratic party? Set asides for minorities in contracting? So at the lower end of the economic spectrum, the Democrats offer oh what two dozen welfare programs… and at the middle class and up they offer affirmative action and contract set asides. California is a place which used to elect Republicans until 1986. Can you tell me what happened in 1986? The most massive amnesty in US history. Now the Democrats don’t have to spend a dime there to elect their party.

BS. Even according to right wing sources, McAuliffe has restored the voting rights of no more than 60,000 people during his time as Governor. Clinton won Virginia by well over 200,000 votes.

Let’s do a recount, lots of dead, multiple voters, illegals, and felons voted.

Care to cite any support for that attack on Virginia’s many, local election volunteers and officials? I’m not going to hold my breath.

It’s disturbing when people call you on your baloney, eh? Good luck with “draining the swamp” with Trump and his cabinet, a combination of establishment insiders, crony capitalists, and whatever the heck Bannon is.

Nah, playing with dem/notdem trolls is fun. Trump will do fine, he’s got a great cabinet on deck, and our Virginian smart guy as key advisor. One thing though, I ain’t nowhere nears tired of winning yet!

Do your own search, there is plenty of articles about people voting multiple times in VA, kid in Harrisonburg for starters, dead people voting, illegals and McAwfuls felons. VA is rapidly becoming a state w/high election fraud. Guess you weren’t around for the 700 “found” votes that gave Perriello his victory over Virgil Goode?

I’m not sure whether your greater idiocy is believing the BS you’re peddling generally or trying to come up with 150,000 votes by citing “plenty of articles” and the dumbass in Harrisonburg who sent in a couple dozen applications, got caught, and will be prosecuted. I’m not a Dem; I just care about rational thought and discourse, which isn’t much prized on either political extreme these days.

Sound like a Dem. As I said go spend your own time reading up.

Gotta add the #Nevers to give it to the Dems.

Hardly. Add in illegals. Add in people who vote in MD & VA. Add in MDers who moved to VA to escape the taxes they caused there.

Missed the point. If it were an honest vote, VA would be red.

Didn’t miss it. Just saying that the “felonious assault” on our votes may not be able to change the color by itself. Add in the other illegal votes and it may have.

It really comes down to whether millennials follow other generations and become more conservative as they age, or whether they’re brainwashed with social media and other cultural players to be permanent liberals.

A lot of that hinges on how they view Trump as President. They’ve been told that he’s the worst daemon possible. If they come to find that was all lies, they’ll rethink their views about the left and the right.

Trump MUST do a good job as President.

And “they” must realize it. He owns the power to determine how the Republican Party performs in future elections.

‘And it came to pass that the Republican Party was spared only by their inadvertent standard bearer… Donald J. Trump.’

That would be very ironic

Thank you very much for this information. It was very interesting

He’s already did the job that no GOP nominee could do… win.

If you mean win the primary, yes, that is obvious.
If you mean win against the Hill (sic), there is no way to know for sure.
But one thing is for sure: Ding, Dong, the witch is dead.

I don’t think we could have won with any of our other nominees, even against the witch.

We don’t resonate — Trump gives us a chance to fix things, but we are politically and systemically broken.

That’s what worries me. I’ve been to colleges recently, spoken with students and recent graduates. They are EXTREMELY liberal. I mean they’re to the left to an insane degree, an immature degree. It’s as if they can’t bring themselves to even consider anything that conflicts with their socialist utopian viewpoint of how everything should be.

We need more Conservative teachers and professors. Not to spread Conservatism so much, but just to provide something that isn’t liberalism on campuses.

I once asked a former professor why there are so many leftist bumper stickers at George Mason U. Why would a leftist go to a school named after a conservative founder? He said: most of the students there have no idea who George Mason was. To them, he’s just a statue on campus. Very sad.

We should examine and correct the regents of the state universities.