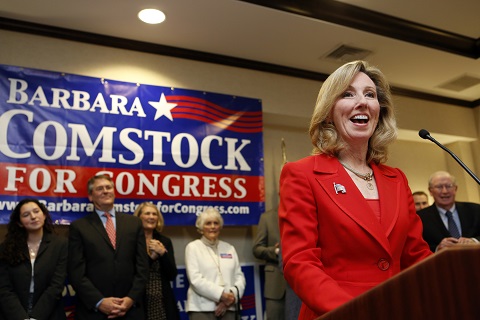 And now there are seven running to replace Comstock

Two more Democrats have recently filed to challenge Rep. Barbara Comstock in the 10th district in 2018.  They are both products of Montgomery County Maryland.

Alison Kiehl Friedman, age 38, grew up in a very activist, very liberal, family in Takoma Park MD.  (Is there any other kind of family in the “nuclear-free zone” of Takoma Park?) She has a degree from Stanford, worked for People for the American Way and Rep. Jane Harman (D-CA). She was executive director of the Alliance to Stop Slavery and End Trafficking.  In 2009 she went to work at the State Department in their anti-trafficking office.  She left there in 2015 and in April moved from DC to McLean.

Friedman was inspired to run when her child wrote a note to the President about love and not hate, even though she was afraid Trump would retaliate and “bring guns to her house”. Her bravery inspired her mother to run for Congress.  (Someone should remind the family that it’s not nice to scare little children with lies about the President.) From the Washington Post:

“If my daughter is brave enough to write a note like that,” she said, “I do have the ability to do more, and what I’ve always loved doing is working on protecting the world’s most vulnerable.”

The other newly registered candidate running for the Democrat nomination to challenge Comstock in the 10th district is Deep Sran, age 45.  He went to Montgomery County public schools, the University of Maryland for his undergraduate degree and Georgetown for a law degree. He later went back to Maryland for a Ph.D. in educational psychology followed by a stent as curriculum director at the Cesar Chavez Public Charter High School. He now lives in Ashburn where he has opened Loudoun School for the Gifted where he can experiment with various educational ideas because he “always felt like education was the way to make lasting social change.” (Isn’t that what schools have been doing for the last 40 years?)

Learn more about the other five candidates vying for the Democrat nomination in the 10th district here.

And now there are seven running to replace Comstock was last modified: June 26th, 2017 by Jeanine Martin

Comstock is a joke, she better hope one of these folks are not a JFK Dem.

Someone needs to take on this liberal fraud in the GOP Primary.

I would still put my money on Comstock. Especially with the Dems apparently doubling down on the losing Hillary rhetoric.

Does one have to wonder if the Hillary rhetoric double down is just to ensure that the Hollywood queers will keep reaching for their checkbooks???

Jim,
They used the “heath care” war on women to WIN 4 years ago.
I expect the same again now that they are saying TrumpCare will cut 800 Billion in SS.
The folks in the hills are not going to come out for Jeb! Gillespie.
They won’t have to make a jobs issue.

The interesting part will be to see how the Democratic Party operates the primary to clear the field. Since they hate conventions, how will a nominee who wins a mere 20% of a paltry primary vote be accepted?

And these are just the Democrats. Will there be any Republican primary challengers or Libertarian (etc.) 3rd party candidates?

Why doesn’t Virginia have a law stating that anyone running for office must have their primary residence in the district they are running for for several years? Carpet baggers are ruining the state.

You need to change the US Constitution first.

Amazing. I’d think that was on a state by state basis. After all, our laws are different than Georgia’s. Their candidate wasn’t every in the same district.

Can so many opponents be called a Comstock Load? ☺

The sharks are really smelling a lot of blood in the water lately.