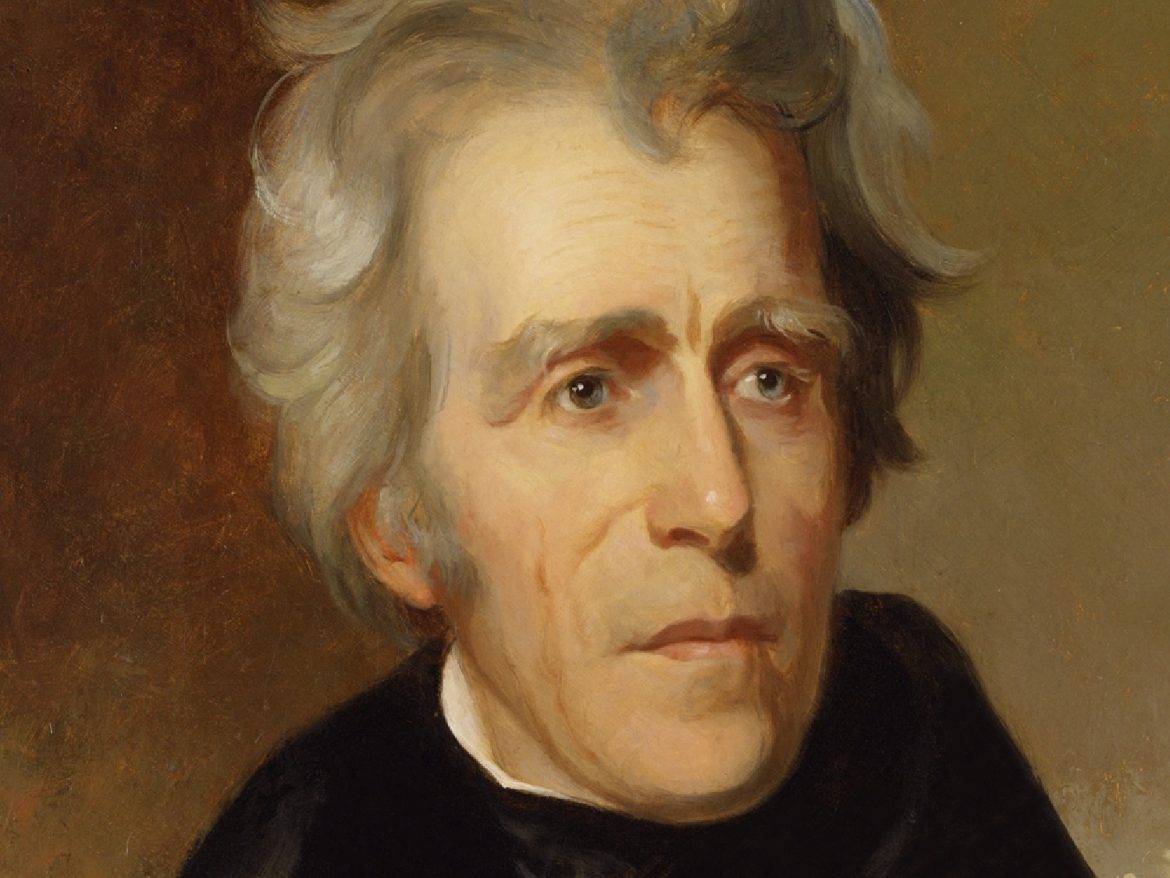 “He was loved, loathed, revered, reviled, but never ignored.” He was a giant in his own right, and a physically tall man (6 ft 1), weighing 144 lbs., with a size seven shoes that nobody could fill. His courage was legendary, having joined the Revolutionary battlefield at the age of 13, never shying away from brawls and duels.

His troops admired him for his courage and iron will and thus nicknamed him Old Hickory. Without formal training as a soldier, Jackson was elected general because people liked his strength, charm, and charisma, he was not a “Sunday Soldier.” He never asked tasks of his soldiers that he himself was not willing to do.

When Jackson called for enlistments in the coming war of 1812, he famously said, “… we are the born sons of America; the citizens of the only republic now existing in the world; and the only people on earth who possess rights, liberties, and property which they dare call their own.” (March 12, 1812)

His bold personality seldom considered consequences and he marched forth. He campaigned and appealed to the common man ideals thus transforming American politics.

Most renowned for the Battle of New Orleans, Jackson designed a victory that stunned the British. He was instrumental in the westward expansion at the cost of Indian removal from their lands.

Jackson was a firm Unionist, but his grandsons joined the Confederate Army during the Civil War. When he defeated the Creek Indians in 1814, the U.S. Army rewarded him with a commission as a Major General in the regular army.

Not far from the airport in Nashville, Tennessee, a “four-hour carriage ride from downtown Nashville” of long ago, is the former plantation and mansion called Hermitage as well as the Jacksons original log home in which they lived during the frontier era of America. Two natural springs still provide water today.

Archeologists had found evidence at the Hermitage that Indian cultures thrived here – projectile chiseled rock points were dug from different parts of the property. Two tornadoes and lots of historical changes have altered the Hermitage landscape over time. As the fortunes of the Jacksons declined after the Civil War and slavery ended, a public museum and a hospital for invalid Confederate veterans were created at the farm after 1889. (Museum Archives)

An archived deed shows that Jackson sold his riverfront home, Hunter’s Hill for $10,000 and used the money to buy the neighboring farm and to pay off debts. He invested in 1805 with other business partners into a general store, a tavern, a boatyard, and a horse breeding and racing operation at nearby Clover Bottom. The store sold goods from Baltimore, Philadelphia, and New Orleans such as cloth, buttons, blankets, nails, hoes, and comb cases. After two years of operation, the venture proved unprofitable, so he concentrated his efforts in agricultural production.

The original 425-acre frontier farm which he bought in 1804 from Nathaniel Hays for $3,400 eventually developed into a 1,000-acre cotton plantation where slaves picked cotton, 200-300 lbs. per day each until their hands were bleeding from the rough plant and then ginned it into 500-pound bales. At first, the seeds inside the cotton bowl had to be picked painstakingly by hand as well. Eli Whitney invented the first mechanical cotton gin in 1793 which made the lives of those picking cotton somewhat easier.

Andrew Jackson’s love for Rachel Donelson and their subsequent marriage in 1791 was marred by a lifelong scandal as it happened before Rachel’s marriage to her first husband had legally ended. Jackson remarried her in 1794. They are still together in death, buried in the “Greek-inspired garden tomb Andrew built for Rachel in 1831, where he joined her in 1845.” He was so grief-stricken by her sudden death that he refused to believe she was dead and had surgeons bleed her – there is a white nightcap stained post-mortem with her blood.

Jackson was a war hero and quite popular with “farmers, mechanics, and laborers.” They supported his presidency for two terms, upsetting the status quo and the elite Washington establishment. They derided him as having brought “muddy boots and common voices” into the White House.

Jackson was born on March 15, 1767, the same year and month his father died. Although very young, he participated in the Battle of Hanging Rock in 1780. A year later, both he and his brother Robert were prisoners of war and contracted small pox; unfortunately, his brother died. His mother Elizabeth died a year later in the cholera epidemic and Jackson was orphaned at the age of 14.

Andrew Jackson attained the impossible – he fought successfully against the world’s greatest power at the time in order to win New Orleans, the Jewel of the American West and the gateway to control the Mississippi River. New Orleans was a major trade port which connected America to the Gulf of Mexico. The British could potentially bring troops from Canada and split the nation in two parts.

His victory in New Orleans and the prior Treaty of Ghent (Belgium) that ended the war of 1812 set off a wave of nationalistic pride, celebrations, and parades. Jackson became a national hero, so popular that it carried him all the way to the White House. The wounded pride of America by the burning of Washington, the nation’s dignity, the uncertainty of its existence for three years, had been finally restored by Jackson’s victory.

Jackson’s earthworks in New Orleans, “built along a four-foot ditch stretching from swamp to riverside” for the purpose of installing cannon, were attacked at dawn on January 8, 1815. The British troops, 8,392 strong and well trained were overwhelmed by American cannon and sharpshooters with rifles and muskets. Their casualties mounted quickly, 291 killed, 1,262 wounded, and 484 missing. The American troops (5,359) suffered 13 killed, 39 wounded, and 19 missing.

Jackson’s army was a “ragtag of soldiers, sailors, militia, volunteers, Indians, and free blacks.” He had a short period of time to train these Americans to fight in battle as a regimented group.

Composers wrote music to celebrate his unexpected victory and his face adorned coins, medals, plates, pitchers, silk ribbons, handkerchiefs, posters, papers, and other memorabilia. He was the rock star of his day.

His success assured his reputation as an aggressive fighter which allegedly intimidated Indian tribes into ceding millions of acres of land, “setting the stage for the cotton boom in the American South.”  Jackson used bribery and force and pressured Spain to contract their empire. By 1821 when Jackson resigned his commission, “the United States – for the first time – stretched from Florida to the Pacific Northwest.” (Museum Archives)

The Hermitage is a National Historic Landmark. In addition to the mansion, the slave quarters, the President’s Tomb, the Jackson Family Cemetery, the First Hermitage, the Hermitage Church, and the beautiful acre garden, the mansion grounds and its 1.5-mile nature trail tell the story of the once working plantation.

The First Hermitage was a log two-story farmhouse in which Rachel and Andrew Jackson lived from 1804-1821. After they built the brick mansion, the log house was converted into a one-story house for the slaves.

The Ladies’ Hermitage Association planted a double line of trees in 1915 as an entryway for visitors coming in cars. Each tree came from a battlefield where Jackson fought – sugar maple, willow oak, black cherry, sweet gum, and cedar. It was called the War Road.

Rachel’s beautiful garden design has four squares with center flower beds. This style is the English tradition that dates to the middle ages.

President Jackson and his beloved Rachel are buried in the Greek revival tomb located in the right-hand corner of the garden. His tombstone reads simply, General Andrew Jackson. Jackson believed that the evil gossip about the circumstances of their marriage, and attacks from his enemies during his bid for the White House, caused Rachel’s stress and eventual death at the age of 61 on December 22, 1828. Witnesses said that he visited her tomb daily after his presidency ended. He was laid to rest next to her on June 8, 1845.

To the right of the President’s tomb, a simple headstone reads “Uncle Alfred.” Alfred Jackson was a former Hermitage enslaved worker who had requested that the Ladies’ Hermitage Association bury him next to Jackson’s tomb. He died in 1901 at the age of 98.

His cabin still stands as it was when he worked as a caretaker and guide for visitors. He had witnessed the rise and fall of the plantation and its turn into a shrine to Andrew Jackson. He was born at the Hermitage and worked as a wagoner in charge of horses and vehicles. After the Civil War, he rented 24 acres from the Jackson family and raised cotton and made butter for sale. He had moved into the log dwelling that became to be known as Alfred’s cabin. Alfred was well known and was often asked to pose for pictures with visitors.

The plantation was successful thanks to the hard sun-up to sun-down labor of more than 150 enslaved black men, women, and children. They tended the rotating crops, took care of animals, picked cotton, worked the fields, the smoke house, and everything else that was needed to run the farm and to care for the mansion’s occupants.

Crops of wheat, millet, oats, sorghum, and hemp provided supplies for the plantation. Cotton fields were planted for the Jackson family profit.

Three hundred acres of corn and pork provided diet staples for everyone at the Hermitage. Slaves also raised the Jackson family’s kitchen garden with varied vegetables and the fruit orchards. Jackson had encouraged slaves to cultivate their own gardens as well.

Based on archive lists, it is known that the enslaved lived in family groups, some of three generations. Duties ranged from tending to the smokehouse, the icehouse, butchered animals, plucked chicken, making soap and candles, doing laundry outdoors and cooking. Others cared for he distillery, the carriage house, the stables, the horse training, the cotton gin, the blacksmith shop, the carpenter’s shop, the corncribs, the weaving shop, the bathhouse, the animal pens, the paddocks, and the wood piles.

Even though Jackson treated his black slaves paternally and called them his “black family,” when Nashville was captured by Union forces in the Civil War, most of Jackson’s “black family” fled behind Union lines to freedom, preferring an uncertain future over perpetual bondage.

Slaves were property and archival documents show that Jackson had sold Maria Baker and her family in order to settle Andrew Jackson Jr.’s debts.

On November 7, 1829, Jackson wrote to Graves W. Steele, “But I say that I have concluded to retain you another year, it is on the express conditions that you treat my negroes with humanity, & attention when sick; & not work them too hard, when well – that you feed & clothe them well, and that you carefully attend to my stock of all kinds, & particularly to my mares & colts …”

Jackson built a cotton gin and press and made money by ginning his neighbors’ cotton for a fee. A receipt survives that shows cotton received at his gin and press from one John Donelson, Rachel’s brother.

The Nashville cemetery houses the tomb of Charles Dickinson. Following a disagreement with Jackson and a subsequent duel thought petty by many locals, Dickinson, a better marksman by all accounts, drew first and wounded Jackson in the chest but Jackson fatally shot Dickinson.  His death established Jackson’s reputation as a violent man which was used amply by his opponents during his presidential run. The incident was printed often on broadsheets.

Love him or hate him, our seventh president, Andrew Jackson, left a significant mark on the history of our country.