Brad Pitt and Angelina Jolie were married on August 23rd in a very small ceremony in France.  People Magazine will cover the story next week.    They have released this picture of the dress on the cover of their magazine [read_more].  The dress was designed by Donatella Versace. 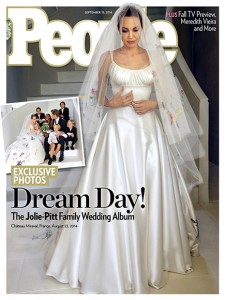 All six of the couple’s children participated in the wedding.  The children’s art work covered Jolie’s vail as seen in this picture on the cover of  UK’s Hello magazine. 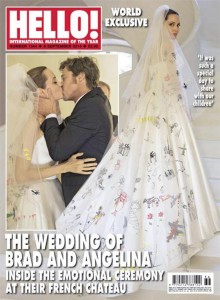