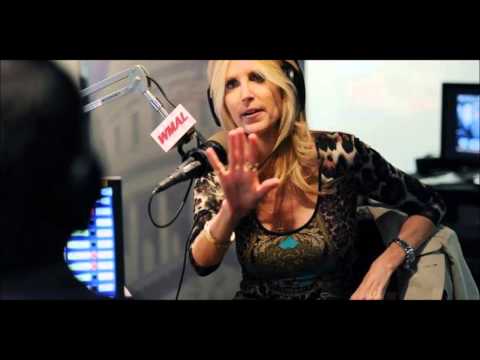 Not only does Ann Coulter think Donald Trump could win the Republican nomination and the Presidency, she also believes he would win the Presidency even as a third party candidate. From Joshua DeLeon over at Ring of Fire Radio:

“Trump is different,” Coulter said on WMAL. “We have been lied to for thirty years about immigration. That’s why Trump is striking this chord. He’s attractive. He’s tall. He’s hilariously funny. I think he could be not only a nominee who could win but a third party candidate who would win.”

John Fredericks keeps telling us that Trump is going to win the nomination and the election. I’m beginning to think he might be right.

But if he was a 3rd party candidate, say against Cruz and Hillary, he would give the election to his past wedding guest.

If Trump is not the nominee, Coulter said that she will vote for Hillary!

I tell onsite workers; why vote Republican ? Republicans and Democrats both want illegal aliens to exploit their labor , the Republicans will blame you when you receive unemployment for the job that you lost to illegal immigration. Democrats will feel guilty and extend you unemployment.
If Trump does not get the nomination , working class voters should vote Democrat .
Trump is the only Republican choice !

Dear Ann, Welcome to the bright side of life. Great Minds do think alike! John Fredericks

If the field remains this fractured through the early states, he may actually end up with a chance to win the nomination, though I still seriously doubt it. There is absolutely no chance in any way, shape, or form, that he will ever get elected President.

Stranger things than Donald Trump’s winning the nomination have happened. Jeb Bush is wildly unpopular with the conservative base. Hillary Clinton is a known liar and a likely law breaker. It is conceivable that Trump could win in a three-way race. I would hands down vote for him over Jeb Bush any day. The problem with you Establishment types is your failure to realize that the conservative rank and file is no longer willing to hold its collective nose while it votes for another Bush. It will not happen. People are so fed up that they are no longer willing to dance to the Establishment tune.

For the record, I’m not a Jeb Bush supporter; he’s not in my top five. I certainly would support him over Trump, given that Trump is pro-choice, pro-gun control, pro-tax increase, and pro-government-run healthcare. I understand he’s anti-immigrant now, but until recently he was also in favor of a pathway to citizenship and called Republicans “mean-spirited” on the issue. So I don’t know what to say about a “conservative” base that supports a liberal.

Is Ann Coulter still a thing ? Is Michael Moore going to endorse someone too ? It’s all so 2006.

Coulter didn’t do herself any favors by bashing Libertarians.

It would be interesting to know how many of the grassroots who support Trump are willing too, and have sent him a campaign check. One of the problems with the grassroots is that they will not pay up to support their guy.

I doubt Trump will risk a third of his net fortune on the Presidency unless he is convinced that he is a sure winner. If Trumps rich buddies support him financially, then, you can bet he is lying about his stance on illegal immigration.

I appreciate Trump sparking debate, but he isn’t anywhere near my top list.

The Third Party talk is all silly innuendo. He’ll be the nominee.

So, say that Trump is the nominee? Does he win against………?

Does Trump win against Hillary?

I was stabbed in the back by McDonnell , Bush and by that Perversion of Representation
Ken C.
I did send Bush a letter on Immigration compromise : my family , friends and neighbors jobs are not up for compromise with me. If I send you 100.00 dollars can I have my votes back?