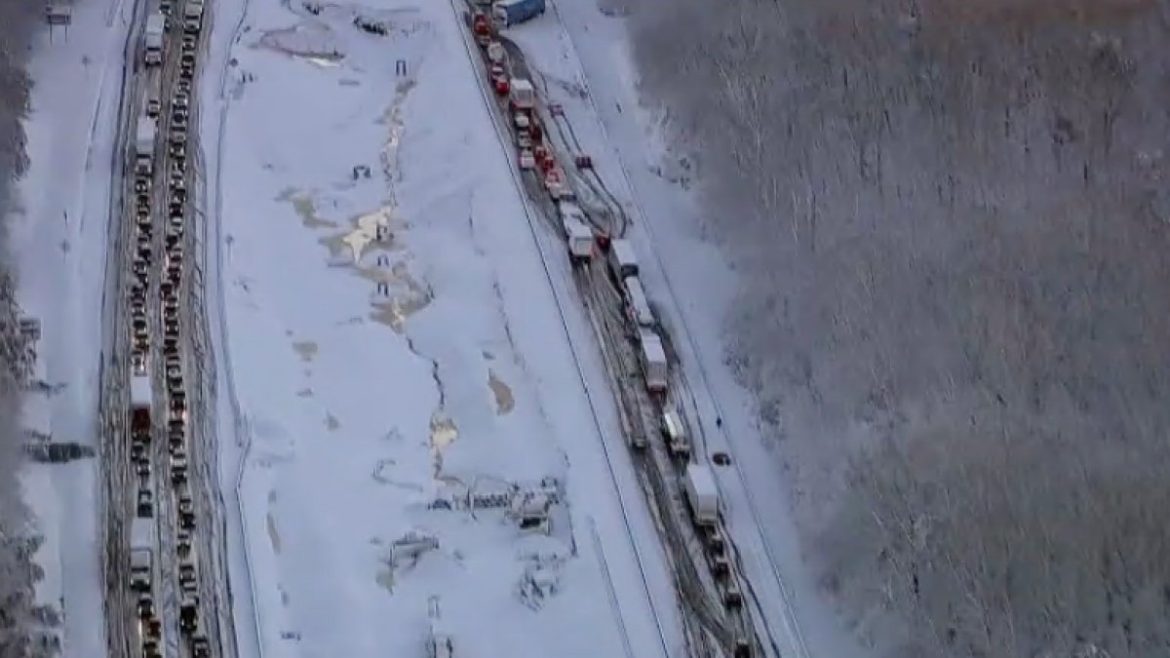 Motorists stranded on I-95 (source: nbcwashington.com)

Motorists are still stranded on I-95 since early Monday morning and this has been the Governor’s only response:

Go to the page and read the comments, many of the commenters are still stuck in the massive traffic jam near Fredericksburg that began on early Monday morning when numerous tractor-trailers caused a huge accident. Traffic has been backed up in both directions for 50 miles. Some people have given up, abandoned their cars, and walked down the highway to points unknown.

Northam has said “warming stations” were being opened but that does little good for those who are stuck in traffic and cannot move their cars. Some people have gone over 24 hours without food or water.

Senator Tim Kaine was trapped on I-95 for 27 hours.

Northam says he has the national guard at his disposal but he has not explained why they have not been called in. As of this afternoon, the guard still has not been called. The Governor cannot say when the road will be cleared but VDOT is hoping to have the road cleared by tomorrow morning’s rush hour.

There ya go, Northam has declared a state of emergency for the 3 inches of snow predicted for tonight.

Talk about your literal snowflakes, sheesh

I think Northam is a horrible governor, but how about some personal responsibility for the drivers who chose to drive during a winter storm that everyone had advanced notice of?

Conservatives love to talk about personal responsibility, but so many of them run home to the government for help when there is an event like this snowstorm, demanding the government save them from their bad decision to drive. Why is that?

Canâ€™t leave thumbs up anymore so:

Less whining, more personal accountability. The forecast was spot on with plenty of notice.

This lies squarely at the feet of Transportation Secretary Democrat Pete Buttigieg and Virginia Transportation Secretary Democrat Shannon Valentine.
On a lighter note it is now said that Democrat Senator Tim Kaine was stranded in the Executive debacle for 17 hours.
This is a testament to the fact that elected Democrats are â€œ the Americans that donâ€™t want to workâ€
I hope that in the end they were plowed out by a Trump supporter sub contractor.
Bring on more snow!

Incompetence leads to failure. It is the hallmark of Democrat policies and politicians. Did anyone expect anything different from the Democrats this time?

I heard that by the time they could have been ready, they wouldn’t be needed. I-95 is clear, crisis is over.No one predicted the storm’s intensity. So that is why.

That’s an interesting excuse. Why have a National guard if they can’t mobilize within 12 hours?

They would really need to be in place, at the armory, before it started. If they weren’t mobilized prior to the well-advertised storm then it will take awhile. The guard is not on standby unless they get ordered. I’m not sure *exactly* what they would do. VDOT should have all the road clearing equipment. I’m not sure, except as a gesture, that the National Guard really has any role in cleaning this up.

I used to live in Pennsylvania. About 10 years ago Gov. Ed Rendell suffered a similar catastrophe with an ice rain storm that put about 4 inches of ice on I-81. Penndot, having had a warning, failed to sand/salt the roads prior to the storm. I think the Secretary of Transportation lost his job on that one.

why don’t you learn how it works in real life? You cry crisis every time a Democrat blows their nose. Such typical gop hysterics

Why do you let this guy post here. He said F you to one of your authors.

Defending the indefensible as usual.

I was waiting to hear that northam was in the outer banks, fairfax was in barbados
and herring was at the drag bar with aoc in south beach.
that was this administration’s good bye gift to the state.

Or maybe he will hang out with Bill Clinton on the Epstein sex plane.