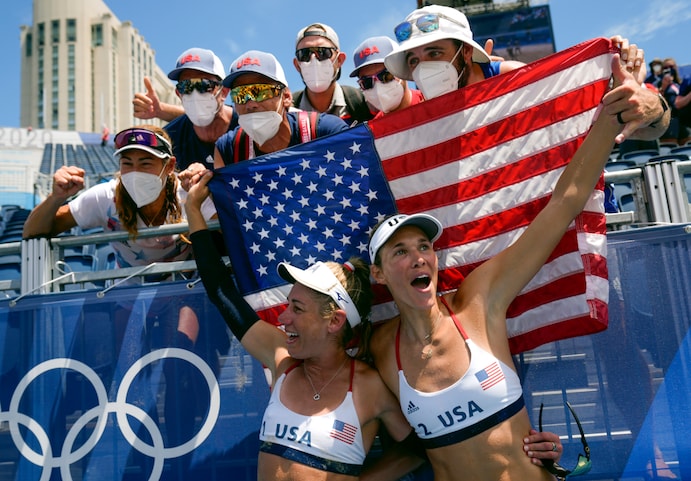 Californians April Ross and Alix Klineman won the Gold medal in beach volleyball -- and more primetime coverage than other sports. Was it sexploitation? (photo source: Washintonpost.com)

Another reason to boycott watching the Olympics: Sexploitation

Like a number of conservatives, I vowed not to watch the Summer Olympics on NBC because of the politics, American flag dissing, dumbass rules that barred an American runner athlete for smoking a joint but allow a trans man to compete with women in weightlifting, plus the rampant hype, commercialization and exploitation of children, whom I believe should not be allowed to compete given the Larry Nassir scandal

But I am staying with family in Northern Virginia this week, and so the games were on TV, and I caught a glimpse of NBC’s coverage between Facebook posts on my laptop.

I noticed this – much of the prime time coverage was of the scantily clad sports – namely, swimming, diving, beach volleyball and gymnastics. Hardly much coverage to track and field and soccer.

My fears of Olympic voyeurism were confirmed when I learned the Norwegian women’s handball team was fined for not wearing bikinis    Talk about a sexist rule, but no rule that you have to stand for your national anthem?

The online mag,  Slate, reported   the excessive coverage of swimming and gymnastics, was because “swimming and gymnastics have a structural advantage relative to track in that regard. Whereas the top track stars compete in one, maybe two events over an entire Olympics, the top gymnasts and swimmers each Olympics compete in multiple events spread out over multiple nights. This means that NBC can produce teasers and create suspense over the course of a week, encouraging viewers to familiarize themselves with and get invested in those top swimmers and gymnasts.”

The key word in Slate’s analysis is “tease.”

So, my hunch is NBC, worried about the bad ratings for this COVID-delayed 2020 games, focused on the scantily clad sports for that reason – sex sells,  particularly in this day with people switching channels back and forth and passively looking at their social media feeds

Sad to say, but the news media is all about glitz and glamor and sexploitation.

And NBC confirmed this for me, by running this article following the 2016 Rio Olympics by Rain Dove, described as an “androgynous” athlete.

In the article, “Sexploitation in Athletic Uniform,” Dove shows off pictures wearing both male and female athletic apparel, writing:   “I think some [uniforms] are designed for the actual sport and some are designed specifically to sell the sport,” Dove said. “People want to watch women [athletes] not because of their skills but because of their bodies.” .

According to this survey, more men than women watch women’s sports, by about 5 percentage points  But the Olympics do draw a significant female viewership, more than other sports on TV.

In addition, this year’s games have more female than male athletes, plus  160 who are openly LGBTQ

But to bar women from playing because they are not in bikinis says something, which is why these games are not worth the time to give “fake news” NBC a  ratings boost.  Congrats to the USA team for winning the most medals so far.

C’mon man. Bet you also didn’t “notice” the pictures in Playboy either

Wow! Ken and I agree. You almost sounded like a liberal there for a minute. Btw, there are many alternative avenues to watching the olympics that avoid the mass advertising NBC channel. I was done with it when they cut away to a commercial in the middle of a race. The bikini-clad volleyball exploitation is just wrong. Almost as bad as the NFL, eh Ken?! But those two young ladies certainly kicked some ass. Hopefully next time around they can wear some clothes while they do it. Your point about risks and threats to the youngest is also well taken. Good on Simone Biles for sticking up for herself. The youngest Chinese diver, while certainly impressive, was also disturbing, imo.